One candidate says she gets spotlight over those declared 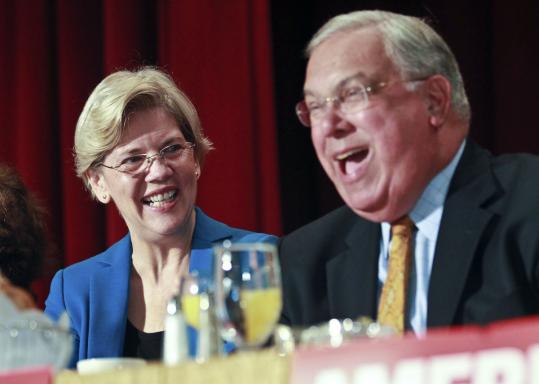 Elizabeth Warren has yet to officially declare that she is running for US Senate, but the former presidential aide took another step yesterday toward fortifying her position as the choice of the Democratic establishment - a trend that is beginning to wear on the Democrats who have already entered the race.

Introducing Warren at the annual Labor Day breakfast yesterday, the president of the Greater Boston Labor Council compared her to the late Senator Edward M. Kennedy, while the state’s top union and Democratic political leaders stood and applauded her fiery keynote address at the event.

It was her most public introduction to date after a month of invitation-only house parties. But she has yet to face audiences outside her party’s core liberal base.

Three of the other Democratic candidates in the field trying to unseat Republican Scott Brown were left to mingle on the sidelines of the Park Plaza ballroom as Warren stood beside Mayor Thomas M. Menino, Lieutenant Governor Timothy P. Murray, and other party notables on a stage in front of about 500 union leaders.

One candidate - Bob Massie - complained openly that Warren had been given the highprofile position with more than a year left before the Democratic primary that includes six declared candidates.

Warren received the most sustained applause at the end of her 20-minute speech, when she spoke directly about a potential candidacy.

“Whether I fight as an outsider or I fight from the floor of the Senate,’’ she said before she was interrupted by an ovation, “I will continue to stand for you.’’

A Harvard professor unknown to most of the electorate, Warren delivered a speech emphasizing her working-class roots and her history as an advocate who fought banking lobbyists to establish a consumer protection agency on behalf of President Obama.

Amid Republican opposition, Obama ultimately passed her over this summer for the job leading that agency.

Yesterday, Warren sprinkled her speech with anecdotes intended to present herself as a regular person, talking about the backyard barbecue she attended last Labor Day with family in Plymouth.

She spoke about her brother, a retired crane operator and joked to the crowd that he had warned her not to embarrass herself in front of his fellow union members. And she told her “David beats Goliath’’ tale about how she took on the Wall Street banks.

It was a talk clearly tailored to the union audience. She said expanding the right to unionize will be one of her top three priorities - along with education and construction investment. She also listed renewable energy, science research, and “a level playing field for small businesses’’ as other goals.

The president of the labor council, Louis Mandarini, spoke for several minutes about the warm, personal relationship that organized labor had with Kennedy, who was replaced by Brown last year when he won a special election.

Mandarini said that after spending almost an hour with Warren last week, he came away feeling that - much like Kennedy - “she understands us.’’

Warren’s Democratic competitors have yet to challenge her directly.

But Massie, a former candidate for lieutenant governor, said yesterday that he had spoken with the labor council after learning that she would deliver the keynote address.

“I hope that the labor movement shows the same kind of fairness that they expect for themselves and gives others the same opportunity to speak and represent themselves as [they do] Elizabeth Warren,’’ he said. “Inviting her to speak and saying that she’s not a candidate is a technicality at this point.’’

Massie said he did not want to see another union endorse Warren without first speaking with him and the other candidates, as the Massachusetts Nurses Association did last month.

“I’m surprised that Elizabeth Warren did not issue some caution herself about the process that should be open and fair,’’ he said.

Other candidates in attendance, City Year cofounder Alan Khazei and Mayor Setti Warren of Newton, did not criticize the event’s organizers. But they still had questions, according to Rich Rogers, executive secretary of the council.

“We invited Elizabeth Warren because she’s a national figure who took on Wall Street,’’ Rogers said. “If she’s a Senate candidate, great.’’

The other candidates sound increasingly willing to cast Elizabeth Warren as an establishment choice, presenting themselves as the grass-roots alternative.

“I’ve been out there for 13 weeks, 90 stops in the last 13 weeks,’’ Setti Warren said yesterday as he worked the crowd.

Khazei, the most successful fund-raiser on the Democratic side, said he would welcome Elizabeth Warren to the race if she decides to run, but then tried to draw a contrast to her standing as an establishment choice.

He said the only way to move the logjam in Washington is to build a new citizens’ movement to counter the Tea Party movement.

“I have been working 25 years from the grass roots up,’’ he said. “My focus is on finding solutions that are from the community.’’