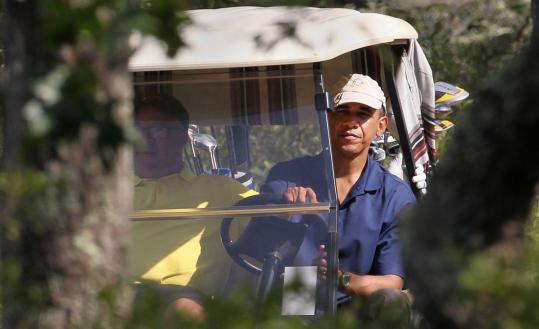 EDGARTOWN - If his comings and goings yesterday are any indication, President Obama will be keeping a very low profile during his Martha’s Vineyard vacation.

On Day 1 of the first family’s nine-day stay on the island, Obama remained mostly out of sight, not emerging from Blue Heron Farm until 12:15 p.m., when his motorcade headed into Vineyard Haven and a visit to Bunch of Grapes Bookstore. (Daughters Sasha and Malia walked out with a bag containing, among other books, David Gessner’s “My Green Manifesto: Down the Charles River in Pursuit of a New Environmentalism,’’ which we recommended Obama read in our column this week.)

But it was later, at the Vineyard Golf Course in Edgartown, where the president’s recalcitrance was most evident. Approaching the eighth tee in a golf cart with friend and frequent golfing buddy Eric Whitaker, the president noticed three TV cameras and a Globe photographer across the street. Rather than stop and be photographed teeing off, the president skipped the hole.

Nor did the president show up at “Voices for Obama,’’ a fund-raiser for his reelection campaign held the night before. The commander in chief was, in fact, just arriving at his deluxe Chilmark digs as 300 supporters - each of whom paid $100 - were filing into Union Chapel in Oak Bluffs. The event, organized by Northampton attorney Tom Lesser with an assist from Art Buchwald’s daughter-in-law Tamara, included talks by Pulitzer Prize-winning novelist Geraldine Brooks, Harvard Law professor Alan Dershowitz, and former White House counsel Greg Craig, among others.

Brooks, a longtime islander, acknowledged that she’s been disappointed with the president at times, but nonetheless supports him. She recalled knocking on doors for Obama in subzero temperatures - on her wedding anniversary, no less - before the New Hampshire primary in 2008. On at least one occasion, Brooks said, a Granite State resident answered the door and she could see an assault rifle lying on the couch.

Afterward, it was off to the Oak Bluffs abode of Ron and Judy Davenport, founders of Pittsburgh-based Sheridan Broadcasting, where 170 guests, each of whom contributed between $500 and $2,500, wined and dined. While Democrats like to call themselves the big-tent party, they could have used a larger awning on this night. “We were sold out,’’ Lesser said afterward. “There was a huge buzz and rush for tickets.’’

Organizers held out hope that Obama might make an appearance, but it was not to be.

“My personal belief was that he wasn’t going to make it,’’ said Lesser. “It might have been different if it was his second, third, or fourth night on the Vineyard.’’

Asked about the optics of Obama vacationing on Martha’s Vineyard while the economy is reeling, Lesser said the president is never on vacation.

The president’s visit is definitely snarling traffic on the island, but it does not seem to be interrupting people’s vacations: David Letterman looked mighty relaxed as he exited the Katama General Store with a newspaper. The “Late Show’’ host waved to passersby, jumped into his Jeep, and drove off.

Amid all the henna tattoos, tempura, and maple-sweetened lemonade at the Martha’s Vineyard Agricultural Fair, it was the blazing heat - not the president - people were talking about yesterday. His shirt drenched with sweat as he stood next to a wood-burning stove cooking pizzas, Eric Hutchinson, managing partner of Flatbreads, said he emptied a keg of root beer by midday. “We’re getting beat up, to be honest,’’ said Hutchinson, “but it’s all good.’’