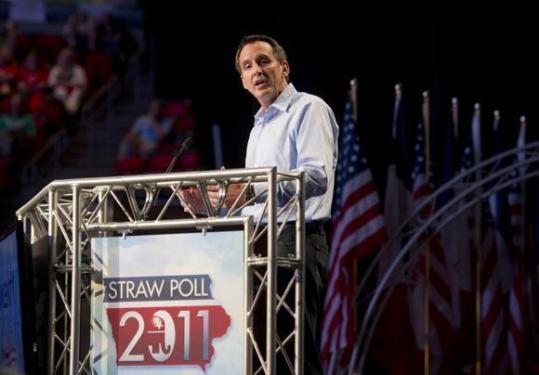 ST. PAUL, Minn. - On paper, former Minnesota governor Tim Pawlenty seemed to have all the right ingredients as a Republican presidential candidate.

His blue-collar upbringing offered him a natural rapport with middle-class America. He governed as a fiscal hard-liner in a left-leaning state, winning his second term in a year when Republicans elsewhere got drubbed. He made inroads with the right crowds and assembled an all-star cast of advisers with loads of presidential campaign experience.

Pawlenty ran a traditional operation. In the lead-up to his campaign, he spread checks around to local politicians in key states through a political action committee while emphasizing on small-scale events in places such as Iowa and New Hampshire.

But Pawlenty struggled to connect. He came off as bland and rehearsed next to more dynamic contenders. He languished in the polls. The candidacy of Governor Rick Perry of Texas shoved Pawlenty further to the side.

Pawlenty, 50, dropped out of the race for the GOP nomination yesterday, hours after finishing a disappointing third in the Ames Straw Poll in Iowa. He had struggled to gain traction in the state, which he had said he had to win.

“I wish it would have been different. But obviously the pathway forward for me doesn’t really exist, so we are going to end the campaign,’’ Pawlenty said on ABC’s “This Week’’ from Iowa shortly after disclosing his plans in a private conference call with supporters.

Pawlenty tried to turn up the heat on President Obama and his Republican rivals. But it often came across as unnatural, and he never was able to stoke the passions of voters.

“What I brought forward, I thought, was a rational, established, credible, strong record of results, based on experience governing - a two-term governor of a blue state. But I think the audience, so to speak, was looking for something different,’’ he said.

In recent weeks, he waned under the rise of Tea Party favorite Michele Bachmann, whose rallying cry is a sure-fire applause line about making Obama a one-term president, and libertarian-leaning Ron Paul, as well as the promise of Rick Perry, the sharp-tongued Texan who entered the race Saturday.

“I thought I would have made a great president,’’ Pawlenty said. “I do believe we’re going to have a very good candidate who is going to beat Barack Obama.’’

He did not immediately endorse a candidate.

Bachmann was quick to praise him, perhaps mindful of the need to broaden her appeal and reach his backers, who span the ideological spectrum.

“I wish him well,’’ Bachmann said. “He brought a really important voice into the race, and I am grateful that he was in. He was really a very good competitor.’’

Pawlenty, the two-term former governor of a Democratic-leaning state, was on Arizona Senator John McCain’s short list for the vice presidential spot in 2008.

He had spent roughly two years laying the groundwork for his 2012 campaign and had hoped to become the alternative to the national front-runner, former Massachusetts governor Mitt Romney.

But this summer he unexpectedly found himself in a grudge match with Bachmann, the Minnesota congresswoman who shot to the top of polls in Iowa after getting into the race.

Pawlenty poured most of his cash and time into Iowa in the run-up to Saturday’s straw poll, a test of organizational strength and popularity in the state whose caucuses lead off the GOP nomination fight.

He had acknowledged that he needed a strong finish to show momentum and quiet concerns that his campaign was faltering. But Bachmann won with 4,823 votes, while Paul got 4,671. Pawlenty received 2,293.

Pawlenty said his message “didn’t get the kind of traction or lift that we needed and hoped for coming into the and out of the Ames Straw Poll. We needed to get some lift to continue on and to have a pathway forward. That didn’t happen.’’

Even after the poll, Pawlenty suggested to supporters late Saturday that he was not quitting. He called the test vote here “an important first step on the road to the Republican nomination.’’