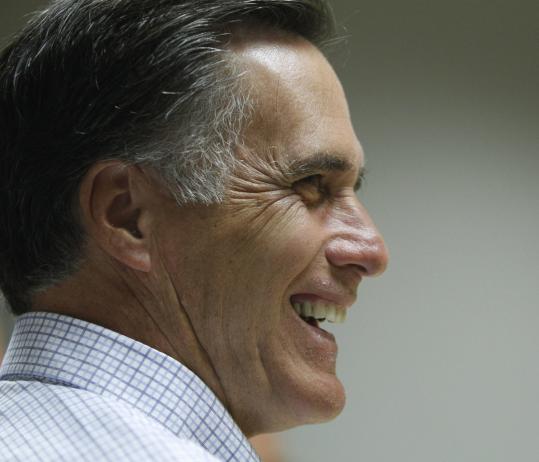 MITT ROMNEY - Highly active and orthodox, he was a top local lay leader for years in Massachusetts and has publicly embraced his church and his faith.
By Lisa Wangsness Globe Staff / August 15, 2011

SALT LAKE CITY - Republican presidential primary rivals Mitt Romney and Jon Huntsman are both Mormons whose ancestral roots run deep into the church’s pioneer history - intertwining, in fact, several generations back. Relatives of both men have served near the top of Mormonism’s global hierarchy.

But in public remarks they have drawn strikingly different religious self-portraits. Romney is highly active and orthodox - he was a top local lay leader in Massachusetts for years, and he has embraced his church unequivocally: “I believe in my Mormon faith and endeavor to live by it,’’ he said in a major speech in 2007.

Huntsman has called his adherence to Mormon practices “tough to define.’’ He has described himself as more spiritual than religious and as someone who gets “satisfaction from many different types of religions and philosophies.’’

The former Utah governor’s seeming ambivalence has surprised and disappointed many members of the Church of Jesus Christ of Latter-day Saints, some of whom have questioned whether Huntsman is trying to distance himself from his church for political gain. But others welcome his ambiguity: For them, it highlights a growing debate about whether this relatively new religion can accommodate a more elastic definition of what it means to be Mormon.

“Normally it’s either all in or all out - that’s both how Mormons view themselves, and that’s how people view Mormons,’’ said John Dehlin, a Mormon from Logan, Utah, whose “Mormon Stories’’ podcast (mormonstories.org) has drawn a growing audience of nontraditional and ambivalent Mormons. “Liberals and progressive [Mormons] were elated at Huntsman’s characterizing himself that way, at least the ones I know, because it helps contribute to opening up the discourse about unorthodox Mormonism.’’

Some of the questions gripping Dehlin’s audience are unremarkable in older faiths but still provocative in Mormon circles. In a strict church that asks much of its members, is it possible to be selectively observant, yet still a part of the community? Is there such a thing as a “cafeteria Mormon’’ - as some engaged in the debate have described a person who embraces some church teachings, but rejects others? Do some Mormons, like secular Jews, share cultural and genealogical bonds that remain intact even when religious beliefs fray?

Huntsman “may be living a brand of Mormonism that doesn’t have a name for itself yet - the equivalent of reform Mormonism,’’ said Joanna Brooks, a literature professor at San Diego State University and a Mormon who blogs on religion and culture at religiondispatches.org. That is, she said, “someone who is culturally Mormon, who identifies with the tradition, who has been shaped by Mormon thought in his upbringing, but doesn’t necessarily maintain orthodoxy on doctrinal beliefs.’’

Both candidates declined to be interviewed for this article.

Until this spring, most Utahans assumed Huntsman was an ordinary orthodox Mormon. Religion had rarely come up in his previous campaigns. His family’s prominence in the church seemed to fill in any blanks; Huntsman’s father, Jon Sr., is a regional church leader, and his late grandfather was a member of the Quorum of the Twelve Apostles, who serve as top global authorities under the church’s president and two counselors.

“It was, ‘Oh, he’s Mormon.’ And that’s it,’ ’’ said Quin Monson, a political scientist at Brigham Young University and a Mormon.

Huntsman does not appear to be estranged from the church. Friends and associates say that before he became ambassador to China, he often attended services at his local ward, or congregation, in Salt Lake City. And US Representative Jason Chaffetz of Utah, Huntsman’s former chief of staff, said that during his first gubernatorial run, Huntsman taught a class to prepare young men for the lay priesthood.

But well before he jumped into the presidential race, Huntsman showed signs of being less orthodox than some assumed. Huntsman has long displayed a notable interest in other religions; as governor he made a point of worshipping with many congregations, often with his family in tow.

Steve Price, a close friend, describes Huntsman as “very, very broad, and very progressive’’ in his intellectual, political, and social worldview. As governor, for example, he made headlines by supporting civil unions for same-sex couples.

“Of all my LDS friends, Jon for sure is one of the most moderate,’’ he said. “Religion never came up in any conversation I’ve ever had with him. Not one time, ever. That’s unusual.’’

Huntsman’s children have also diverged from orthodox Mormon traditions. Young Mormon men are strongly encouraged to serve two years as missionaries - all five of Romney’s sons did so - but Huntsman’s two eldest sons have not served missions. (One is a student at the US Naval Academy, the other will attend the Naval Academy Preparatory School in Rhode Island this fall.) His daughter Abigail married a non-Mormon last summer. And Huntsman has said he is exposing his younger adopted daughters, one from India and one from China, to their native faiths, Hinduism and Buddhism.

“Today there are 13 million Mormons. It’s a very diverse and heterogeneous cross section of people,’’ Huntsman told ABC’s “Good Morning America’’ this spring. “And I probably add to that diversity somewhat.’’

Indeed, as San Diego State’s Brooks has observed, what may appear to outsiders as a monolithic community is less so up close. A 2009 Gallup poll found that active Mormons in the United States had the highest weekly church attendance of any major religion, but a significant minority - about 20 percent - of respondents who called themselves Mormon seldom or never attended services.

Many in this group may nevertheless described themselves as proud of their Mormon roots, particularly those who, like Huntsman, are descended from old Mormon families. For the greater part of a century, Mormons lived in isolation in the intermountain West and developed tight-knit cultural and kinship networks.

“If you are a Mormon person of Anglo and Scandinavian descent, with pioneer ancestors among all your grandparents . . . then you have probably experienced Mormonism as an ethnicity,’’ Brooks said. “There are culturally recognizable Mormon names, Mormon foods. Mormonism is like a language you learn to speak.’’

But the church, which places a strong emphasis on doctrine, organization, and hierarchy, does not make it easy to be a casual member. “It’s hard to be halfway involved and not get sucked in or pushed out,’’ Monson said. “If you are showing up at church, you are going to get asked to participate. People are going to say, ‘Hey, can you give a talk at church on Sunday, can you bake a cake for the funeral?’ . . . And if you keep saying no, it’s uncomfortable.’’

Doubts about church doctrine can also be difficult to negotiate for Mormons, who, when speaking in church, often conclude with the words, “I know this church is true.’’

Mormons believe that an angel revealed gold plates containing a new scripture to Joseph Smith, the son of a farmer in upstate New York, in the 1820s. That scripture, eventually published as the Book of Mormon, records the history of ancient civilizations of North America and Jesus’ visitation to the New World after his resurrection.

In the past decade, the Internet has made historical and archeological critiques of the Book of Mormon and other texts Smith published more widely available. The online world has also given questioning Mormons an opportunity to voice misgivings about the literal truth of the scriptures, as well as other issues, such as church teachings on homosexuality and the role of women. Although such discussions are welcome in some wards, they are less so in others, and in rare cases, the Mormon church has disciplined members who have publicly challenged Mormon teachings.

Elder L. Whitney Clayton, a member of the First Quorum of the Seventy, a council of worldwide Mormon leaders, said in an interview that strength of religious conviction among individual Mormons varies, but those who are active tend to be firmly grounded in the faith - he said he had never heard the term “cafeteria Mormon’’ or anything similar.

But, he said, “it’s not like we have belief police running around.’’

A “Mormon Stories’’ gathering in Salt Lake City this summer vividly illustrated the difficulty some Mormons encounter in negotiating what conference organizers called “an open approach to Mormonism.’’ A number of participants broke down in tears as they described the conflict they felt between their attachment to, and differences with, the church.

“There is something about the community and the tradition,’’ said one woman who spoke. “Something you can’t wash out.’’

How Huntsman’s less orthodox Mormonism will affect him politically remains unclear. Romney, for instance, has faced skepticism from some evangelical Christians who are uncomfortable with his Mormonism.

In Huntsman’s case, some political observers believe his more moderate approach could help him in a general election among socially progressive independents who associate Mormonism with conservative politics. But the GOP primaries come first, and it is less clear that evangelical Christian voters who have theological differences with Mormons will find Huntsman’s brand of Mormonism reassuring.

“That probably helps in Boston; it doesn’t help down here,’’ said J. David Woodard, a political scientist at Clemson University in South Carolina, whose early Republican contest draws a heavy evangelical turnout. “They respect you if you’re Catholic, if you’re Jewish, if you’re Mormon. But if you’re kind of postmodern-spiritualist, then you’re really in trouble.’’

Kenneth Foster, a communications professor at the University of Utah, thinks most voters will miss the nuance altogether.

“To the outside world, which knows nothing about Mormonism, how are you going to delineate ‘I’m a sort-of-active Mormon?’ ’’ he said. “We can’t even delineate that internally. It’s going to be, ‘Are you, or are you not?’ ’’

Lisa Wangsness can be reached at LWangsness@globe.com.