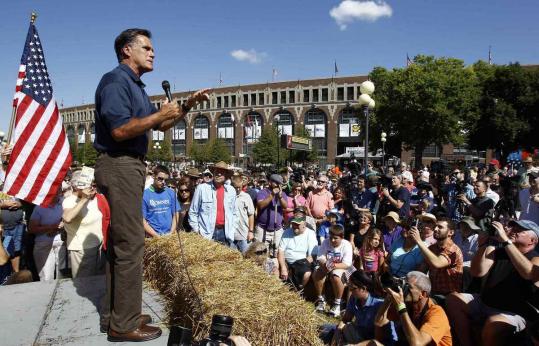 A disclosure by Mitt Romney’s campaign yesterday showed he may be the wealthiest person in the 2012 presidential race, far and away eclipsing President Obama’s net worth. (Jim Young/Reuters)
By Matt Viser Globe Staff / August 13, 2011

DES MOINES - Republican presidential candidate Mitt Romney is worth between $190 million and $250 million, his campaign said yesterday after filing a personal financial disclosure statement with the Federal Election Commission.

That dollar figure would likely make him the wealthiest candidate in the 2012 White House race, far and away eclipsing President Obama. His only possible GOP rival is former governor Jon Huntsman of Utah, who has yet to release his disclosure form and is among the heirs to the fortune.

Romney’s disclosure form provides the most detailed look yet at the former venture capitalist’s finances during the past four years; it shows his net worth essentially unchanged over that time. His campaign provided no details about movement within that range.

The former Massachusetts governor has never released his tax returns, which would offer a fuller picture of his fortune, and has declined requests to do so this year.

Romney, who was criticized earlier this year for telling a group of voters that he was “unemployed,’’ earned nearly $114,000 from being on the board of .

In the past year, Romney also received more than $374,000 in fees for nine speeches, including from some financial firms that he has sought to protect from more government regulations. For those speaking engagements, he was paid in a range from $11,475 to speak at Claremont McKenna College in Claremont, Calf., to $68,000 to speak at the National Franchisee Association in Las Vegas.

He was also was paid speaking fees by , GoldenTree Asset Management, HP Healthcare Services, and Quest Educational Foundation. A Get Motivated Seminar, via satellite link in Boston, yielded $29,750.

“He has occasionally received compensation for speeches, and those have been disclosed in accordance with the law,’’ said Gail Gitcho, the Romney campaign’s communications director.

His wife, Ann Romney, owns horses in California worth between $250,001 and $500,000, according to the forms. She has promoted the use of horseback riding as a therapeutic way of coping with multiple sclerosis, from which she suffers. The horses she owns compete and earn prizes, according to Gitcho, so they are required to disclose Romney’s share of the company that owns them.

The Romneys also have investments in a wide range of areas, including consumer staples such as electronics and office supplies, large oil companies, and financial, health care, and telecommunications companies. His stock portfolio includes investments in , McDonald’s, , , and .

His investments are held in a blind trust, which he created when he became governor in January 2003. The trustee is Brad Malt, a partner at the Boston office of the law firm Ropes & Gray.

“They do not control the investment of these assets,’’ Gitcho said in a statement. “The assets are under the control and overall management of a trustee.’’

The Romneys have more than $1 million invested in Solamere Founders Fund, which is run by one of their sons, Tagg. They also hold between $250,001 and $500,000 in gold metal.

Romney shed some of his investments from corporations that had interests that conflicted with his political views, which caused problems for him four years ago when it was revealed that he was reaping profits from corporations involved with Iran, China, and human embryonic stem cell research. At the time, Romney said he would instruct the trustee of his blind trust to make sure his investments conformed with his political positions.

The Associated Press reported yesterday that while that may be true from Romney’s own investments, a family charity, the Tyler Charitable Trust, continued to buy and sell investments in companies that dealt with Iranian businesses, complied with censorship in China, or aided in stem cell research.

The form filed with the election commission yesterday indicated that the Romneys had financial holdings in a range of $85 million to $264 million. The campaign said a more accurate range was between $190 million and $250 million but would not specify any further detail.

Romney so far has not put any of his own money into his presidential campaign, as he did four years ago. About half of the holdings four years ago belonged to Mitt Romney and theoretically could have been liquidated and used for his campaign. The other half belonged to his wife. The campaign yesterday would not say whether the split continues to be about half-and-half.

All federal candidates are required to file the disclosures within 30 days of declaring their candidacies, but they can seek two 45-day extensions, which Romney did. That meant Romney’s forms were due not only on a Friday - typically a day when politicians announce news they do not want to promote - but when the political class was consumed with today’s Iowa straw poll.

Meanwhile, Sarah Palin descended yesterday on the Iowa State Fair, walking through buildings filled with cattle as a crush of reporters surrounded her and her husband, Todd. The 2008 GOP vice presidential nominee continued to stoke speculation that she will enter the presidential race.

“Still a potential. Still thinking about it,’’ she told reporters yesterday. “There is still plenty of room in that field for common-sense conservatives who have executive experience and aren’t part of the political machine that’s caused the problems.’’

Not all of the candidates have filed their personal financial disclosure forms. Obama reported assets earlier this year worth $2.2 million to $7.5 million, much of it coming from royalties from his books, “Dreams From My Father’’ and “The Audacity of Hope.’’