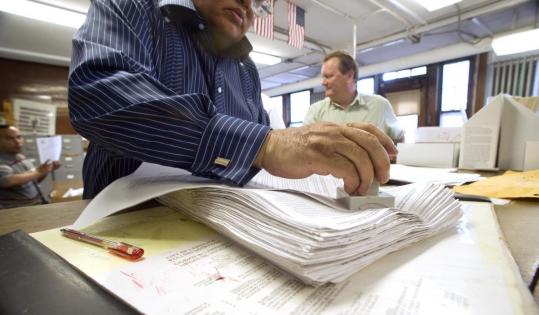 LAWRENCE - The controversy surrounding Mayor William Lantigua intensified yesterday when an opposition group filed a recall petition with thousands of signatures aimed at ousting the state’s first Latino mayor less than two years into his term.

Carrying a US flag, the group marched into Lawrence City Hall to deliver a thick stack of signatures, following months of intrigue and FBI and state investigations into Lantigua. The defiant mood contrasted sharply with Lantigua’s historic victory in November 2009, when the mostly Latino city erupted in joy.

The city clerk must review the petitions to verify that all the signatures are valid and come from Lawrence voters.

Recall organizers, a mix of Latinos and Anglos in this former mill city of more than 70,000 residents, say Lawrence needs a new leader to confront rising crime, struggling schools, and an unemployment rate of nearly 17 percent - the highest in the state.

Yesterday, recall organizers said they submitted a few hundred more signatures than the 5,232 required to place the recall on the ballot.

“This is a message from 5,500 people that are telling Mr. Lantigua that enough is enough,’’ said the Rev. Edwin Rodriguez, a recall organizer and former leader of a Pentecostal church in the city. “We want a change.’’

According to the city charter, Lawrence officials have 24 hours to verify the names, addresses, and voter registration of those who signed the petition - though City Clerk William Maloney cautioned that the process could take longer.

If the signatures are deemed valid, the city clerk will inform the City Council which, in turn, will notify the mayor. If he does not resign within five days, the council would schedule a recall election in 65 to 90 days.

Maloney said the election, if it occurs, could be part of the November municipal elections at little additional cost. Otherwise, bilingual election coordinator Rafael Tejeda said, a special election could cost $50,000.

Lantigua was at work yesterday, his white truck with the license plate reading “MAYOR’’ parked in his space at City Hall. But he was unavailable for comment and did not respond to requests for interviews.

Lantigua encouraged people not to support the recall effort, fighting it on Facebook with the slogan, “Yo no firmo,’’ or “I won’t sign.’’

The mayor’s supporters say the criticism is unfair because he inherited a massive deficit that forced him to undertake painful cost-cutting measures, such as layoffs.

Moises Fernandez, a Lawrence resident who showed up at City Hall yesterday to oppose the recall, said Lantigua has paved roads and tried to improve the city in the past year and eight months. “For the time he’s spent in office, he’s been doing very well,’’ he added.

He said he doubted that the recall election would move forward and anticipated that after a review, many of the signatures would not be valid.

“I don’t think they have the signatures,’’ he said. “It’s something that isn’t going to happen.’’

Another man, who identified himself as Jose Perez, frowned when asked about the recall.

“It’s shameful,’’ he said, climbing the stairs at City Hall. “They should give people a chance to do their job.’’

Lantigua is a polarizing figure in this struggling city of immigrants, mostly from the Dominican Republic. Many adore the mayor, a charismatic community activist who rose from an impoverished barrio in Santo Domingo to become a state representative and then, in January 2010, the first Latino mayor.

But opponents say Lantigua has mired the city in controversy almost since the day he took office.

After he was inaugurated, Lantigua refused to resign his state representative seat, collecting two government paychecks as a financial crisis engulfed Lawrence. He later resigned as representative, but soon came under federal investigation for allegations of corruption as well as state scrutiny for possible campaign finance violations.

A string of incidents followed, including a public battle with the police over who was responsible for rising crime after Lantigua severely cut the police force; allegations by Lantigua that a driver tried to run him down in front of City Hall - which police said could not be proven; and the revelation that his live-in girlfriend was receiving heating aid for low-income residents even though their household income was much higher than the poverty level.

Yesterday’s recall effort capped weeks of organizing in bodegas and diners and on the sidewalks to collect more than the necessary signatures to formally request a recall election. Organizers said they faced threats and angry confrontations with recall opponents. Last week, a clerk magistrate determined that a 72-year-old city worker, Antonio Bueno, would face criminal charges in Lawrence District Court for allegedly assaulting Rodriguez, a recall organizer, last month.

Edwin Brito, a 44-year-old Lawrence resident who signed the petition, said he wanted Lantigua to step aside so that a new mayor could focus on public safety and other problems.

“He’s got to go,’’ Brito said as he sat on his bicycle outside of City Hall. “I want someone who looks out for the city.’’

Victor Hernandez, a 50-year-old nutrition-company salesman who gathered signatures for the recall, said he wanted a more positive image for Latinos in the city.

He said he and other recall organizers are anxiously awaiting the outcome of the city’s review of their signatures, and hoped all who signed were bona fide voters.

“We trusted that they were telling us the truth,’’ he said.