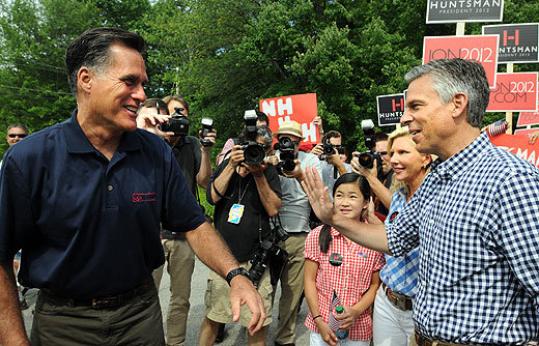 HOLLIS, N.H. - Daniel Anderson was at work operating a complex machine used for cardiac surgery when a man came up to him. “He said how come you don’t believe in technology?’’ Anderson recalled.

Anderson is president of the Concord, N.H., district of The Church of Jesus Christ of Latter-day Saints. That is the Mormon Church, no relation to the Amish - who do not use technology.

Anderson hopes that with two Republican presidential candidates who are Mormons - former Massachusetts governor Mitt Romney and former Utah governor Jon Huntsman - some of the misconceptions about the religion will fade. “It will bring more awareness of our church,’’ Anderson predicted. “Hopefully, positive, and not the stereotyping old myths that seem to get passed around a lot.’’

As the presidential candidates crisscross the first-in-the nation primary state, New Hampshire voters will be faced with a religion of which many voters have little firsthand knowledge. According to the Mormon Church’s website, there are about 8,000 Mormons in New Hampshire - around 0.6 percent of the population. Nationally, the Mormon Church has around 6 million members, about 2 percent of the US population.

While Mormons consider themselves Christians, evangelical Christians cite doctrinal reasons for rejecting Mormonism as a strain of Christianity. Mormon church members interviewed in New Hampshire say they hope having Mormon candidates running will show, ultimately, that Mormons are just like anyone else.

New Hampshire overall is one of the least religious states in the country, and religion tends to play less of a role in politics than it does in the South or Midwest. “People feel people’s religion is their own business,’’ said Michele Dillon, sociology professor at the University of New Hampshire.

None of the Mormon leaders and church members interviewed for this story said they had experienced bias in New Hampshire, and most said New Hampshire is a tolerant and welcoming state.

But church members said they often encounter curiosity and unfamiliarity. Michael Banks, a leader in the Nashua district, said the most common misconception is that Mormons still practice polygamy. “As soon as people find out you’re a Mormon, they say ‘how many wives do you have?’ ’’ Banks said.

The discussion of Romney and Huntsman’s religion irks some Mormons. “When a Republican runs as a Mormon, all of a sudden it becomes an issue,’’ said Karl Hansen, 52, a software engineer from Amherst, N.H., who volunteers for Romney. “To me, it seems like a little of a double standard.’’

Meesa Jeans, 33, a teacher from Nashua, hopes having Romney and Huntsman in the race will prevent either from becoming “the Mormon candidate.’’ “People will realize Mormons are normal people, in the community doing business or politics, not a cult in the middle of the country that does not interact with the rest of the world,’’ Jeans said.

Some Mormon voters say they were drawn to Romney initially because of his faith. Teresa Noel, a school guidance secretary from Hollis, N.H., met Romney when she was living in Cambridge, Mass., and Romney was the leader of her church district. She has volunteered for Romney in both his presidential campaigns and believes he shares her views about the importance of family.

But church leaders are quick to point out that the Mormon Church does not endorse candidates, and Mormons have diverse views. While many Mormons have strong family values, which often leads to an affinity with the many Republicans who oppose abortion and same-sex marriage, Cheryl Potter, 68, a social worker from Hollis, said her faith drove her to volunteer for President Obama in 2008, and she plans to support him again. “The Book of Mormon is pretty clear that we need to help everyone that is struggling in life, and that seems to trend me toward someone like Obama as opposed to someone like George Bush,’’ Potter said.

Ed Lopez, president of Nashua Habitat for Humanity who joined the Mormon Church in college, said he believes Romney and Huntsman’s candidacies make a statement Mormonism has become more mainstream in American culture. “The church has become more acceptable to people,’’ he said. “People realize Latter-day Saints are people who work in the checkout at the supermarket, their neighbor, boss, the person running Jet Blue, or running Marriott Hotels.’’