Law is murky on whether Obama can act on his own 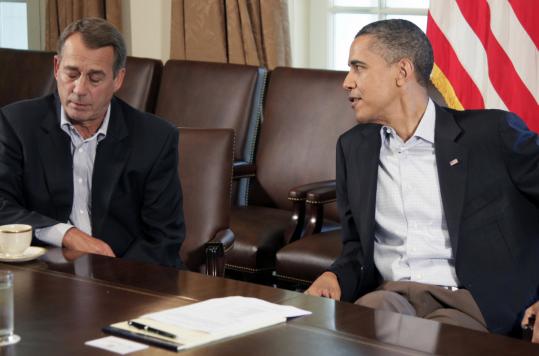 With just days until the nation hits its debt limit, rattling the American economy, President Obama is under mounting pressure from some members of his own party to invoke an obscure Civil War-era constitutional provision that they say would allow him to unilaterally raise the debt limit.

The notion that the president could cite Section 4 of the 14th Amendment to raise the debt ceiling without congressional approval seemed, just days ago, to be an academic debate, mostly among legal scholars. But now, with Congress deeply divided over a resolution, and the deadline alarmingly near, the idea has taken on a new life in the halls of the Capitol.

Steny H. Hoyer and James E. Clyburn, the second- and third-ranking Democrats in the House, and John Larson and Xavier Becerra, the chairman and cochairman of the House Democratic Caucus, have said they would back Obama if he uses the amendment to avoid a default.

Senator John F. Kerry and Bill Clinton, the former president, have also supported the idea, with Clinton saying he would invoke the amendment “without hesitation and force the courts to stop me.’’

Others in the party, however, say the move would be politically and legally disastrous, because it could spark divisive court battles and even impeachment proceedings in the GOP-controlled House. Some legal scholars warn that it would be an abuse of power for the president to wield the provision as a means of raising the debt limit.

Ratified during Reconstruction to ensure that the North could overcome potential Southern opposition to paying down Union war debts, it has never been invoked by a president and has rarely been tested in court.

“We shouldn’t fool ourselves into thinking the 14th Amendment gives him this authority,’’ said Laurence H. Tribe, a Harvard Law School professor and Obama mentor who was until last year a White House adviser. Nothing in the amendment gives the president the power to trample Congress, which has the sole authority to borrow money, he said. “It’s just a fantasy.’’

On the other end of the ideological spectrum, John C. Yoo, a former legal adviser to President George W. Bush, agreed that Obama would be on shaky constitutional ground.

“The president doesn’t have the constitutional authority to unilaterally raise the debt limit, and I’m not a shrinking violet on executive power,’’ said Yoo, whose expansive views of presidential power informed controversial memorandums he wrote authorizing the harsh treatment of terrorism suspects.

“The Framers wanted the president to exercise emergency power in response to national security threats, not over domestic affairs where Congress and the president have had plenty of time to deliberate and figure out a solution,’’ he wrote in an e-mail.

Section 4 of the 14th Amendment states that “the validity of the public debt of the United States, authorized by law . . . shall not be questioned.’’

The idea of dusting it off to prevent a default first surfaced in May when Treasury Secretary Timothy F. Geithner, at a breakfast in Washington, criticized Republicans who have threatened not to raise the debt ceiling.

“I mean really think about it: You’re going to say that? Can I read you the 14th Amendment?’’ he said, pulling from his suit pocket a copy of the Constitution which had the 14th Amendment marked with a paper clip. He then proceeded to read aloud Section 4.

Since then, Obama has shunned the idea but hasn’t directly ruled it out.

“I have talked to my lawyers,’’ he said on July 22, “they are not persuaded that that is a winning argument.’’

Fred F. Fielding, who was White House counsel for presidents Reagan and George W. Bush, also questioned the constitutionality of the move, as well as the purpose it would ultimately serve.

“A unilateral action by a president that’s based on questionable constitutional authority is not likely to calm down the American people or the creditors,’’ he said. And in Congress, he said, “there would be an uproar.’’

Yet the idea has proved alluring to some Democrats, particularly as the deadline to reach a deal in Congress nears, intensifying warnings that the nation’s credit rating could be downgraded and that veterans’ services, Medicaid benefits, and other critical programs could be disrupted.

“If the president deployed this last-resort option to save the economy from default, Kerry would support him,’’ said Whitney Smith, the senator’s spokeswoman. “Senator Kerry believes legal precedent involving the 14th Amendment supports the notion that the president can raise the debt limit to ensure, as it says, ‘the validity of the public debt.’ ’’

“It would be a reasonable thing to do, and a reasonable understanding of the Constitution, and would be upheld in the courts,’’ said Geoffrey R. Stone, a former dean of the University of Chicago Law School. “The Constitution basically says the public debt of the United States cannot be repudiated, and Obama could say that not raising the debt ceiling is a repudiation of the debt and is unconstitutional. He can say, ‘Somebody has to make an adult decision here, in the context of paralysis that was never anticipated, and I’m going to do it.’ ’’

Taking such a step, however, would unleash a political firestorm, many say, and would be out of character for Obama.

“It would be much too divisive, and it’s not Obama’s style to be divisive,’’ said Ross K. Baker, a Rutgers University political scientist. “He has been a conciliator his entire career.’’

“Almost certainly there would be a move to impeach him in the House,’’ Baker added. “No question about that.’’

Representative Michele Bachmann of Minnesota, a Republican presidential candidate, foreshadowed the backlash Obama could expect from the Tea Party.

Representative Barney Frank, a Newton Democrat, said he opposes using the amendment because he fears it will unleash just such a response from the Tea Party movement and spark protests like the ones that erupted two years ago over the national health care law.

“For the president now to do this unilaterally, 150 years after it originated during a period when nobody seemed to think it meant that, would severely exacerbate this sense of distrust and anger,’’ Frank said. “It is an unwarranted gift to the irresponsible elements in the Republican Party.’’