Crossfire, and hints of compromise 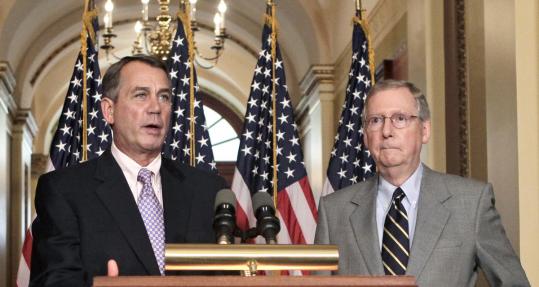 WASHINGTON - Facing an imminent deadline to raise the debt ceiling and avert throwing the nation into an unprecedented default, leaders of the opposing parties appeared to spend more time blasting each other yesterday than on working toward a deal, until late-night negotiations at the White House finally opened up the prospect of a bipartisan compromise.

Senate majority leader Harry Reid, hoarse and wan after a tumultuous week, took the floor in the Senate shortly after 10 p.m. to make the dramatic announcement that he was delaying a vote on a measure he had been pressing - and which Republicans had attacked - to allow time for the White House push to bear fruit.

He offered few hints of the shape of the unfolding deal, except to say he was confident it would raise the debt limit sufficiently to avoid revisiting this sort of stalemate before the 2012 elections. “There is still a distance to go before any arrangement can be completed,’’ he said.

US Treasury officials have said the country will not have enough money after Tuesday to pay all of its bills, including Social Security and veterans’ benefits.

Economists predict markets could turn volatile before then - at tomorrow’s opening bell - without a deal in place. Lucas Papademos, visiting professor of public policy at Harvard’s Kennedy School of Government, said there could be an “abrupt and significant’’ market reaction.

“I would expect it to be considerable,’’ Papademos, also an economist, said yesterday. “Such an event is not expected by a majority of market participants.’’

There seemed to be glimmers of a breakthrough during the day, as Republicans reached out to President Obama to rejoin the talks.

“We are now fully engaged, the speaker and I, with the one person in America, out of 307 million people, who can sign a bill into law,’’ Senate minority leader Mitch McConnell said. “I’m confident and optimistic that we’re going to get an agreement in the very near future and resolve this crisis in the best interests of the American people.’’

But those hopes seemed dashed early yesterday evening as Reid, a Nevada Democrat, again accused Republicans of blocking progress on a deal and not negotiating in good faith.

Reid had started the day with a framework for compromise that would cut $2.2 trillion in spending while raising the debt limit by $2.4 trillion, enough to cover spending into 2013.

But McConnell dealt him a setback almost immediately, presenting him with a letter signed by 43 Republican senators saying they would not sign on to the bill. The measure would need support from at least three of those senators last night to reach the 60-vote margin needed to end an anticipated GOP filibuster and bring it to a vote.

Earlier in the day, Reid pleaded breathlessly for his GOP colleagues to negotiate with him.

“The two parties must work together to forge an agreement,’’ he said.

Four Republican senators did not sign the letter criticizing Reid’s plan and indicated they are open to compromise, including Scott Brown of Massachusetts and Susan Collins and Olympia Snowe of Maine.

A procedural vote on Reid’s compromise measure had been scheduled for 1 a.m. today. But last night, Reid rescheduled the vote for midday today to allow time for a compromise to be crafted. Whatever is voted would still have to win final passage in the Senate and in the House and be signed into law by the president.

Throughout the afternoon, it was clear that there were lines of communication between the White House and Republican leaders. McConnell said that after he spoke to both Obama and Vice President Joe Biden, he felt more confident that a deal could be reached.

But Reid quickly took to the Senate floor to dash such hopes.

“The process has not been moved forward,’’ he said.

In the House, meanwhile, lawmakers took Reid’s compromise framework, put it into a bill and then rejected it, 246 to 173, a preemptive maneuver designed to show they were not on board with the compromise being cobbled together in the Senate.

Shortly afterward, however, House Speaker John Boehner took a somewhat more conciliatory tone, saying that he, too, was involved in negotiations with the White House.

“I think we all know that if the president decides to reach an agreement with us, the Democrats - most of them - will fall in line,’’ said Boehner, Republican of Ohio. “He is the leader of the Democratic Party, he is the president of the United States.’’

As the hours ticked away toward a Tuesday deadline when the government will no longer be able to pay all of its bills, fears about fallout from failing to reach a deal in Congress rippled across the globe to American troops in Afghanistan, who peppered military leaders with questions about whether they will receive paychecks this week. Admiral Mike Mullen, chairman of the Joint Chiefs of Staff, said he didn’t know.

Other countries likely understand that the debt ceiling debate is part of a broader discussion over debt reduction and spending, said Papademos, the Harvard professor. Still, the delay is probably causing confusion over how long it has taken Congress to find a solution.

“Probably market participants and policy makers are both concerned and puzzled that these discussions have lasted so long with no compromise agreement being reached as the US is close to such a crucial point. . . . If there were no agreement, there would be profound consequences for the US economy and global financial markets,’’ he said.

The New York Times cited a Democratic official with knowledge of the talks as saying that McConnell called Vice President Joe Biden early yesterday afternoon, the first conversation between the two men since Wednesday. The official said the two talked at least four more times yesterday as they tried to work out an agreement.

The deal they were discussing, this person said, resembled the bill that Boehner won approval for in the House more than it did the one that Reid had proposed.

It would immediately raise the debt ceiling by about $1 trillion and set up a new bipartisan committee to find deeper cuts in exchange for a second debt limit increase that would extend through the 2012 election.

A failure of the new committee to win enactment of its proposal could then set off automatic spending cuts across the board, including to entitlement programs.

A cloud of unease hung over the Capitol yesterday, as lawmakers and their aides huddled in conference rooms and hallways.

Grim-faced House Democrats filed into a meeting late yesterday morning to discuss their options. Representative Barney Frank, a Newton Democrat, said that House members were discussing what proposals they could accept in a compromise with Republicans. He said he’s willing to accept a deal that has no tax increases as long as it does not cut Medicare or Social Security.

“Our role is to tell [Reid] that if he can get that kind of a deal, we’ll try to sell it on our side, even though there will be aspects to it that people won’t like,’’ he said

Representative Michael E. Capuano, Democrat of Somerville, said he didn’t know how things were going to end, but he knew one thing: “It’s going to be messy and uncomfortable for a lot of people. For everybody - including me.’’

“Everybody knows this has to be done. At some point we’re going to have to get there,’’ he said. “I’m actually surprised that everyone’s surprised at how long it’s taken. This is how it works. I don’t think it’s going to work any differently than it ever does.’’