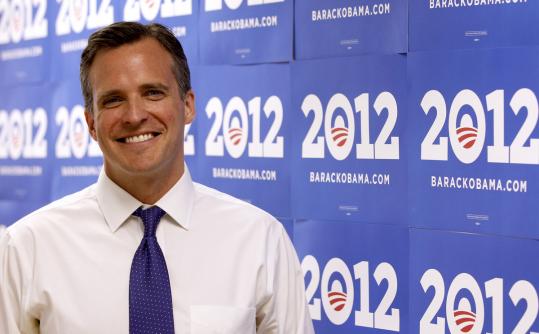 “It sort of freed me from being looked at in the same lens as other people.” said Rufus Gifford, on telling his family he is gay (Jeff Haynes for The Boston Globe)
By Donovan Slack Globe Staff / July 5, 2011

CHICAGO - By his own account, Rufus Gifford’s early life was everything you would expect of the son of a patrician New England banker. Privileged North Shore upbringing. Elite schools. In the summer, tennis on Nantucket.

But things shifted for the third child of Chad Gifford, who ran some of Boston’s biggest financial institutions, after Father’s Day weekend in 1993, when his family discovered he was gay. Rufus Gifford says now that coming out to his parents allowed him to pursue a less traditional path, launching him toward California and ensuring that he would never wear the starched shirts and gray business suits of his father.

Still, money and power have exerted a strong pull on Rufus Gifford’s career.

Just 36 years old, he is working at the center of the Democratic political universe as chief of President Obama’s fund-raising operation for his reelection bid. The post has solidified his status as one of the most prominent openly gay operatives in the country.

After he served as a successful West Coast fund-raiser for Senator John F. Kerry in 2004 and other Democrats in subsequent years, Gifford was dubbed “Obama’s Gay Goldmine’’ by a California publication during Obama’s 2008 bid for the White House.

Now he spends much of his time in a Chicago office tower, home to Obama campaign headquarters. The president’s reelection hinges in substantial part on Gifford’s ability to persuade a big slice of American industry - from Wall Street’s players to Silicon Valley’s entrepreneurs - to pour as much as $1 billion into the coffers for what is expected to be the most expensive campaign in history. Obama set the record in 2008 when he raised $745 million.

“I have not slept through the night in probably two years. There’s the pressure, but also the adrenaline,’’ Gifford said in a recent interview. “I went into this knowing how difficult it would be, that we were being asked to do something that’s never been done before, and for me that’s the most exciting part of this job.’’

Political analysts say Obama might not need as much as $1 billion, given that he is not expected to face a serious primary challenger. But they say setting a high goal is understandable as he attempts to rebuild the grass-roots network of supporters he had in 2008, to reenergize his Democratic base, and to hold on to states he won before, several of which favored Republican candidates in last year’s elections.

“It’s a prudent decision to be very well-resourced for what could be a difficult campaign,’’ said Thomas Mann, a senior fellow at the Brookings Institution who analyzes campaign spending.

And the national finance director for the president’s reelection is Rufus Gifford, whose family epitomizes blue-blood New England. Clarence Gifford, Rufus’s grandfather, was chairman of Rhode Island Hospital Trust. His grandmother hails from one of Rhode Island’s founding families, the Browns.

His father, Charles “Chad’’ Gifford, worked his way up from loan officer to the helm of Bank of Boston by the 1980s. After several transitions, it was acquired by in 2004. He remains chairman emeritus and a board member at Bank of America and holds seats on the boards of , , Partners HealthCare, and Massachusetts General Hospital.

Some members of the Gifford family had notable ties to Democrats.

Rufus’s uncle, the late K. Dun Gifford, was a Senate aide to Edward M. Kennedy in the 1960s and was at the side of Robert F. Kennedy when he was gunned down in Los Angeles in 1968.

Rufus Gifford went to boarding school at St. Paul’s School in Concord, N.H., where he was an actor, playing Pippin in the musical of that name. He graduated from Brown University with a double major, in American civilization and theater.

It was after his freshman year at Brown, in 1993, that his mother was visiting him in Hollywood, where he was on a summer internship. She picked up one of his notebooks, while he was away at work, to leave him a note.

“I turned to the back page, and it said, ‘I wish the world knew what it was like to be gay,’ ’’ Anne Gifford recalled. “Whoa. My world. It rocked my world.’’

She spoke to her son that night and over the next several days, and told her husband when she returned to Massachusetts that Sunday.

“Chad picked up the phone and said, ‘Hey Ruf, mom just got back and told me that you’re gay and this doesn’t change anything. I love you,’ ’’ she said. “And then, as Chad always does, he throws humor in: He said, ‘Do you have any other Father’s Day presents for me?’ ’’

Nonetheless, Chad Gifford traveled to California the following week and tried to convince Rufus that he wasn’t gay.

“It’s not a life you would choose for your child, especially back when he came out,’’ Anne Gifford said. “It was such uncharted territory for us.’’

Together, his parents wrote an op-ed article in the Globe in 2004 urging Massachusetts residents not to overturn gay marriage, which had been legalized a year earlier.

Rufus said his coming out was not unlike the experiences of other gay young people - “outrageously difficult’’ and “one of the most lonely feelings in the entire world.’’

He had no gay role models. His parents had no openly gay friends. But for him, being gay also provided an “enormous opportunity.’’

“It sort of freed me from being looked at in the same lens as other people,’’ he said. “And so I could sort of free myself from being a banker’s son in Boston, and I could go do something different.’’

Rufus Gifford returned to Hollywood. He found work as a creative executive affiliated with 20th Century Fox, where he acted as a liaison between the studio and the creative types - the writers, director, and actors - in an effort to improve their movies.

Some of his films were commercial successes, but many were panned by critics. He worked on “Dr. Doolittle 2’’ with Eddie Murphy, “First Daughter’’ with Katie Holmes, and “Life or Something Like It’’ with Angelina Jolie.

By 2004, he wanted out - he had become creatively frustrated.

“I moved to LA with these pie-in-the-sky ambitions that I could help create some of this fantastic product, these amazing movies,’’ he said. “And what I found when I got there is it’s not like that.’’

He had dabbled in political fund-raising. His classmate at Brown was Kerry’s daughter, Alexandra, and he helped out Kerry’s primary campaign for president in 2003 on what he described as a “very, very low level.’’

“Having consulted with my dad several times, I said, look, I don’t want to do this anymore, and I’m so fed up with the Bush administration that I just want to devote all my time and energy to getting John Kerry elected as president of the United States,’’ he said.

He soon became one of Kerry’s most prolific fund-raisers. As deputy finance director for the western region, he helped oversee the raising of more than $30 million.

“He became an instant legend. He was a pied piper on our campaign,’’ Kerry said.

In 2007, Gifford and his romantic partner at the time (Jeremy Bernard, who this year became the first openly gay White House social secretary) signed on to Obama’s campaign, and together, they helped raise nearly $80 million from California for the then-underdog senator’s presidential campaign. It was the largest amount from any state for Obama.

One of the key reasons Gifford signed on with Obama was the candidate’s stand on gay and lesbian issues, including his pledges to repeal the “don’t ask, don’t tell’’ ban on gays serving openly in the military and to establish protections from workplace discrimination.

Obama signed the don’t ask, don’t tell repeal earlier this year and announced his administration would no longer defend in court the Defense of Marriage Act, which prohibits federal recognition of same-sex marriages. But the president has not expressed support for gay marriage, angering some in the gay community. Obama was heckled at a gay fund-raiser in New York last month when he said he supports equal rights for gays but didn’t address same-sex marriage.

“He is the best and most progressive president we’ve ever had on gay rights,’’ he said.

Gifford now spends most of his days traveling and on the phone or online building a national network of staff and campaign contributors. Versions of his pitch popped into his interview with the Globe.

“The last two years were two of the most productive years in American history; more was accomplished during the last two years, I would argue, than certainly any presidency in my lifetime,’’ he said. “And if you imagine what we did in two years, think about what we can do with four more years.’’

Transforming that message into record amounts of dollars is the challenge.

“There’s no question that he has an enormous job cut out for him - I don’t envy him,’’ said David Mixner, a leading Democratic, openly gay fund-raiser. “He’s had, he has to do some rebuilding among different groups. It’s not an easy task. It wasn’t that long ago in the 1990s that raising $30 to $40 million was spectacular.’’