Governor was able to corral unlikely assembly of forces 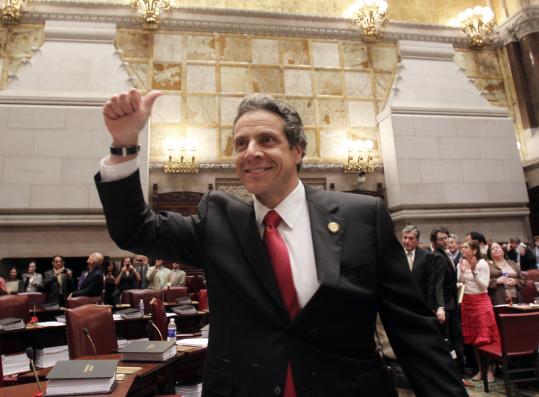 NEW YORK — In the 35th-floor conference room of a Manhattan high-rise, two of Governor Andrew M. Cuomo’s most trusted advisers held a secret meeting a few weeks ago with a group of super-rich Republican donors.

Over tuna and turkey sandwiches, the advisers explained that New York’s Democratic governor was determined to legalize same-sex marriage and would deliver every possible Senate vote from his own party.

Would the donors win over the deciding Senate Republicans? It sounded improbable: top Republican moneymen helping a Democratic rival with one of his biggest legislative goals.

But the donors in the room — the billionaire Paul Singer, whose son is gay, joined by the hedge fund managers Cliff Asness and Dan Loeb — had the influence and the money to insulate nervous senators from conservative backlash if they supported the marriage measure. And they were inclined to see the issue as one of personal freedom, consistent with their more libertarian views.

Within days, the wealthy Republicans sent back word: They were on board. Each of them cut six-figure checks to the lobbying campaign that eventually totaled more than $1 million.

Steve Cohen, the number two in Cuomo’s office and a participant in the meeting, began to see a path to victory, telling a colleague, “This might actually happen.’’

The same-sex marriage law, which was signed by Cuomo just before midnight Friday, will go into effect in 30 days, meaning that gay couples can marry here beginning July 24. Gay couples from out of state will also be allowed to apply for wedding licenses and hold nuptials in New York.

Roughly 45,000 gay couples live in New York State, according to census estimates. Officials across the state are readying for thousands to get married, especially in the first week.

Four Republican senators joined all but one Democrat in supporting the measure, which passed by a vote of 33 to 29.

The story of how same-sex marriage became legal in New York is about shifting public sentiment and individual lawmakers moved by emotional appeals from gay couples.

But, behind the scenes, it was really about a Republican Party reckoning with a profoundly changing power dynamic, where Wall Street donors and gay-rights advocates demonstrated more might and muscle than a Roman Catholic hierarchy and an ineffective opposition.

And it was about a Democratic governor, himself a Catholic, who used the force of his personality and relentlessly strategic mind to persuade conflicted lawmakers to take a historic leap.

Over the past several weeks, dozens of lawmakers, strategists, and advocates described the closed-door meetings and tactical decisions that led to approval of same-sex marriage in New York, about two years after it was rejected by the Legislature. This account is based on those interviews, most of which were granted on the condition of anonymity to describe conversations that were intended to be confidential.

Cuomo was diplomatic but candid with gay-rights advocates in early March when he summoned them to the Capitol.

The advocates had contributed to the defeat of same-sex marriage in 2009, he told them, with their rampant infighting and disorganization. This time around, the lobbying had to be done the Cuomo way: with meticulous, top-down coordination. “I will be personally involved,’’ he said.

The gay-rights advocates agreed, or at least acquiesced. Five groups merged, hired a prominent lobbying firm with ties to Cuomo’s office, and gave themselves a new name: New Yorkers United for Marriage.

Cuomo’s approach was a turning point not just for the marriage movement, but also for his long and fraught relationship with the gay community. Advocates groused that he had waited until 2006 to endorse same-sex marriage, years after many leading New York political leaders.

Over time, however, championing same-sex marriage had become personal for Cuomo. He campaigned on the issue in the race for governor last year, and after his election, he was staggered by the number of gay couples who sought him out at restaurants and on the street, prodding him, sometimes tearfully, to deliver on his word.

During his first few months in office, Cuomo had achieved what seemed like modern-day miracles by the standards of Albany — an austere on-time budget and a deal to cap property taxes. But, as Cuomo explained by phone to his father a few weeks ago, he did not want those accomplishments to define his first year in office.

“They are operational,’’ he told his father. Passing same-sex marriage, by contrast, “is at the heart of leadership and progressive government.’’

In early June, a pollster laid out the results of his research on same-sex marriage for Senate Republicans.

There was little political rationale for legalizing it, the numbers suggested: statewide support did not extend deeply into the rural, upstate districts that are crucial to the state’s Republican Party.

But the caucus was far from unified. And crucially for same-sex marriage advocates, the Republicans’ relatively untested leader showed no interest in forcing them to reach a consensus.