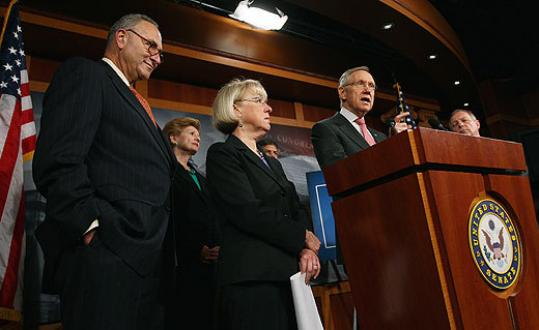 WASHINGTON — The Democrats’ leading environmental messenger, Al Gore, is declaring that President Obama has failed to lead on the issue of global warming.

In a 7,000-word essay posted online yesterday by Rolling Stone magazine, Gore said the president hasn’t stood up for “bold action’’ on the problem and has done little to move the country forward since he replaced Republican George W. Bush.

Bush infuriated environmentalists by resisting mandatory controls on the pollution blamed for climate change, despite overwhelming scientific evidence that the burning of fossil fuels is at least partly responsible. The scientific case has only gotten stronger since, Gore argues, but Obama has not used it to force significant change.

“Obama has never presented to the American people the magnitude of the climate crisis,’’ Gore said. “He has not defended the science against the ongoing withering and dishonest attacks. Nor has he provided a presidential venue for the scientific community . . . to bring the reality of the science before the public.’’

Gore did credit Obama’s political appointees with making hundreds of changes that have helped move the country “forward slightly’’ on the issue.

He is the second Clinton administration official this month to express disappointment with Obama on environmental issues. Former interior secretary Bruce Babbitt said Obama had yet to take up the “mantle of land and water conservation . in a significant way.’’

Gore’s comments mark a turnaround for the nation’s most prominent global warming advocate. Gore toasted Obama’s inauguration with a “green’’ ball. He helped the White House press the House to pass a global warming bill in 2009 that would have set the first-ever limits on the pollution blamed for global warming, a bill that died in the Democratic-controlled Senate. Gore also advised Obama before the president participated in international climate negotiations in 2009. Obama’s last-minute appearance in Copenhagen helped salvage a nonbinding deal to reduce greenhouse gases.

“His election was accompanied by intense hope that many things in need of change would change,’’ Gore wrote. “Some things have, but others have not. Climate policy, unfortunately, falls into the second category.’’

Bill by Frank, Paul allows marijuana legalization
WASHINGTON — Representatives Ron Paul, a Texas Republican who is seeking his party’s presidential nomination, and Barney Frank, a Massachusetts Democrat, are expected to introduce legislation today that would allow states to legalize marijuana.

The measure would let states regulate, tax, and control marijuana without federal interference, according to the National Organization for the Reform of Marijuana Laws.

“The legislation would limit the federal government’s role in marijuana enforcement to cross-border or inter-state smuggling, allowing people to legally grow, use or sell marijuana in states where it is legal,’’ the statement said.

Paul, who serves with Frank on the House Financial Services Committee, has long favored legalizing drugs as part of his libertarian message of limited government. A spokeswoman for his office was not immediately available for comment. — BLOOMBERG NEWS

Bachmann will be off to slow start in Iowa
DES MOINES — When Michele Bachmann formally kicks off her bid for the White House on Monday in Iowa, she will do so after allowing precious weeks to pass without having established the presence needed in the state to woo the GOP activists considered key to winning its leadoff caucuses.

Bachmann’s slow start has left political players in the state wondering if the Republican congresswoman from Minnesota has the commitment to build the kind of grass-roots campaign and work to win voters in face-to-face meetings that have led past winners of the Iowa caucuses to success.

Her absence also has allowed Texas Governor Rick Perry, whose no-nonsense style attracts social conservatives who might support Bachmann, to creep into the Iowa discussion and begin to set up a campaign infrastructure in the event he gets in.

Securing a foothold in Iowa is important for Bachmann. She is a native of the state, having grown up in Waterloo, and a neighbor, having moved to Minnesota at age 12. Her popularity among Christian conservatives and Tea Party activists also make her a natural fit for the caucus electorate.

A strong finish in Iowa for the three-term congresswoman also could launch her as the key challenger to establishment Republicans, most notably former Massachusetts governor Mitt Romney.

Winning the Iowa caucuses traditionally requires a candidate to personally court the activists and party diehards who will attend the precinct-level political meetings on caucus night and literally stand up for their candidate.

Some county-level Republican leaders said they have seen little evidence of outreach by Bachmann at a time when other candidates have dispatched staff to their monthly meetings. — ASSOCIATED PRESS