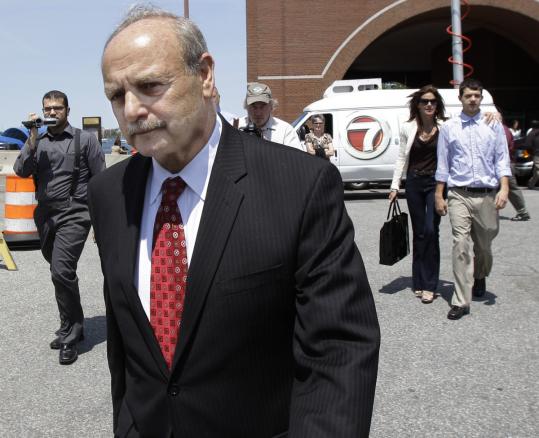 But legal wrangling in the high-profile case is far from over, as lawyers for DiMasi and associate Richard McDonough pin their appeal in large part on an argument they made during the trial: Prosecutors never proved what they legally must, that DiMasi declared he would support the company, , in exchange for secret payments. Only if DiMasi himself made that connection overt would his unseemly dealings amount to a crime, his lawyer said.

“Our position was they never proved that, and that will be a big part of the appeal,’’ Thomas Kiley, a lawyer for DiMasi, said in an interview.

Thomas Drechsler, a lawyer for McDonough, said of the continued legal wrangling: “It’s part of the process, but the process is not over.’’

Their argument on appeal is based on a 2010 Supreme Court decision, in a case involving former Enron chief executive Jeffrey Skilling, that found prosecutors must prove an “intended bribe’’ in a case alleging a failure to provide “honest services.’’

Before that ruling, a mere failure to disclose a conflict of interest could have constituted a crime. But no longer, DiMasi’s lawyers say. And they argue that while DiMasi may have failed to disclose payments he received from Cognos, he never agreed to support the company in exchange for money.

“That’s something that may not be politically pretty, but it’s not necessarily consistent with quid pro quo, which alone is subject to criminal prosecution when it’s done by a public official,’’ said Martin Weinberg, an attorney for DiMasi codefendant Richard Vitale.

Vitale was acquitted of the eight charges he faced, based on Weinberg’s arguments that there was no proof he agreed to a kickback scheme.

Legal analysts, however, argue that the Supreme Court ruling, decided after DiMasi was indicted, should have no influence on the convictions of DiMasi and McDonough and that prosecutors did indeed show that the former speaker exploited his office for personal gain. They point to the jury’s unanimous verdict.

“You can’t get money for official acts, and I think [the Supreme Court decision] has left that untouched,’’ said Steve Huggard, former chief of the public corruption unit in the US attorney’s office. “It’s a very difficult argument for the defense to make.’’

Gregory E. Tomczak, a New Jersey lawyer who specializes in white-collar crime, said: “I think it’s pretty clear as long as there is some type of payment that benefits the person accused, that’s enough.’’

Lawyers and legal analysts agree that the testimony of Steven Topazio, a former DiMasi law associate, played a central role in the jury’s findings that there was indeed an agreement for a bribe.

Topazio told jurors that McDonough and former Cognos salesman Joseph Lally put him on the company’s payroll and paid him a regular retainer, though he was never asked to do any work. Lally testified he paid DiMasi referral fees totaling $65,000.

Defense lawyers argued Lally was a fraud who shaped his testimony for prosecutors.

Legal analysts and lawyers in the case say the jury’s decision to acquit Vitale of all charges and to acquit McDonough and DiMasi on two counts related to Lally’s testimony, shows that the defense succeeding in discrediting Lally.

Based on the convictions, however, the jurors seemed to believe the other 23 witnesses, ranging from Governor Deval Patrick and his top aides to Topazio, the original key witness, according to legal analysts.

Huggard said: “I think it had a lot to do with Topazio. Topazio’s saying I’m getting paid for work I’m not doing, and it has to do with the Cognos contract.’’

The analysts agree that the defense lawyers are treading new ground as they argue that prosecutors failed to show enough proof to meet standards set by the new Supreme Court ruling. DiMasi’s case is one of the first to go through a complete trial since the ruling.

US District Court Chief Judge Mark Wolf, who handled the DiMasi case, said the Supreme Court may have to clarify what the standard should be, once current cases make their way through the appellate courts.

“These are very cutting-edge issues that are legally challenging and factually challenging for lawyers, prosecutors, and the courts,’’ Weinberg said. “Everyone struggled with intensity to get it right, but the reality is we’re in uncharted waters.’’

Lawyers and prosecutors argued so heatedly over what the standard of proof should be that they spent an extraordinary amount of time clashing over jury instructions on how to interpret this key element of the law.

Prosecutors scored a significant victory when Wolf told jurors in the instructions that they did not need to find that DiMasi received a specific payment for a specific act to convict him, only that they find he participated in a scheme to receive payments and support Cognos “as opportunities arose or when DiMasi was called upon to do so.’’

Legal analysts say Wolf may consider the defense’s chances in an appeal when deciding whether DiMasi’s sentence should be stayed pending the course of an appeal. Sentencing is scheduled for Sept. 8.

Wolf has asked lawyers and prosecutors to prepare arguments for sentencing, and the judge has indicated he may consider evidence against Vitale in weighing the entire scheme by DiMasi and McDonough.

Wolf also has asked prosecutors to put a total dollar value on the kickback scheme.

Based on the jury’s acquittal of Vitale, the panel only considered the $65,000 payments from Topazio. But Wolf said in court filings that prosecutors may argue that DiMasi cost taxpayers more, by refusing to trim a $4.5 million contract and forcing a $13 million contract on the state.