Pressure mounts on Weiner to resign 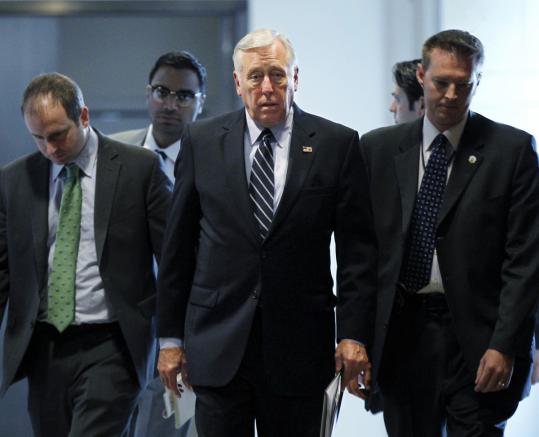 WASHINGTON — President Obama, increasing pressure on Representative Anthony Weiner to quit, said yesterday that “I can tell you that, if it was me, I would resign.’’

“I think he’s embarrassed himself. He’s acknowledged that,’’ the president said in an interview to air this morning. “He’s embarrassed his wife and his family. Ultimately, there’s gonna be a decision for him and his constituents. I can tell you that, if it was me, I would resign.’’

Last night, the House approved without objection a two-week leave of absence for Weiner. His request was approved by unanimous consent at the close of legislative business.

In his interview, Obama said public service “is exactly that, it’s a service to the public. And when you get to the point where, because of various personal distractions, you can’t serve as effectively as you need to at the time when people are worrying about jobs, and their mortgages, and paying the bills, then you should probably step back.’’

House minority leader Nancy Pelosi has called for Weiner to quit, as have several other Democrats including party chairwoman Debbie Wasserman Schultz.

The House Ethics Committee began a preliminary inquiry that could bloom into a full investigation if Weiner, a New York Democrat, ignores calls to resign.

House officials said the ethics inquiry is not yet extensive, and committee leaders have not indicated whether they will order a more intensive staff investigation.

If Weiner did resign, the committee would no longer have jurisdiction to investigate him. If he remained in Congress, Ethics Committee Chairman Jo Bonner of Alabama and ranking Democrat Linda Sanchez of California could name a four-member subcommittee to conduct a more thorough investigation. That could lead to an ethics trial.

The Ethics Committee is not designed as a quick-reaction force when a scandal erupts. An investigation could last months, even longer, if the case became legally complicated and Weiner decided to mount a full defense.

Congress returned to work yesterday as Weiner began his temporary leave from the House while seeking treatment for an undisclosed disorder at an undisclosed location.

House members can ask officials for leaves of absence, which are routinely granted.