THIS STORY HAS BEEN FORMATTED FOR EASY PRINTING
Joanna Weiss 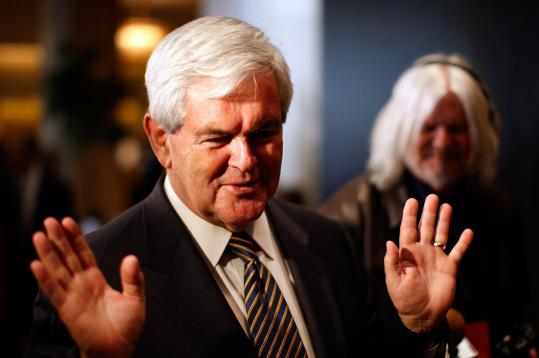 I REMEMBER the moment I realized how hard it is to run for president. It was 2004, and I was watching Wesley Clark, Democratic candidate and retired four-star general, bagging groceries at Sully’s Superette in Goffstown, N.H.

To his credit, Clark was cheerful — outwardly, at least. He knew what he had gotten into. Still, I felt for him, a guy who had commanded NATO forces, traveled through Europe as a VIP, and now was asking strangers if they wanted paper or plastic.

That means I should probably feel sympathy for Newt Gingrich, whose staff’s mass exodus last week apparently hinged on the pesky matter of a retail campaign. Ex-Gingrich aides told reporters that their candidate didn’t seem committed to slogging on the ground in Iowa and New Hampshire. He wanted to rely on social media and events like last night’s CNN debate. And really, who wouldn’t rather cruise the Greek isles than shake hands with the 367th person at a barbecue in Sioux City?

Only someone who really wants to be president.

Retail politicking is a longtime campaign staple; surely, the ancient Romans kissed babies en route to the Senate. But there’s a particular quality, a special indignity, to campaigns in the early primary states. We’re not just talking about shaking hands near Fenway Park in the cold. We’re talking long conversations, back and forth, with voters who are engaged, entitled, sometimes drunk with power. You have to face angry questioners and single-issue stalwarts. You have to stay in the room until every question has been asked. You have to beg.

“That’s one of the rudest shocks to presidential candidates,’’ said Dante Scala, a political science professor at the University of New Hampshire. “They’re not used to working in an environment in which either people don’t know who they are or, if they do, they’re not fully impressed.’’

Gingrich, Scala said, is a case in point. He hasn’t run for competitive office in more than a decade. He’s been busy working at think tanks, speaking to friendly conservative groups, and making documentaries about Ronald Reagan. Scala said Gingrich reminds him of Rudy Giuliani, who barely visited New Hampshire in 2008, convinced that his aura would carry him through.

But in the VFW halls of Manchester, it’s too smoky to see your aura. “New Hampshire tends to reward pluggers, folks who at first glance don’t have all the glamour attached to them,’’ Scala said.

Governors, who tend to stay closer to the people, often fare better than long-time members of Congress, Scala said. But really, it comes down to work. Jimmy Carter, Paul Tsongas, Bill Clinton in 1992, John Kerry in 2004 — all gained mileage by appearing before small groups and large ones, again and again, even when it looked like they were going to lose.

There are practical benefits to talking so often and listening so much, Scala notes. It’s a good way to understand what the public truly cares about.

But retail politicking isn’t necessarily a test of how someone would fare as president. It’s more a test of commitment: How to tell who truly wants the world’s hardest job, and who wants an easy ride or a platform for pitching side ventures. It’s hard to imagine Donald Trump making the rounds of New Hampshire women’s groups. Gingrich, Scala notes, has been similarly scarce. A rare visit to New Hampshire last week was built around screening a documentary he and his wife made . . . about the pope.

It’s likely no match for the nitty-gritty of a long campaign, with its exhaustion, boredom, constant threat of germs and humiliation. And that’s a good thing for democracy. Politicians, once in office, spend plenty of time getting treated like stars. It’s useful to know that they also have to spend time kowtowing to regular people.

And in this post-Citizens United era, when money is more important than ever, the people of Iowa and New Hampshire are more important, too. They’re proxies for the rest of us, reminders that the people still get the final say.

So talk all you want, Newt. Tweet away. Then get your boots on the ground and start bagging.