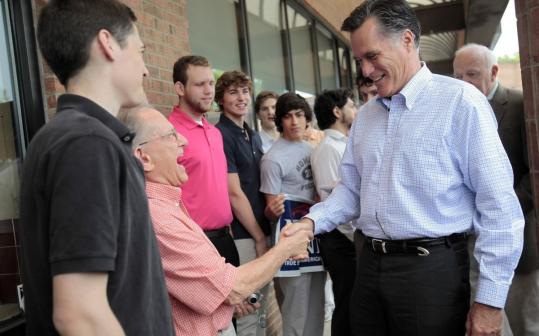 About 75 demonstrators turned up in the Detroit suburb of Livonia and greeted the former Massachusetts governor with angry chants as he entered a diner to shake hands with voters. One man engaged in a heated argument with Romney, and Romney approached the man to debate, pausing in between signing autographs and posing for snapshots.

“You were wrong! You were wrong!’’ said the man, David Holtz, 61, executive director of Progress Michigan, a left-leaning communications firm in Lansing.

In November 2008, Romney publicly opposed a request by auto executives for billions in government loans to ease a recession-driven crisis. Romney preferred a structured bankruptcy for automobile manufacturers, the mainstay of Michigan’s economy, saying the carmakers needed a transformation, not a handout.

Responding to Holtz outside the diner yesterday, Romney said: “I know there are some people who believe in bailouts. I believe in following the process of the law, which is bankruptcy.’’

Later, at a press conference in Detroit, Romney faced pointed questions about the bailout in a sometimes testy exchange with reporters.

“You get to ask the questions you like, I get to give the answers I like,’’ he said to a television reporter. He continued trying to differentiate between his opposition to lending the industry government money and his support for a managed bankruptcy.

George W. Bush extended $17 billion in emergency loans to automakers in December 2008 as his presidency was drawing to a close. President Obama in early 2009 steered tens of billions more to General Motors and Chrysler, expanding the bailouts as the two giants headed for government-supported bankruptcies. More than $40 billion out of $80 billion in total loans to the industry remain outstanding, and about $14 billion in taxpayer money may never be recovered, according to the White House, far less than first expected.

Now Obama is taking credit for successfully managing the crisis, a narrative that is creating a challenge for Romney on the campaign trail. The former Massachusetts governor, whose father, George, ran American Motors before he served as Michigan’s governor, outlined his position against auto bailouts in a New York Times opinion column in November 2008 with the headline, “Let Detroit go Bankrupt.’’

“I laid out a plan to get America’s industry on its feet again, and that’s happened,’’ Romney said yesterday. “I said go through bankruptcy reorganization, and that’s in part what got the industry back on its feet. Don’t forget it.’’

“My background is in this state,’’ said Romney, who was driven around during his trip in a black Chrysler 300. “I love the auto industry, I love American cars.’’

The candidate did not directly answer a question about whether GM and Chrysler would have rebounded, had it not been for the federal infusion of funds that Romney opposed. He also declined to say whether auto executives should take a pay cut, although he said executives asking employees to sacrifice should do the same.

“When executives feather their nests, and when employees are being laid off or having really difficult times, that’s a real challenge for that enterprise and the executives ought to rethink their own plans,’’ he said.

Michigan is likely to be a critical battleground, not only in the Republican primary but in the general election. When asked whether he had any chance of wooing Democrats in a general election campaign here, given his position on the auto bailout, Romney was optimistic.

“Any Democrat who understands my stance on the auto industry will say, ‘Boy he was right on,’ ’’ he said.

Romney also continued to focus his attention on Obama’s handling of the economy, trying to make the case that he would be a better steward.

“The economy overall has been terribly managed by the president,’’ Romney said in Detroit, after touring Bizdom U, which helps coach aspiring entrepreneurs. “I don’t think there’s any way he can defend his economic record.’’

Romney started his day at the Senate Coney Island Restaurant, paying in cash and ordering up potatoes, multigrain toast, and eggs.

He worked the room, signing baseball gloves, photographs, and baseballs.

Romney also sat for several minutes with Helen Hall, a 77-year-old retired woman who presented Romney with an invitation she received in 1965 to have tea with Romney’s mother, who was the state’s first lady at the time. For the tea, an 18-year-old Mitt Romney parked the woman’s Buick, she said.