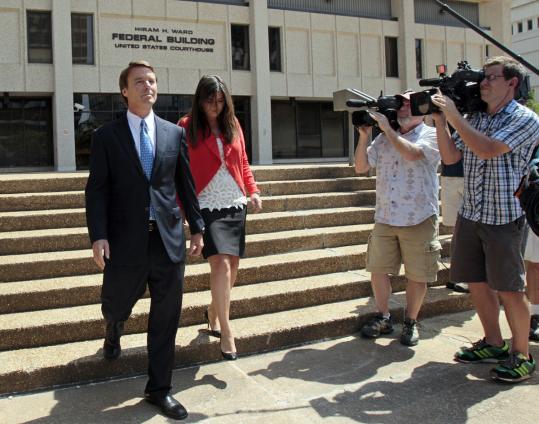 John Edwards insists that he did not break the law. He left a Winston-Salem, N.C., courthouse Friday with his daughter Cate. One observer says the case may be tossed before it goes to trial. (Gerry Broome/ Associated Press)
By Mike Baker and Nedra Pickler Associated Press / June 5, 2011

RALEIGH, N.C. — Two crucial witnesses are dead. Another is 100 years old. A fourth was recently held in contempt of court.

The daring indictment of two-time presidential candidate John Edwards has pitfalls at every turn for federal prosecutors, adding strain to a Justice Department section still trying to recover after botching its last major political case.

Government attorneys are relying on an untested legal theory to argue that money used to tangentially help a candidate — in this case, by keeping Edwards’s pregnant mistress private during his 2008 presidential run — should have been considered a campaign contribution. Edwards’s lawyers counter with an argument that’s reprehensible but could raise reasonable doubts with a jury: He was only interested in hiding the affair from his cancer-stricken wife, who died in December.

The six-count indictment accuses Edwards of conspiracy, taking illegal campaign contributions, and making false statements. On Friday, appearing both defiant and contrite, he insisted he did not break the law.

Some legal specialists tend to agree.

At Citizens for Responsibility and Ethics in Washington, which typically criticizes the Justice Department for not pursuing enough cases against public officials, executive director Melanie Sloan questioned why federal officials were spending resources on this one. She said it is unlikely prosecutors can prove that participants of the scheme intended for the money to aid Edwards’s candidacy, and Sloan said it was a stretch to argue that private plane flights provided to mistress Rielle Hunter should somehow be considered campaign contributions.

“This is a really broad definition of campaign contribution,’’ said Sloan, a former federal prosecutor. She predicted a judge will toss the case before it goes to trial.

Prosecutors contend that the money was intended to aid Edwards’s campaign by preventing public disclosure of the affair, which would have destroyed his candidacy. But prosecutors could have difficulty proving intent, given that Baron died in 2008 shortly after the scandal surfaced and Mellon is now 100 years old.

Andrew Young, a former Edwards aide who initially claimed paternity of Hunter’s baby and helped keep her in hiding, probably will be a key government witness. Edwards’s lawyers have already tried to portray him as being motivated by financial gain.

Hunter sued Young around the time he was releasing a tell-all book, and her attorneys questioned his credibility. A North Carolina judge said he was troubled by seemingly conflicting statements Young made under oath in the lawsuit involving a purported sex tape depicting Edwards. Superior Court Judge Abraham Penn Jones held Young in contempt and considered sending him to jail before backing away as Young’s lawyers argued that the discrepancies were memory lapses.

Young has said he found the sex tape among trash left behind at a home he was renting for Hunter, and he said he held on to the tape to corroborate his story. And if it weren’t for Young’s book, the plot to conceal Hunter may never have been exposed.

Prosecutors did cite some evidence in their indictment that could be used to argue that participants of the conspiracy knew the money was going to aid Edwards’s candidacy. A note from Mellon in 2007 indicated that she wanted to help pay Edwards’s bills “without government restrictions.’’

White-collar attorney Matt Miner said although the four counts of receiving illegal campaign contributions may be novel applications of the law, the false statement and conspiracy charges are more straightforward and could be the most problematic for Edwards.

“If Edwards can be shown to have conspired to receive contributions in a way that he would not otherwise have to report — and then those false reports were filed under his signature — both charges are fairly straightforward conspiracy and false statement charges,’’ Miner said.

In August 2008, Edwards admitted to the affair. But he denied fathering Hunter’s child until the beginning of last year.