Allegedly used funds for coverup; trial is likely to recall details of his affair 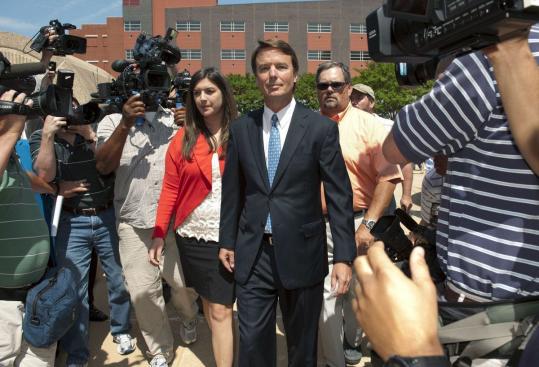 NEW YORK — John Edwards, the former Democratic senator from North Carolina and nominee for vice president in 2004, was once one of his party’s most promising stars. But yesterday, he found himself in a stunning fall from grace: in a courtroom in North Carolina, being read his rights.

Earlier in the day, a federal grand jury indicted him on charges that he violated federal campaign finance laws by “secretly obtaining and using’’ contributions from wealthy benefactors to conceal his mistress and their baby while he was running for president in 2008.

He pleaded not guilty and set the stage for a trial that will probably to dredge up embarrassing details of his affair and his betrayal of his wife and those who believed in his campaign. But Edwards, a skilled trial lawyer, had rejected a chance to avoid a trial through a plea bargain, opting to take his chances in front of a jury.

“I will regret for the rest of my life the pain and the harm that I’ve caused to others,’’ he told reporters outside the courthouse in Winston-Salem after the proceedings. “But I did not break the law. And I never, ever thought that I was breaking the law.’’

The trial was scheduled to begin July 11 in Winston-Salem, but lawyers involved said they expected it would start much later.

Earlier in the day, a grand jury, which had been investigating the case for two years, indicted Edwards on six counts — one involving conspiracy, four involving illegal payments and one involving false statements. If he is found guilty, Edwards, 57, faces a maximum penalty of 30 years in prison and $1.5 million in fines.

Their older daughter, Cate, a lawyer, accompanied Edwards to court.

The indictment contends that Edwards and his co-conspirators solicited $725,000 from Rachel Mellon, the now 100-year-old heiress to the Mellon banking fortune, and $200,000 from Fred Baron, Edwards’s campaign finance chairman.

The money, the indictment said, was used to cover up his affair with Rielle Hunter, his mistress, with whom he had a child, and to pay for her prenatal medical expenses, travel, and accommodations.

The fact that Edwards tried to cover up his affair is not at issue. The Justice Department says that those contributions from two wealthy patrons were campaign donations and therefore subject to federal campaign finance laws that set limits on the amounts that can be donated and received, and require public reporting. Those two donations were well in excess of the $2,300 limit on individuals.

The indictment says the money was actually used for campaign purposes: If the public knew that he was having an affair, his campaign would have been over. (It was over anyway, before he confessed to the affair in August 2008, having lost too many primaries to political Barack Obama and Hillary Rodham Clinton, but it might have imploded even earlier or never even gotten off the ground.)

“Mr. Edwards is alleged to have accepted more than $900,000 in an effort to conceal from the public facts that he believed would harm his candidacy,’’ Assistant Attorney General Lanny A. Breuer said in a statement. “As this indictment shows, we will not permit candidates for high office to abuse their special ability to access the coffers of their political supporters to circumvent our election laws.’’

The Edwards defense is that the money was used not for political reasons but for personal reasons: He wanted to conceal the affair from his wife.

The indictment included the transcript of a note that Mellon sent to Andrew Young, a former aide to Edwards, in May 2007 — about the time that Edwards and Young were looking for ways to raise money to conceal the affair.

Mellon said she had been “sitting alone in a grim mood — furious that the press attacked Senator Edwards on the price of a haircut. But it inspired me — from now on, all haircuts, etc., that are necessary and important for his campaign — please send the bills to me. . . . It is a way to help our friend without government restrictions.’’

The money from Edwards’s patrons, which was delivered through checks made out to a third party — one check was stashed in a box of chocolates — paid for Hunter to live in various hotels and in gated communities in North Carolina and California. She was often in the company of Young, who claimed paternity of the child to protect Edwards.

While some legal experts questioned the validity of the government’s case, saying it was applying an overly broad definition of campaign contributions, others say it is important that candidates take campaign finance law seriously.