Controversial decision may pay off politically 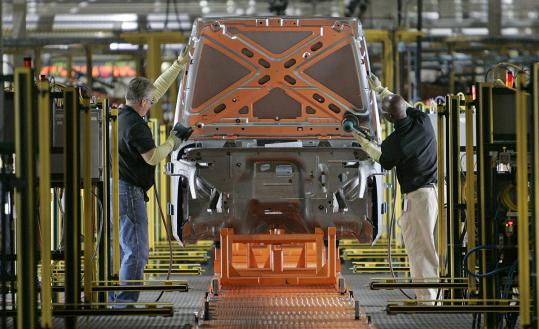 WASHINGTON — Having come to the rescue of the American auto industry, President Obama is looking to collect a political advantage from a big risk that paid off.

In early 2009, when the new president steered billions in tax dollars to General Motors and Chrysler, 72 percent of Americans opposed more emergency loans to the Detroit auto giants. Obama’s decision to defy public opinion and expand the bailouts begun under President Bush was seen by pundits as a potential threat to his reelection.

Two years later, General Motors Co. is making money again and adding jobs. Chrysler Group announced last week that it was repaying the US and Canadian governments about $7.5 billion in loans and reported this week that May 2011 sales were up 10 percent over last year, due mostly to increased Jeep sales.

“I think we’ve seen some really positive and encouraging signs, and we think that at this two-year anniversary, it’s reasonable to kind of take note and account of those things,’’ said Ron Bloom, assistant to the president for manufacturing, at a White House briefing Wednesday.

Today, Obama will visit a Chrysler Jeep plant in Toledo, Ohio, where 1,700 employees make Jeep’s Wrangler and Liberty models, as well as Dodge Nitros. The visit is the latest stop on the administration’s victory tour over the success of the auto bailout. Vice President Joe Biden visited the plant last summer.

“In Ohio, it won’t be called a bailout if the economy continues to improve,’’ said Herb Asher, a political scientist at The Ohio State University, “it will be called saving an industry.’’

Democrats are seeking to turn the issue against would-be Republican presidential candidates who opposed the financial rescue of the Detroit automakers, especially former Governor Mitt Romney of Massachusetts. In an opinion column in November 2008, Romney advised: “Let Detroit go Bankrupt.’’

Romney is a native of Michigan; his father, George, once ran American Motors before serving as the state’s governor.

“This is to hit Romney where he lives,’’ said Garrison Nelson, a political scientist at the University of Vermont, commenting on the Democratic strategy.

The outcome of the 2012 presidential contest could rest with the Rust Belt — and the states of Ohio, Michigan, and Indiana, which Obama won in 2008. Ohio stands out as a bellwether: No candidate since Democrat John F. Kennedy in 1960 has won a presidential election without carrying Ohio, and the administration is aware that the Rust Belt swung hard toward Republicans in the 2010 election.

“This issue is a huge social signal to the upper Midwest that this is a White House that cares about them,’’ said Chris Lehane , a Democratic strategist and former aide to Vice President Al Gore.

Obama has repeatedly cited the auto industry bailout on the campaign trail, at fund-raisers in California, New York, and Boston. He has sought to cast the government loans not as bailouts but as tough decisions.

“There have been times where we had to make some really tough decisions, really unpopular decisions, digging ourselves out of this incredible economic hole that we were in,’’ he said at a New York fund-raiser in March. “. . . We had to save the US auto industry, and everybody said that wasn’t going to work.’’

The $80 billion in auto bailouts accelerated in 2009 under President Obama, who made the decision to inject huge sums into GM and Chrysler and guide the automakers through bankruptcies. Chrysler was forced to merge with the Italian carmaker . At GM, chief executive Rick Wagoner was pushed out, and the company forced to cut brands and streamline. Workers and retirees saw pay and benefit cuts.

“Chrysler was functionally a dead patient,’’ said Jim Hall of the industry consulting firm 2953 Analytics. “They stopped product development; they released vehicles that no sane person would have put on the market.’’

At the time Romney’s column appeared, auto executives had been lobbying Capitol Hill for a bailout that was much the same as the banks received, with few strings attached.

“Mitt Romney argued that instead of a bailout, we should let the car companies go through a restructuring under the protection of the bankruptcy laws,’’ Andrea Saul, a Romney spokeswoman, said this week.

Former Governor Tim Pawlenty of Minnesota has questioned why the automakers could not use private financing and said this week in a campaign statement: “President Obama is kidding himself if he thinks his policies have strengthened America’s economy.’’

Another likely presidential candidate, Minnesota Congresswoman Michele Bachmann, said in 2008: “Throwing taxpayer money at Detroit’s spiraling problems will not fix their long-term management and productivity problems.’’ Her opposition to the bailouts has not changed, her office said this week.

Industry analysts said no private money was available to save the auto giants in 2009.

And without billions in loans, “these companies would have liquidated,’’ said Kristin Dziczek, director of the labor and industry group at the Center for Automotive Research, a nonprofit in Ann Arbor, Mich.

Some economists said the companies could have been reorganized with less government assistance. Peter Morici, an economics professor at the University of Maryland, said underwriting only bankruptcy-related financing would have allowed the government to extract itself from involvement with the companies as soon as they emerged from bankruptcy.

“They would have been out of it, they wouldn’t have lost any money,’’ said Morici, who testified on Capitol Hill in fall 2008 against providing financial assistance.

Bloom, the president’s point man on manufacturing, declined Wednesday to predict how much money taxpayers stand to lose when the bailouts are wound down. To date, only $40 billion has been repaid to the government. Another $40 billion is tied up in stakes in GM, Chrysler Group and Ally Financial, the country’s largest provider of car loans.

But Bloom said those numbers do not account for what the country gained. The Center for Automotive Research estimates that the federal government’s action in the industry saved 1.1 million jobs in 2009 and 314,000 in 2010, including jobs within related supply chains and retail sales.

Since the bailout loans, turnaround at the companies has been dramatic.

“Chrysler is healthier than it’s been for the past two owners’’ dating back more than 10 years, said Hall. “GM arguably has the best products it has had, and the best balance sheet it has had in probably two or three decades. It’s in a position to start making some serious money.’’