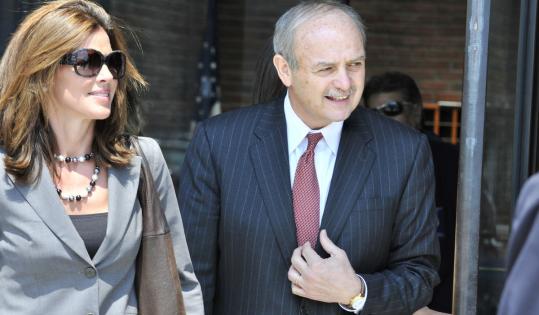 Prosecutors say Salvatore F. DiMasi, the former House speaker, above with his wife, Deborah, had amassed a credit card debt of $50,000, which he did not have to report on disclosure forms. (Josh Reynolds for The Boston Globe)
By Frank Phillips and Noah Bierman Globe Staff / June 1, 2011

Two years after lawmakers tightened ethics rules to calm public outrage over corruption scandals, the state continues to use outdated financial disclosure forms that allow political leaders to avoid providing a clear picture of their finances, business dealings, and potential conflicts of interest.

Yesterday was the annual deadline for Beacon Hill’s decision makers to reveal their financial holdings, but the public can expect to get only a narrow glimpse of politicians’ assets and family income on a form that has not been updated in three decades.

“It is pretty outrageous that these haven’t been updated in 30 years,’’ said Pam Wilmot, executive director of Common Cause of Massachusetts, who helped craft the law in 1979. “They are essentially meaningless in a number of areas.’’

For example, officials must disclose only whether their mortgage is worth “$100,000 or more,’’ but are not required to provide specifics. Stocks must be listed if they are worth $1,000 or more, but fair market value need not be included.

Disclosing ownership of a stock that is worth more than $1,000 is similarly nondescript.

House Speaker Robert A. DeLeo and Senate President Therese Murray both declined, through their spokesmen, to say why the Legislature has not updated the law.

Wilmot and other advocates for open government argue that it is critical to a democracy’s integrity that the public understand the possible conflicts of interest and potentially precarious personal finances of elected officials and decision makers.

“The people have the right to know about the character and conduct of their public officials,’’ said Christopher Daly, a former State House reporter who teaches journalism history at Boston University.

The financial disclosure issue has found its way into the spotlight in recent days as federal prosecutors presented evidence that former House speaker Salvatore F. DiMasi, who is on trial facing corruption charges, was burdened with $50,000 in credit card debt.

DiMasi was not required to report his heavy debt on his annual financial filings with the Massachusetts State Ethics Commission. At his trial, prosecutors argue that such debt helped drive him to take illegal payoffs.

DiMasi is charged with concocting a scheme in which a software firm funneled $65,000 to him while he pushed state officials to grant a lucrative contract to the company. If DiMasi’s credit card debt had been disclosed, it might have raised red flags about his troubled finances.

The state’s public disclosure laws and the Ethics Commission that enforces them were created after a corruption scandal rocked the State House in the late 1970s and sent three state senators to jail. At the time, the law’s disclosure requirements were some of the strictest.

Some lawmakers and public officials have argued that the current law is still sufficient. More specific information about home values, they say, is already available in other public documents. Too much public scrutiny could also discourage public service, they believe.

But other states have made efforts to update their laws to keep them current. Several years ago, Louisiana’s public, fed up with their state’s history of colorfully crooked politicians, demanded tighter laws that transparency advocates now consider the national standard. Louisiana’s governor must report his spouse’s income, the family’s investment income, and his own debts with much more specificity. The state has moved to the top of the Center for Public Integrity’s ranking for best disclosure requirements.

Massachusetts ranks 17th, in part because of its failure to update its law. The state has been chided for not putting disclosure forms online or releasing them in a timely manner.

Two years ago, Massachusetts passed the most sweeping ethics overhaul in decades. It tightened some requirements, increased penalties, and gave the Ethics Commission more enforcement powers. But the governor and legislative leaders did not act on the issue of financial disclosure documents.

Wilmot, who served on Governor Deval Patrick’s task force charged with proposing ethics changes, said the topic had been raised within the group but eventually “fell through the cracks’’ as the governor and the Legislature focused on enforcement and campaign finance reforms. “It was a missed opportunity,’’ she said.

That gaping loophole leaves the public largely in the dark about the financial status of its public officials. For example, the governor is not required to show much detail of his investment assets, his wife’s earnings as a partner in a major law firm, or their ability to pay off mortgages that exceed $5 million.

Patrick, who has argued for transparency in government, does not have to disclose how he and his wife pay $320,000 in annual mortgage payments on properties in Milton and the Berkshires, beyond listing the $132,646 salary he makes as governor.

Lack of disclosure has been less controversial for state leaders such as DeLeo and Murray, because their assets and debts appear far less extensive.

Patrick argues that the wealth he accumulated as a former counsel to both and Texaco and his wife’s salary as a partner at the Boston law firm Ropes & Gray is enough to meet their debt payments, but the law does not require him to disclose specifics. He was also paid a $1.3 million advance for his recently published book.

There has never been any indication that the governor has any financial problems.

As he has in the past, the governor, through a spokesman, sharply rejected requests that he release his tax filings, a disclosure several past governors have made. In the campaign five years ago and in his recent book, Patrick took issue with news organizations’ examination of his wealth and his real estate, suggesting he was being singled out because of racial bias.

One reason his staff says he will not open up his personal accounts is that he does not want to expose his wife’s salary at Ropes & Gray. Unlike Massachusetts, Louisiana and several other states, as well as the federal government, require officials to list spouses’ salaries.

Neither DeLeo nor Murray is married. When DiMasi was speaker, his wife Deborah’s finances came under fire. In 2008, she worked with a television production unit owned by public works contractor Jay M. Cashman, but no salary was listed in his reports. At the same time, DiMasi, behind the scenes, was pushing House action on Cashman’s plans to build a wind farm in Buzzards Bay.