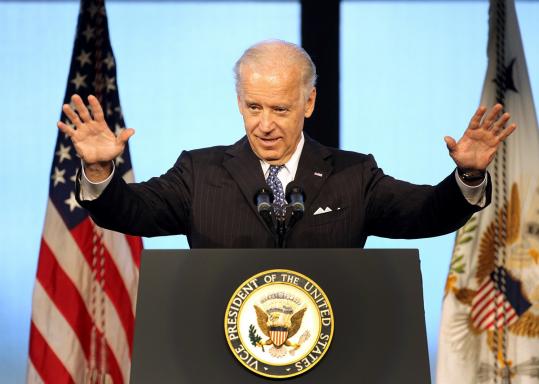 Vice President Joe Biden yesterday marked the 50th anniversary of President Kennedy’s speech challenging the nation to put a man on the moon by lamenting that the United States has sometimes lost its will to pursue similarly big dreams.

The Democrat spoke to 400 philanthropists, policy makers, scientists, and other academics at the John F. Kennedy Presidential Library and Museum during a fund-raising luncheon that launched a 10-year national plan to advance neuroscience research.

The campaign comes amid declining money for brain research and, thus, fewer experimental treatments, said Patrick Kennedy, a former US Representative and cochairman of the “One Mind for Research’’ initiative.

The goal is to develop a better understanding of the brain and find treatment for disorders including Alzheimer’s disease, mental illness, and post-traumatic stress disorder.

Biden, who has had two cerebral aneurysms, told the audience he is fascinated by brain research — which he likened to the “modern moon shot’’ — because of his personal experiences and his visits with hundreds of soldiers wounded in war. He urged the nation to invest in the field despite naysayers who cite the national deficit and a fragile economy.

“We’re better positioned to meet those daunting challenges in this young century,’’ Biden said. “America’s character has not changed; it has not changed from what it was in 1961. What has occasionally changed is the lack of vision and lack of leadership and lack of boldness and lack of resolve. We’ve become too incremental, in my view, in everything we do.’’

Biden recalled being an 18-year-old at a Catholic boys school when Kennedy, as the newly inaugurated president, addressed Congress and laid down a monumental challenge.

“I believe that this nation should commit itself to achieving the goal, before this decade is out, of landing a man on the moon and returning him safely to the earth,’’ Kennedy declared on May 25, 1961.

That goal was achieved in July 1969, nearly six years after Kennedy was assassinated, when the crew of Apollo 11 visited the moon and returned home.

Biden told his audience: “Even then, my friends and I sensed that this challenge was about a hell of a lot more than landing on the moon. It was bigger than that. This was about a truly new frontier. You just knew in your gut that in the process of getting to the moon, it would open up whole new vistas for humanity.’’

The new frontiers on earth, he said, are as challenging and as capable of being conquered as the frontiers of space. But the goals are not America’s alone. Nations such as China, India, and Brazil that are also seeking to win the future have significantly invested in education, research, infrastructure, and innovation, he said.

“If we shrink from the bold approach that was laid out here 50 years ago, we run the risk of being left behind,’’ Biden said. “We’re either going to lead or follow. There isn’t anything in between.’’