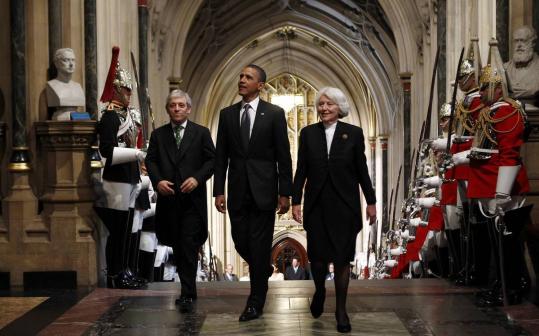 LONDON — Britain and the United States remain indispensable partners, President Obama declared yesterday in an address to the British Parliament, even as he and Prime Minister David Cameron revealed subtle differences over issues like the military campaign in Libya and the Middle East peace process.

“The time for our leadership is now,’’ Obama proclaimed, asserting the relevance of the British-US alliance in a world of rising powers and new threats. He rejected the argument that emerging titans like China, India, and Brazil “represent the future, and the time for our leadership has passed.’’ The United States and Britain, he said, “remain the greatest catalysts for global action.’’

The president’s speech, to a rare joint session of Parliament under the vaulted timbers of ancient Westminster Hall, was the capstone of a two-day state visit to Britain in which Obama was greeted with great pomp and personal warmth. Yet earlier, after a backyard barbecue at 10 Downing Street, Obama and Cameron demonstrated that even those in a “special relationship’’ fail to agree on everything.

Speaking at a news conference, Cameron refused to rule out British support for the Palestinians as they push for UN recognition of an independent state. He suggested that the threat of European support could force the Israelis and Palestinians back to peace talks. Obama, however, reiterated his opposition to the campaign, saying, “What the United Nations is not going to be able to do is deliver a Palestinian state.’’

The president struck a cautious note about the US military role in Libya, which contrasted with Cameron’s pledge to intensify the pressure on Libya’s leader, Moammar Khadafy. While Obama said he was committed to the operation, even if it took a long time, and voiced confidence that Khadafy would be forced out, he rejected calls for the United States to deploy more aircraft.

“I think there may be a false perception that there are a whole bunch of secret, super-effective air assets that are in a warehouse somewhere that could just be pulled out and that would somehow immediately solve the situation in Libya,’’ Obama said, after raising the issue himself. “That’s not the case.’’

Cameron, while seeking to project unity on Libya, said each country had to ask itself, “What is it that we can all do to make sure the pressure is really brought to bear’’ on Khadafy. Britain, he said, would look at all options, though he did not confirm reports that it planned to escalate the air campaign by following France’s lead in sending Apache attack helicopters to Libya.

Calling each other Barack and David, Obama and Cameron strived for the easy familiarity of previous leaders like George W. Bush and Tony Blair. Cameron praised Obama for his proposal to use Israel’s pre-1967 borders, with land swaps, as a starting point to break a deadlock between Israelis and Palestinians. But both men drew a clear distinction between the “special relationship’’ that existed during the Bush-Blair years and the relationship today.

“We are doing things in a different way,’’ Cameron said. “We have ruled out occupying forces, invading armies.’’

For Obama, yesterday was a day of business after the high ceremony of Tuesday, when he was feted by Queen Elizabeth II at a state dinner at Buckingham Palace and honored with a 41-gun salute.

He spent two hours at the Downing Street residence of Cameron, and also met with Deputy Prime Minister Nick Clegg.

The two leaders discussed the timetable for withdrawing troops from Afghanistan, efforts to help Arab countries achieve democracy, and how each was addressing spiraling deficits. Cameron’s Conservative-led coalition government has undertaken deeper budget cuts than the Obama administration, but Obama deflected suggestions of a philosophical divide, saying it was natural that they would devise their own remedies.