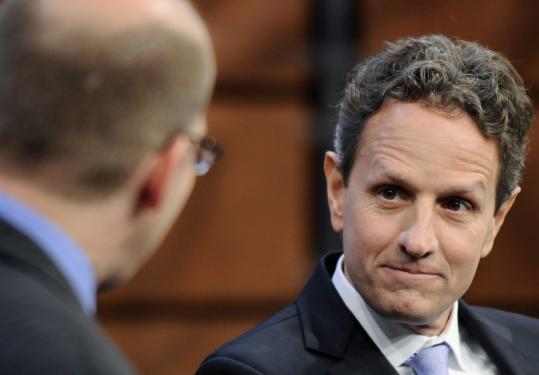 Warren got into a verbal scuffle with the chairman of a House panel yesterday over scheduling and her previous congressional testimony, a sign of growing tension between her and Republicans over the agency's mission and structure.

At the hearing, Representative Patrick McHenry, a North Carolina Republican, questioned the ''veracity'' of her previous statements about the bureau's role in foreclosure settlement talks. He and Warren also had a testy exchange about whether the committee pledged to a time limit on her appearance.

''The oversight process is a very important thing to preserve and make strong and credible,'' Geithner yesterday said at an event held in Washington's Newseum. ''I think what you saw yesterday will leave everyone to question whether the oversight process is on the up and up, how much is political theater, how much is the necessary tough job of Congress to hold public officials accountable.''

President Obama in September tapped Warren to set up the consumer agency after Senate Banking Committee chairman Christopher Dodd, a Connecticut Democrat, said Warren could not win Senate confirmation to be its director. Less than two months before the agency's official start date of July 21, no nomination has been made.

The bureau, which is under Treasury's auspices until it begins formal operations, has become a target of House Republicans. The Financial Services Committee on May 13 approved bills that would replace the director with a bipartisan, five-member board, delay its start date if there is no confirmed director, and ease the process by which other bank regulators can veto the bureau's rule-makings.

This month, 44 Senate Republicans said in a letter to Obama that they would not vote for a director without changes to the agency's structure. That would prevent the Obama administration from obtaining the 60 votes it needs to confirm a nominee in the 100-member Senate.

The White House has not publicly ruled out nominating Warren. Yesterday a coalition of activist groups and individuals began a petition drive and online advertising campaign to urge Obama to name her temporarily when Congress is out of session.

''Since Republican senators said they wouldn't confirm anyone that the president nominates, he has no choice but to make a recess appointment,'' Stephanie Taylor, a cofounder of the Progressive Change Campaign Committee, said in an e-mailed statement. ''So we're showing him that there's broad public support for Elizabeth Warren. She has consistently shown, including in the House hearings yesterday, that she's the best qualified candidate for the job.''

The petition is signed by groups including the Sierra Club, an environmental lobby, and the Campaign for America's Future.

At yesterday's hearing, McHenry accused Warren of misleading lawmakers about the bureau's role in the foreclosure talks. Warren answered that the bureau gave ''advice'' on the talks, which are taking place between state and federal officials and mortgage servicers including Wells Fargo & Co. and JPMorgan Chase & Co.

Toward the end of the hearing, Warren and McHenry got into an argument over whether she would remain past 2:15 p.m. to answer additional questions. Warren insisted the committee had promised she would be released by then, something McHenry denied.

That prompted Representative Elijah Cummings, a Democrat from Maryland, to defend Warren. ''I am trying to be cordial here,'' he said. ''But you just accused the lady of lying.''

McHenry adjourned the hearing after Warren offered to answer additional questions for the record in writing. ''I share the Secretary's concerns about the integrity of our oversight process. Ms. Warren's behavior yesterday did a great disservice to this administration,'' McHenry said in an e-mailed statement yesterday.

''I thought what happened yesterday was deeply unfair to her personally,'' Geithner said of Warren yesterday. ''I think she's done an exceptionally good job.''