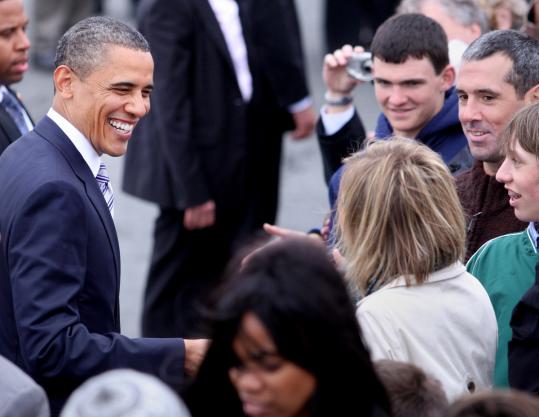 President Obama paid a quick but rewarding visit to Boston yesterday, rallying supporters at a pair of fund-raisers to energize a Democratic stronghold and bolster his campaign coffers.

Jetting into town for the second time in three months, Obama addressed a crowd of 900 at the Boston Center for the Arts in the South End before dining with big-money benefactors at the Brookline home of advertising executive Jack Connors Jr.

The evening event, which couples paid $35,800 to attend, was expected to raise more than $2 million, part of an aggressive fund-raising drive since Obama formally launched his reelection campaign last month. With its deep reservoir of Democratic donors, Massachusetts will probably play a major role in the party’s fund-raising efforts.

On Tremont Street, where hundreds waited in a cold rain in hopes of a glimpse of the president at the arts center, support for Obama was unconditional.

“I just want to see him in person,’’ said Jaheim Payne, who said seeing Obama would be an unforgettable memory he would tuck away forever. “I have a folder in my head and I will never forget it.’’

Sadly, Payne and his friends were only able to see the president’s limousine as it pulled into the venue. But that was enough.

A short time before that, at 4:22 p.m., Air Force One touched down at Logan International Airport, where Governor Deval Patrick and Boston Mayor Thomas M. Menino were on hand to greet their fellow Democrat.

Once he had arrived in the South End, Obama told a capacity crowd at the arts center he needed their support because his administration wanted to finish the job it started.

“Change is hard. Change takes time,’’ he said. “But it’s possible. It should inspire us to finish what we started.’’

The president said he supports efforts to reduce the deficit but would not “sacrifice our future.’’ He drew sustained applause when he mentioned the passage of health care reform and nominating two women for the Supreme Court.

He talked about rolling back tax cuts for the wealthy, saying the country’s rugged individualism is tempered by a belief that “we’re all in this together.’’

Before Obama spoke, star Ray Allen likened the Obama campaign to a sports team that needed a focused effort to succeed. “Our colors are red, white, and blue. Our coach is Obama,’’ he said.

In an impassioned speech, the governor denounced what he called the negativity of Obama’s detractors and praised the president’s record, citing his stewardship of the economy and the successful raid that killed Osama bin Laden.

Patrick called on the crowd to return Obama to office for another term.

It was the president’s second visit to Boston recently. In March, he attended a Democratic fund-raiser at the Museum of Fine Arts after he delivered a speech on education reform at a Dorchester high school.

Earlier yesterday, Obama delivered the commencement address at the US Coast Guard Academy in New London, Conn., where he urged the nation to pull together in tough times. “We remember our moral compass, that we are citizens with obligations to each other; that we all have responsibilities; that we’re all in this together; that we rise and fall as one — that we are the United States of America,’’ he said.

At the Brookline event, Obama cited his administration’s accomplishments and future goals.

“We have spent the last two-and-a-half years cleaning up a big mess,’’ he said. At the same time, implementing the health care bill will “require us to roll up our sleeves.’’

He criticized Republican plans to replace Medicare with a voucher program, saying such changes would increase medical costs for the elderly. “That’s not the America I believe in,’’ he said. He expressed confidence that he will win reelection, saying that although he is older and grayer, his “commitment is the same.’’

Outside the fund-raiser, the small crowds that huddled under the trees to stay dry were surprised to learn that the president’s motorcade had arrived early, beating them to the spot.

“I’m in the doghouse,’’ said Jeremy Kindall, 41, an interior designer who brought his two young daughters to see Obama. “We’re going to send him a picture and say ‘Sorry we missed you.’ ’’ Hannah, age 8, however, sounded more than sorry. “Well, I was really, really, really, really excited until we found out we missed him,’’ she said. “Then I was pretty much entirely disappointed.’’

She wasn’t the only child whose dreams of meeting the president were dashed. Behind the barricades at Tremont and Berkeley streets yesterday afternoon, a group of young boys from a nearby after-school program waited patiently. The president’s visit had a secondary benefit — no homework.

Excitedly, the boys rattled off their expectations while waiting in the cold drizzle. At the top of the list, a handshake.

“I’m going to shake his hand because he’s the 44th president and because this is the first I’ve seen him,’’ declared Jamori Brown, 8.

It was not to be. And as it turned out, neither was the day off from homework. After the excitement was over, they went back upstairs and hit the books. They had not gotten a presidential pardon after all.