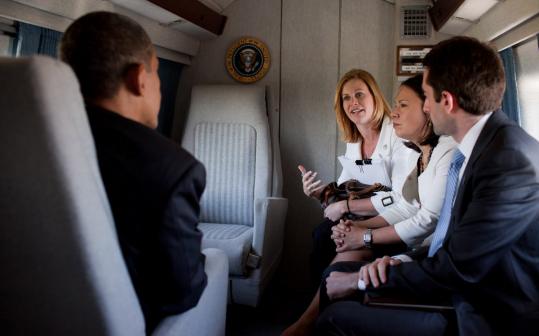 Stephanie Cutter (center), pictured aboard Marine One, has worked in the upper echelons of Democratic politics for two decades. (Pete Souza/ White House/ File)
By Glen Johnson and Donovan Slack Globe Staff / May 18, 2011

WASHINGTON — When Senator Edward M. Kennedy collapsed in May 2008 with what he would later learn was a terminal brain tumor, Victoria Reggie Kennedy first called a few family members.

Then she dialed Stephanie Cutter.

As the senator and his wife coped with his sudden cancer diagnosis, Cutter, who grew up in Raynham and graduated from Smith College, reprised her past role as Kennedy’s communications director to handle the onslaught of worldwide media attention.

The challenge was to satisfy the public demand for information while respecting the family’s privacy.

Cutter is back in the public arena today, working for the past year as a top adviser in the White House. Her boss is President Obama, who is visiting Massachusetts today for campaign fund-raisers in Boston and Brookline.

Along with two others with Massachusetts ties, David Simas and David Plouffe, Cutter is among those charged with honing Obama’s message and spreading it through the full spectrum of White House, congressional, and outside channels. They must overcome an onslaught of Republican criticism about White House health care, deficit-reduction, and foreign-affairs policies that will only intensify in the building campaign.

Their success may well determine whether the president wins a second term.

“Anything that any of us asked her to take on, she took on and advanced,’’ said David Axelrod, a former senior Obama adviser and Cutter’s boss until January.

In an interview, the governor recalled being deluged with resumes when Obama was elected president, suddenly “the best friend to people I had never met,’’ because of his close relationship with the fellow Chicagoan.

But Patrick had a singular goal when he phoned Axelrod after the election: to recommend Simas for a job in the fledgling administration.

“ ‘This is the one person I’m going to ask you to take, and you will not be disappointed,’ ’’ the governor recalled telling Axelrod.

Axelrod ended up hiring Simas, who completed a heady climb from Bristol County registrar of deeds to White House aide in little more than two years.

“David doesn’t eat or sleep,’’ said Doug Rubin, who was Patrick’s chief of staff and worked alongside Simas for two years. “He was always the first one to work, even though he had the longest commute from Taunton. And he was always the last to leave.’’

Simas is now the president’s deputy assistant for special projects, working under Plouffe and alongside Cutter.

Plouffe, one of the nation’s most prominent political consultants, joined the administration as a senior adviser to the president just after the midterm elections. In November, he completed a stint as the top outside campaign consultant to Patrick, just as he and Axelrod had done for the governor’s winning campaign in 2006.

Plouffe previously worked for US Representative John W. Olver, a Democrat from Amherst, and he and his wife recently bought a house on Cape Cod.

In the book he wrote after the 2008 election, “The Audacity to Win: The Inside Story and Lessons of Barack Obama’s Historic Victory,’’ Plouffe labeled messaging a critical pillar of politics.

“In any organization, you have to determine your pathway to success and commit to it,’’ he wrote. “There will inevitably be highs and lows.’’

The trio’s jobs took on special importance after the midterm elections, which cost Obama his Democratic majority in the House, weakened it in the Senate, and put his reelection prospects in jeopardy.

“The president said to us after the election that for many reasons, primarily the sort of never-ending crises we faced in the first two years, we didn’t get a chance to tell our story well,’’ Dan Pfeiffer, the White House communications director, told the Globe during an interview in his West Wing office.

The task of improving that story and its delivery fell largely to Plouffe, Cutter, and Simas.

“This is where all three individuals are very good,’’ said Pfeiffer, who addressed inquiries about the three aides. The White House generally does not make its staff members available for biographical interviews.

Simas, 41, starts the process at 5:30 a.m. each day, scanning an administration press clippings packet for stories in heartland newspapers such as the Columbus Dispatch, as well as his hometown Taunton Daily Gazette.

He is looking for how things play in Peoria and what is of concern outside the Beltway. Simas makes sure Plouffe, 43, is apprised of the news and how policy is progressing in various Cabinet agencies.

Cutter and Plouffe then join other senior staff at a daily 7:30 a.m. meeting to discuss how to cope with the news they confront and how to drive coverage of their agenda.

One thematic underpinning to their work is the “Winning the Future’’ mantra, unveiled in Obama’s State of the Union speech and now plastered across the backdrops at administration events.

It was painted across the backdrop for Obama’s visit in March to TechBoston Academy in Dorchester.

Being part of the president’s senior team is the most prominent of a series of high-profile assignments given to the 42-year-old Cutter, who has worked in the upper echelons of Democratic politics for two decades.

She joined Kennedy’s Capitol Hill staff in 2001 and spent the next two years supervising all the senator’s communications efforts. Cutter returned in 2005 as a senior adviser and remained linked to Kennedy until his death.

“She provides a full spectrum of communication skills,’’ said Mary Beth Cahill, who was working as Kennedy’s chief of staff when she hired Cutter.

In fall 2003, Senator John F. Kerry revamped the senior staff of his Democratic presidential campaign, tapping Cahill to be its manager. She, in turn, immediately hired Cutter as communications director.

Cutter traveled with Kerry throughout 2004, helping develop strategy for his three debates with President Bush, as well as his convention message.

She also was on the team for its most controversial communications moment: Its delayed response to television ads attacking Kerry’s military record that were aired by the Swift Boat Veterans for Truth.

After Bush beat Kerry, Cutter went to work for herself, founding the Cutter Media Group. Nonetheless, she continued government work, serving as an adviser to Senate majority leader Harry Reid and, later, replicating a campaign role during the 2008 race as an Obama surrogate on television and chief of staff to Michelle Obama.

Cutter’s task then was to help Michelle Obama rebound from accusations that she was not patriotic enough and was a political hard-liner.

The president later tapped Cutter to be transition spokeswoman, before calling on her again last year to help rebuild flagging support for his health care overhaul.

Obama underscored her importance to him in a press release announcing her hiring on April 22, 2010.

“Stephanie is one of the most respected professionals in public affairs and has an innate understanding of the nexus between policy and communications,’’ the president said.

Vicki Kennedy is proud of Cutter’s new role, as well as thankful for her work three years ago when her husband was stricken.

“She gave us the room to be private while we were getting a definitive diagnosis, as she continued to be honest with the press about what we knew and did not know yet,’’ said Mrs. Kennedy. “I think that was a feat of just incredible professionalism and compassion for us.’’ 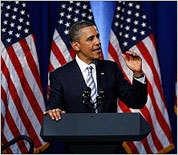