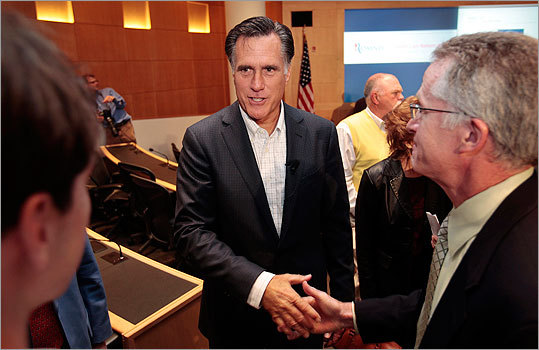 Mitt Romney chose the University of Michigan, in his native state and support base, to deliver the policy address yesterday.
By Matt Viser Globe Staff / May 13, 2011

ANN ARBOR, Mich. — Mitt Romney stoutly defended his Massachusetts health care law in the face of its conservative critics, and called yesterday for replacing President Obama’s national plan with a more state-based overhaul of the US health care system.

In the first policy speech of his budding presidential campaign, Romney gave his strongest endorsement to date of the Massachusetts plan, including the decision to require residents to obtain health coverage.

“A lot of pundits around the nation are saying that I should just stand up and say this whole thing was a mistake, that it was a boneheaded idea and I should just admit it,’’ Romney said. “But there’s only one problem with that: It wouldn’t be honest. I, in fact, did what I believed was right for the people of my state.’’

But his plan for the country is radically different from his plan for Massachusetts. It includes no mandate for individual coverage, and changes tax laws to encourage people to buy their own portable insurance rather than relying on their employer’s coverage.

Even as Romney criticized Obama’s national plan, his defense of mandated coverage in Massachusetts irritated conservatives.

“I can tell you right now, that’s not going to satisfy the average caucus-goer here in Iowa,’’ said Steve Scheffler, chairman of the Iowa Faith and Freedom Coalition and a member of the Republican National Committee. “A speech defending any kind of mandate is not what caucus-goers want to hear. I don’t know how he can condemn ObamaCare if he’s still defending his plan.’’

Romney, who has been criticized as a political flip-flopper, seemed determined to withstand the latest criticism from within his own party and live up to the title of his book: “No Apology.’’

But he seemed to recognize the new political perils of standing by his prime achievement as governor, saying the fortunes had turned for him on the issue from four years ago.

“That was a time when my Massachusetts health care plan was considered, at least by me, to be an asset politically,’’ Romney said. “I hear some laughter in the room. That’s not the case now.’’

He spoke at the University of Michigan Cardiovascular Center. He was also in the state, where he was born and where his father was governor for three terms, for a fund-raiser.

Romney harshly criticized the current health care plan — spearheaded by Obama and passed by a Democrat-controlled Congress last year — and said he would repeal it and replace it with his own plan.

“If I’m the nominee on the Republican side of the aisle, and get the chance to debate President Obama, this is what we’re going to be talking about,’’ Romney said. “Who has the better plan for America?’’

His new, five-point proposal has an overarching goal of giving states more power in the health coverage arena. He would give states block grants for Medicaid, for example, and allow them to craft their own coverage plans.

He also talked of a new market-based system in which insurers would compete for customers across state lines and Consumer Reports would rank the best plans.

His plan gives people incentives to purchase their own insurance and have more financial stake in their health care decisions. To do so, he proposes a system that would allow people to take the money that their employer puts toward their health care and use it themselves.

He also wants the federal government to give people a tax deduction if they buy their own insurance, just as those who buy it through their employers can now have their health costs taken out before taxes.

An adviser to Romney said the plan would not add to the deficit or raise taxes, but Romney has not yet detailed how much the tax deduction would cost and exactly how that would be offset.

Romney’s plan also includes a change in the system of dealing with malpractice, capping damages in lawsuits and giving grants to states to come up with alternate ways to resolve legal disputes.

His plan would still ensure that some people with preexisting conditions aren’t refused access to coverage, one of the most popular aspects of the Obama plan. But Romney said that that requirement would apply only to those who have already had insurance for an undefined amount of time — which could still allow insurers to deny coverage.

He also called for a shift in the way the federal government administers Medicaid. Rather than have Washington match state spending on health care for the poor, his plan would issue block grants to the states, and give them freedom in deciding how to spend the money.

Romney said he would later unveil a plan to reform Medicare, which has been a highly controversial topic recently after House Republicans voted for dramatic changes that would affect the elderly. Romney said he appreciated that plan — offered by Representative Paul Ryan of Wisconsin — but said his would be different.

The former governor has also pledged that on his first day in office, he would issue an executive order allowing all 50 states to have waivers, exempting them from federal requirements of the health care law. Several health care and constitutional law specialists, though, said a new president would be limited in what he could overturn without an act of Congress.

“It would be unconstitutional for the president to simply grant an across-the-board waiver of compliance with federal law,’’ said Timothy S. Jost, a law professor at Washington and Lee University. “Which doesn’t mean it’s not a good campaign speech.’’

The health care law currently allows states to opt out of health care provisions starting in 2017, as long as they meet certain conditions. There are efforts from Congress and the White House to move that date up to 2014, but no action has been taken. The current law also allows states to be temporarily exempted from certain provisions, but not from the entire law.

The adviser said after the speech that Romney would encourage states to seek the waivers and, even if waivers wouldn’t be able to be implemented until 2017 under current law, states would effectively stop implementing the law.

Immediately after the speech, one of his Republican primary rivals criticized Romney, calling his Massachusetts law “the precursor to national socialized medicine.’’

“Romneycare has, in fact, not made health care better or saved costs in Massachusetts. It’s done just the opposite,’’ former senator Rick Santorum of Pennsylvania said in a statement. “This is not a failure of execution, but a lack of foresight on Governor Romney’s part to understand the implications of his policy proposals.’’

Still, in his speech Romney clung to a conviction that it is part of the national character to provide health care to people, even while he disparaged Obama’s plan that aims to do that.

“There’s a recognition in this country that we are a grand and generous people,’’ Romney said at the close of his 30-minute address. “The idea that we would ever say to people, ‘Tough luck, you’re poor, you’re not going to have health care,’ that’s just not American. We’re going to care for one another.’’

“Overall am I proud of the fact that we did our best for our people and got people insured?’’ he added. “Absolutely.’’