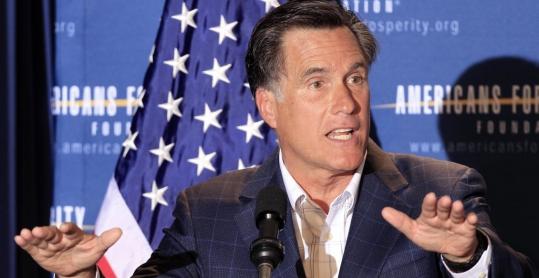 Mitt Romney is planning to address the Massachusetts healthcare law in his speech tomorrow. (Jim Cole/Associated Press)
By Matt Viser Globe Staff / May 11, 2011

WASHINGTON — Mitt Romney, whose emerging candidacy for president has been clouded by GOP doubts over his health care plan in Massachusetts, is planning a bit of political jujitsu tomorrow: taking the biggest perceived negative of his campaign and attempting to turn it into a positive.

The former Massachusetts governor will seek to redefine his candidacy by delivering a major speech outlining his vision for dismantling President Obama’s overhaul and creating a new national model.

Romney is expected to propose tax breaks for consumers buying coverage on the open market; a requirement that insurers cover patients with preexisting conditions; and provisions giving states more power in the health coverage arena.

His advisers say they wanted Romney to deliver this, his first major policy speech, before he announces his formal campaign and begins participating in debates, as a way to blunt the attacks that are sure to come. They also want him to be seen as putting forth ideas on not only a substantive issue, but one that has dogged him for the past year.

“What will be clear once he’s finished with his presentation is, one, he’s got the same position as every other candidate when it comes to ObamaCare,’’ said one adviser, speaking on the condition of anonymity to discuss campaign strategy. “And secondly, he will have been the first to lay out his own plan for replacing ObamaCare with reforms that have lower costs and put the states back in the driver’s seat.’’

The health care plan that Romney signed as governor in 2006 provided a template for the national plan signed by Obama last year. With Republicans focused on attacking Obama’s plan, many have raised questions about whether Romney would be the right advocate for their party.

Romney is planning to address the Massachusetts law in his speech tomorrow, but his aides said that is not going to be a major component of a speech that will focus more on his plan for moving forward.

By giving the speech at the University of Michigan’s Cardiovascular Center in Ann Arbor, Mich., Romney is returning to friendly territory. It is the state where he announced his 2008 campaign, and it is where his father served three terms as governor. Romney also won the Michigan primary in 2008 and is expected to compete there again next year.

The speech marks a more active phase of Romney’s campaign. On Monday, he is planning to travel to Las Vegas for a major fund-raising event, and over the next two weeks he also plans to campaign in two early battleground states, Iowa and South Carolina.

But everywhere he has gone in recent months — forums, brief press conferences, television appearances — he is asked about health care.

“Given the benefit of hindsight, would you still sign the health care bill?’’ a moderator asked him at a forum in Manchester, N.H.

“Will [you] acknowledge that RomneyCare was a mistake?’’ Larry Kudlow asked him on CNBC.

“Just one question,’’ a physician asked him after a foreign policy speech in Las Vegas. “It’s related to health care.’’

In those appearances, he has outlined several planks of a proposal to change the national health care law, and his campaign provided several details on the plan yesterday.

For one, it would ensure that people with preexisting conditions aren’t refused access to coverage, one of the most popular aspects of the Obama plan.

He would also give a tax deduction to those who buy their own health insurance, just as those who buy it through their employers can have their health costs taken out before taxes. Although providing tax breaks would cost the government money, and could add to the deficit, the plan is revenue- and tax-neutral, a Romney adviser said. The adviser would not elaborate, saying Romney would provide details in the speech.

The plan would also include some type of malpractice provision, which has been a persistent issue brought up by Republicans and, increasingly, by Democrats.

It is unclear how many of the 30 million currently uninsured — the number President Obama says his plan covers — would be covered under Romney’s. An adviser said the plan would empower states to provide health care to their residents, so it would be up to individual states to undertake insurance reform.

Although he has opposed Obama’s plan, Romney has still defended the individual mandate in Massachusetts, which requires residents to obtain health insurance. That component of the national plan has been a lightning rod for conservatives who don’t want government telling citizens what to do.

“To say the least, he needs to explain what it is or was — and if it’s comparable to ObamaCare, I think that some effort needs to be made to repudiate that as a mistake,’’ said Steve Scheffler, chairman of the Iowa Faith and Freedom Coalition and a member of the Republican National Committee. “There’s mandates in [the Massachusetts plan] there, which is troublesome to some people, myself included. I would hope in the speech he’s going to talk about that, because if he doesn’t it’s going to haunt him for the rest of the campaign.’’

The speech is something many political observers, and even supporters, have said for months that Romney must do. It is similar to a speech he gave in Texas four years ago to help dispatch questions about his Mormon faith. In that case, though, Romney waited until just weeks before the Iowa caucuses to give the speech.

“In some respects, there’s some opportunity for the governor to take an albatross and turn it into an advantage,’’ said Steve Lombardo, a Washington-based Republican consultant who advised Romney’s 2008 campaign but is not working for any candidate so far this year. “If you end up winning the nomination sometimes you take a weakness and turn it into a strength.’’