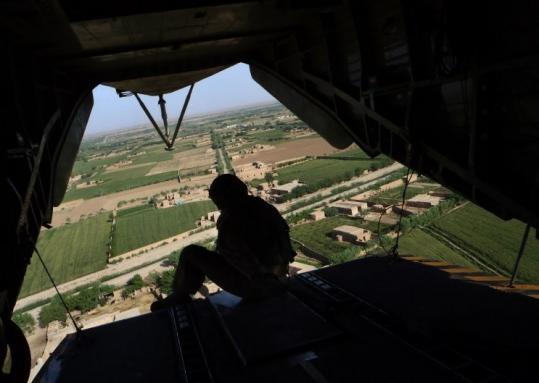 A US Marine helicopter crewman looked out at the Marjah district yesterday, a day after Osama bin Laden’s killing. (Bay Ismoyo/AFP Getty Images)
By Theo Emery Globe Staff / May 4, 2011

WASHINGTON — Osama bin Laden’s death fueled demands yesterday for a hastened drawdown of US forces in Afghanistan, despite warnings that a rapid withdrawal could lead that nation into chaos.

Fewer than 100 Al Qaeda fighters are believed to remain in the country, according to CIA assessments, and bin Laden’s death is the most dramatic illustration of how attacks have decimated the terrorist group’s leadership.

“With Al Qaeda largely displaced from the country, but franchised in other locations, Afghanistan does not carry a strategic value that justifies 100,000 American troops and a $100 billion per year cost, especially given current fiscal constraints,’’ Senator Richard G. Lugar, an influential Republican voice on foreign policy for decades, said at a Senate Foreign Relations Committee hearing yesterday.

The death of bin Laden, the Americans’ primary target at the onset of the war 10 years ago, comes at a key juncture. President Obama has vowed to begin withdrawing forces in July and is awaiting an assessment by the outgoing coalition leader, General David H. Petraeus, before revealing how deep the cuts will be and whether combat troops will be included.

The White House said yesterday the killing of bin Laden early Monday morning in Abbottabad, Pakistan, would have no bearing on that decision. “The pace of that drawdown will be determined by conditions on the ground,’’ said Jay Carney, White House spokesman.

[Off the record, some in the administration spoke of a dramatic shift, according to the Washington Post.]

[The Obama administration is seeking to use the killing of Osama bin Laden to accelerate a negotiated settlement with the Taliban and hasten the end of the Afghanistan war, according to US officials involved in war policy, the paper reported.]

[Administration officials think it could now be easier for the reclusive leader of the largest Taliban faction, Mohammad Omar, to break his group’s alliance with Al Qaeda, a key US requirement for any peace deal. They also think that bin Laden’s death could make peace talks a more palatable outcome for Americans and insulate Obama from criticism that his administration would be negotiating with terrorists, the story said.]

[“Bin Laden’s death is the beginning of the end game in Afghanistan,’’ the article quoted a senior administration as saying. “It changes everything.’’]

The time has long passed for any incremental shifts or symbolic cuts, said Representative James McGovern, a longtime critic of the war.

“Enough is enough. This is an incredible blow to Al Qaeda that Osama bin Laden is no longer on the scene, and let’s focus like a laser beam on Al Qaeda [in other countries], and let’s get out of Afghanistan,’’ said the Worcester Democrat, who plans to introduce legislation this week calling on the president to provide an exit strategy.

Bin Laden’s death and the dispersal of his terrorist network from Afghanistan are expected to forge antiwar alliances among unlikely partners. Representative Ron Paul, conservative Republican from Texas, and Representative Barney Frank, liberal Democrat of Newton, have jointly called for troops to be pulled from Afghanistan as part of a global effort to reduce US missions and cut costs.

“You’ll see everybody from the libertarians like Rand and Ron Paul to even the old gray beards like Lugar beginning to express that we’ve done this for 10 years, it’s a bottomless pit, we can’t afford to keep doing it, and this is a good occasion to start to withdraw,’’ said Robert L. Borosage, codirector of Campaign for America’s Future, a Washington group that promotes liberal causes.

Rand Paul, the Texas lawmaker’s son, is a senator from Kentucky.

In October of 2001, there was also an across-the-political-spectrum consensus. The United States, sending CIA operatives and special forces on the ground and bombers to control the skies, had broad support for its campaign to help rebels rout the Taliban, which sheltered Al Qaeda’s leaders in Afghanistan.

The World Trade Center lay in ruins, and the Pentagon building had a gaping hole. President Bush said the goal was to capture or kill bin Laden, the prime suspect in the Sept. 11 terrorist attacks, deny a safe haven to his Al Qaeda network, and drive the Taliban from power.

With the death of bin Laden and the dismantling of the Al Qaeda’s Afghan network, two objectives have been met. Yet, after being ousted in 2001, the Taliban have reemerged, taking large swaths of the country back. Their strength prompted Obama to bolster US forces in the early days of his presidency.

The US cost of the Afghan war is $444 billion so far, according to a Congressional Research Service report in March. In all, more than 2,350 coalition forces have been killed, including about 1,500 Americans.

Several prominent members of Congress on national security warned yesterday that using bin Laden’s death as a justification for a more rapid withdrawal from Afghanistan would only accelerate the advances by the Taliban and embolden Al Qaeda.

“Bin Laden is a historic moment, but it’s not the end of the struggle,’’ said Senator Lindsey Graham, Republican of South Carolina. “Trust me, nobody wants our guys to come home — and gals — any more than I do. I just don’t want them to have to go back.’’

If anything, said Senator Joseph Lieberman, a Connecticut independent, the death demonstrates that the United States should continue its mission with other targets, including leaders of the Taliban in Afghanistan.

“The killing of bin Laden gives us a certain momentum in Afghanistan. That’s all to the good,’’ Lieberman said. “If I was a Taliban leader, all the way up to Mullah Omar, I would be frightened today.’’

Lugar’s counterpart on the Foreign Relations Committee, Senator John F. Kerry, acknowledged bin Laden’s death could be a game-changer in neighboring Afghanistan but suggested that Congress and the administration carefully consider the possible repercussions of ending the fight against the Taliban too soon.

“Some people are sure to ask why don’t we just pack up and leave Afghanistan,’’ said the Massachusetts Democrat, who plans to visit Afghanistan in the next few weeks on a fact-finding mission. “So it’s even more compelling that we examine carefully what’s at stake, what goals are legitimate and realistic, what is our real security challenge, and how do we achieve the interests of our country.

Such a methodical, far-reaching evaluation is vital before there’s any change in strategy, agreed Senator Scott Brown, who asked for permission to serve in Afghanistan for his annual summer training as a member of the National Guard. Intelligence and military experts need to careful review how to move forward in the aftermath of bin Laden’s death, including examining evidence gleaned from his compound, he said.

“Apparently, it was a treasure trove of information and intelligence. If that leads to drawing down quicker, amen to that,’’ the Massachusetts Republican said. “But we’re not going to do it prematurely. We need to keep the pressure on.’’