On Lawrence streets, frustration over mayor 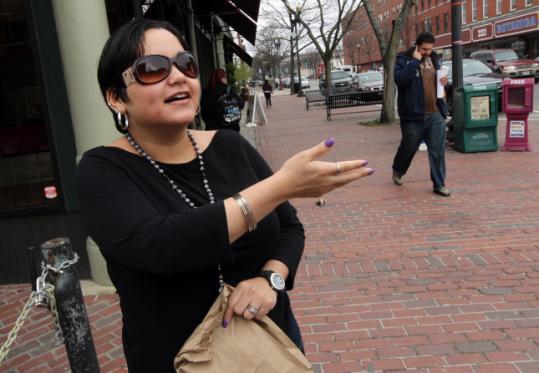 “There’s so much more he could be doing. As a Hispanic who was proud of him, I find this really sad,” said Jenice Astorga. (Bill Greene/ Globe Staff)
By David Abel Globe Staff / April 27, 2011

LAWRENCE — Jenice Astorga looked at the poorly manicured grass on the common across from City Hall and the pocked streets nearby and said she was fed up with the year-old administration of Mayor William Lantigua, who took over this old mill city last year and has become mired in charges of corruption.

“He’s not really doing anything, it seems,’’ said Astorga, 24, who has lived in Lawrence for a decade. “There’s so much more he could be doing. As a Hispanic who was proud of him, I find this really sad — pathetic.’’

Beyond the recent allegations that Lantigua illegally profited from city business, some residents said they are worried that he is not doing enough, quickly enough. They say the corruption allegations against the state’s first elected Latino mayor could bring Lawrence down with him.

Others — jaundiced from years of problems in this impoverished city, where per capita income falls consistently below state and national averages — said the alleged crimes are anything but surprising.

“I want the mayor out,’’ said the Rev. Edwin Rodriguez, a former pastor of El Faro Universal church who is leading the campaign. “He is incompetent, and he hasn’t delivered what he has promised. The city is going backwards. Crimes are up, burglaries, car thefts, you name it. We have the worst economy. The streets are not fixed. He isn’t doing anything he has promised.’’

“We are all sad, because we had invested hope in him,’’ Rodriguez said, adding that he voted for Lantigua. “He presented such a good campaign, but everything is the opposite now. The worst part is that he’s giving the city a very bad image.’’

Lantigua was elected to much fanfare last year. But he raised some ire when he tried to keep his post as a state representative while serving as mayor.

Under fire, he relinquished the State House job. But his subsequent actions — such as writing on mayoral stationery a character reference for a home invasion suspect — have raised questions about his ability to govern.

The Globe reported last week that he is facing state and federal investigations into possible corruption and other potential wrongdoing at City Hall.

In an interview at his office in City Hall yesterday, the mayor defended his work, disputed allegations against him, and insisted that he was not concerned about the recall effort.

But he said the allegations against him have taken an emotional toll.

When asked about allegations that he profited from his control over which companies get towing business with the city and who is permitted to operate taxicabs, he said: “This is totally, totally, totally untrue. There’s nothing to the allegations. I’m just going to continue standing tall.’’

Lantigua inherited a massive deficit that last year required a $35 million bailout from the state. When asked why he couldn’t use some of that money to hire police officers — police say serious crime such as robberies, assaults, rapes, and car thefts have risen by 50 percent in the past year — he said $24.5 million went to pay debts from last fiscal year.

In the past year, the city has reduced the number of police officers from 151 to 111, forcing the department to disband units such as the antigang squad.

Lantigua said the city has been able to spend only $3.5 million of the state bailout money this fiscal year. “I have the utmost respect for police officers,’’ he said, “but the money’s not there.’’

He said he is doing the best he can, despite difficult times. “We haven’t done all we want,’’ he said. “But we have a lack of resources, and we’re limited in what we can do.’’

That has not been enough for Washington Lirano, 26, a lifelong resident of Lawrence, a 7.42-square-mile city on the Merrimack River, 26 miles north of Boston and bordered by Methuen, Andover, and North Andover.

“We need some light at the end of the tunnel,’’ Lirano said as he walked through the historic downtown, where the brick buildings reflect the bygone grandeur of a city once celebrated for its textile and clothing industry. “The mayor really needs to push it up a notch. We’re hurting.’’

Mike Mell, 30, who has also spent his life in Lawrence, sees the city as getting “worse and worse.’’

“It’s really a joke now,’’ he said. “What the mayor has been up to hasn’t helped. He should be for the poor and law-abiding. I’m not getting that from what I’ve read about him.’’

Other residents interviewed yesterday said they remained hopeful that things could improve in this city of 76,000 residents, most of whom are Latino.

“There’s a lot of work to be done, and I hope the mayor is learning on the job,’’ said David Margarin, 30, who has lived in Lawrence since he was a child. “It takes time for things to get better.’’

Natalia Dones, 26, who has also lived in the city since she was a child, said she worried that Lawrence won’t change.