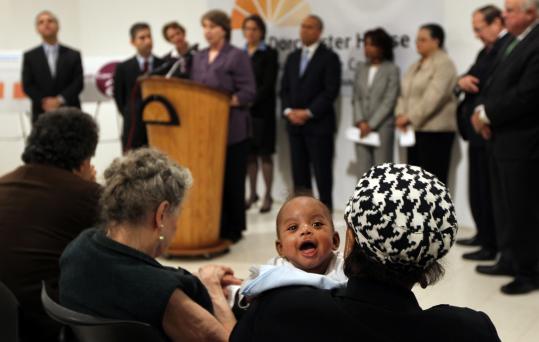 Iowa Democrats are doing it to tweak Mitt Romney. So are New Hampshire Democrats and Massachusetts Democrats, who are even rolling out a “Thank you Mitt Romney’’ sheet cake today.

But not Governor Deval Patrick. When he praises Romney, his Republican predecessor, for signing the state’s universal health care law five years ago today, Patrick insists he is above all that political gimmickry. Really.

“I take every opportunity to compliment him, and I am not doing that with tongue in cheek,’’ Patrick said yesterday, after hailing Romney’s role during a celebration marking the anniversary.

The anniversary has become political fodder, but the occasion is also prompting reflection on the law’s successes and shortcomings.

Signed by Romney in 2006, the measure requires most Massachusetts adults who can afford health insurance to have coverage for the entire year or pay a penalty in their tax returns. That mandate, and the fact that the law helped inspire President Obama’s health care overhaul, has become a sore point for Romney as he moves toward a run for president. To win, he needs to court Republican voters who see the federal law as an unconstitutional government intrusion into private affairs.

Most policy specialists agree that the state law succeeded in greatly expanding health coverage. About 90 percent of Massachusetts residents had coverage before Romney signed the law, and about 98 percent of residents do now, more than in any other state.

But the law did little to rein in soaring costs. Health insurance is more expensive in Massachusetts than just about anywhere in the country, though analysts say that is not because of the law, but because of the state’s high cost of living.

Public support for the Massachusetts law has been strong. A September 2009 poll by the Harvard School of Public Health and The Boston Globe found that residents supported the law by a 2-to-1 ratio. About 59 percent of those surveyed said they favored the initiative, though that was down from 69 percent a year earlier.

The 2009 poll reflected a gnawing concern over rising health care costs and suggested that support could erode further if the state failed to slow the growth of medical spending.

A Suffolk University poll released last week found that 38 percent of voters agreed with the statement that “health care in Massachusetts is working,’’ compared with 49 percent who disagreed. But Robert Blendon, the Harvard pollster and a professor of health policy and political analysis, said the question posed in the Suffolk poll was too vague to accurately measure residents’ opinions about the health care law.

“I would be surprised if a majority of those polled didn’t support the bill,’’ he said. “We had four straight years of polls with people supporting it, and it would be surprising if that suddenly went away.’’

Patrick has made controlling costs a priority for his second term.

Yesterday, he helped lead a birthday celebration for the law at the Dorchester House Multi-Service Center. He was joined by health care advocates including Senate President Therese Murray; Richard Lord, chief executive of Associated Industries of Massachusetts; Gary Gottlieb, president of Partners HealthCare; and others.

Addressing the crowd, Patrick said he tells audiences across the country that he admires the way Romney worked with a Democratic Legislature and a wide range of interested parties to make the law a reality. “I am proud that we are the kind of Commonwealth that values health as a public good,’’ the governor said, sparking applause.

Afterward, he blew out five candles on a cake decorated with the message, “Happy 5th Birthday Massachusetts Health Reform.’’ Patrick handed the first slice to Madelyn Rhenisch, who was the first resident to enroll in a program created by the law.

Patrick, who is preparing for his own role as a spokesman for Obama’s reelection campaign, then answered questions from reporters about the law’s ramifications for Romney.

The governor, who denounced Republicans for using the “gimmick du jour’’ against him during his recent reelection campaign, bellowed with laughter about the “Thank you Mitt Romney’’ sheet cake his party is preparing.

The cake punctuates a campaign that has lasted months, with top Democrats from White House adviser David Axelrod on down showering Romney with unwelcome praise for signing the law. “I think it’s actually pretty funny,’’ Patrick said

“I think government ought to be about helping people, and this has helped a whole lot of people,’’ he added. “There’s nothing cynical about my being here to celebrate the fifth-year anniversary of health care reform, and you’ve heard me brag about it before.’’

Patrick added that he wished Romney could have been at the celebration in Dorchester.

“I would suggest they focus on jobs,’’ Fehrnstrom’s statement said. “It doesn’t look good for Democrats to be sitting around eating cake and congratulating themselves while 14 million unemployed Americans are struggling to find work and put food on the table.’’

As it turns out, Romney was at the University of New Hampshire, taping a message to his supporters announcing that he was launching a presidential exploratory committee. Romney’s video highlights his work as governor in balancing the budget and streamlining government, but does not mention health care.