Obama says progress made, but still no deal; frustration, confusion rife in capital, beyond 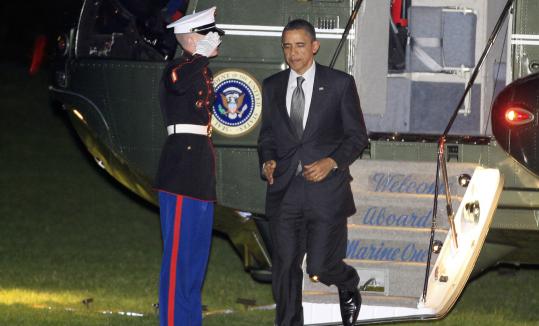 President Obama returned to the White House yesterday for a meeting with John Boehner and Harry Reid regarding the budget. (Charles Dharapak/ Associated Press)
By Mark Arsenault and Theo Emery Globe Staff / April 7, 2011

WASHINGTON — President Obama and congressional leaders worked into the night yesterday to forge a last-minute consensus on budget cuts that would keep the government running through September and avert a threatened partial shutdown at midnight tomorrow.

The president invited Senate majority leader Harry Reid and House Speaker John Boehner to join him at the White House last night in yet another attempt to surmount contentious and politically fraught issues over just how deep the budget cuts should be. Emerging more than an hour later, Obama said the meeting helped to narrow the issues, but there was no deal yet.

As the principals met, frustration and confusion mounted — on Capitol Hill and along Main Streets across the country — over just how disruptive a partial government shutdown could be.

Information on which services would be halted or curtailed, and which workers would face furloughs, has been too scant and too vague, federal unions and officials in Massachusetts say.

The government did divulge that about 800,000 federal workers — about 28 percent of the nonmilitary work force — would be furloughed. But many employees are still waiting for their agencies to determine which workers are considered “essential’’ workers and thus exempt.

As their senators and representatives swap accusations over which side is to blame for the impasse, private contractors working on federal programs are bracing to be locked out of their work sites. And state and local officials were peppering their federal counterparts with questions on the shutdown’s effects on specific federal grants, research programs, and monitoring of environmental hazards, such as radioactivity from the nuclear disaster in Japan.

“This is no way to run a country,’’ said David Borer, general counsel for the American Federation of Government Employees, a union representing about 600,000 federal workers. The union is suing Obama’s administration to get access to shutdown plans for federal agencies.

For those responsible for helping the poor and senior citizens in communities across the Commonwealth, a sense of anxiety has set in. John J. Drew, president of Action for Boston Community Development, called it reprehensible that the social service agency may lose federal funding for many programs. The agency could be forced to close homeless shelters and send home toddlers from Head Start if a shutdown lasted longer than a couple of days, he said.

“We have no instructions from anybody — nobody’s sending us a thing that says you’ve got to be prepared to do this or that; we just don’t have any instructions,’’ Drew said. “We’re left on our own out here.’’

New Bedford’s mayor, Scott W. Lang, said the lack of information was unsettling and predicted that a federal shutdown could have ripples that could eventually stall major construction projects, such as road and airport projects. Federal workers whom city agencies depend upon won’t be able to answer questions and provide approvals, slowing or halting everything that has a federal component, he said.

“We are a mature, serious democracy, a world power,’’ he said. “We ought to look that way and come to an agreement that keeps government open.’’

Though other Massachusetts officials said the state would be able to keep some social service programs afloat, Patrick cast doubt on the ability to do so for a prolonged period. “We don’t have a lot of cash lying around as you know, so the best thing for us is to have the government stay open and continue to function and to fund the programs, particularly that are most important to vulnerable people,’’ said Patrick, who has been stepping up his public statements in support of Obama as the president’s reelection campaign begins.

Still, the state will be able to use its own cash to cover expenses for Medicaid recipients, families who qualify for cash assistance, and other federal social safety net programs, said Alex Zaroulis, spokeswoman for the executive office for administration and finance. Zaroulis said the federal government has told the state it would be reimbursed for expenses related to programs for those with the “most dire need,’’ she said.

The last shutdown, dating back to budget fights between President Clinton and then-Speaker Newt Gingrich, closed the federal government for three weeks in the winter of 1995-96.

There were some signs of progress yesterday on Capitol Hill over an attempt to avoid a shutdown. Reid, in a floor speech, reported that the negotiators “had a lot of success.’’

But there were also the usual political barbs. Boehner accused the president of failing to lead in the budget negotiations. And Reid said Republicans were stalling and procrastinating by proposing another short-term stopgap to fund the government.

“It’s time for my friends in the House of Representatives to stop campaigning and start governing,’’ Reid said.

At issue are competing visions over how much to cut in discretionary domestic spending in the next few months. Republicans, prodded by freshman representatives who won their seats with help from Tea Party activists, seek $61 billion in cuts. They had also attached provisions to their House bill that separately sought the end of federal funding of Planned Parenthood clinics and public broadcasting and banned the Environmental Protection Agency from regulating greenhouse gas emissions.

Democrats have agreed to about $10 billion in cuts. Entitlement programs such as Medicaid and Medicare would not be affected in this round of cuts.

The Obama administration warned yesterday that a shutdown would threaten the recovery of the nation’s economy.

Small businesses would not be able to get federal loans, and the Federal Housing Administration would be unable to provide loan guarantees for new loans at the start of the spring home-buying season. That would hurt the housing market, according to senior administration officials who declined to be identified.

The Internal Revenue Service would still collect checks owed to the US Treasury, but they won’t have enough staff to process refunds for taxpayers filing returns on paper, officials said.

Members of the US military would continue to earn their salaries during a shutdown, but won’t receive paychecks until the Congress appropriates the money to pay the troops. A shutdown would also shutter 394 national parks covering 84 million acres of public land, including the Lowell National Historical Park, the John F. Kennedy birthplace in Brookline, and the Longfellow House in Cambridge.

Nationally, the loss of about 800,000 daily park visitors would cost parks and neighboring communities $32 million in lost revenue each day of a shutdown, said David Barna, National Parks spokesman, in an interview.

To help cities and towns prepare, US Senator John F. Kerry, the Massachusetts Democrat, has scheduled a conference call today with Bay State mayors. State and local governments may have to do more to help constituents while the federal government is operating with a greatly reduced staff, according to a statement from Kerry’s office.