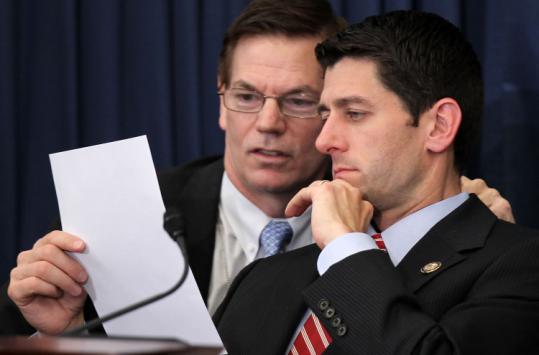 WASHINGTON — Partisan divisions hardened yesterday as Republicans began pushing a $3.5 trillion 2012 federal budget through a House committee, with backers calling it a sobering correction for the nation’s spending binge and critics labeling it an assault on health programs for retirees and the poor.

The sweeping fiscal plan by House Budget Committee chairman Paul Ryan, Republican of Wisconsin, lays the groundwork for a decade of cuts in spending, taxes, and deficits. It would shift costs to future retirees and features a reshaping of the government’s two chief health care programs for the elderly and poor, Medicare and Medicaid.

Though the blueprint covers the entire reach of government, much of yesterday’s House Budget Committee debate focused on health and other social programs. Republicans propose wringing hundreds of billions in savings over the next 10 years. Ryan said that with sky-high deficits, the government needs to limit its mission to programs that are truly needed.

“We don’t want to turn the safety net into a hammock that lulls people to lives of complacencies and dependencies, into a permanent condition where they never get on their feet,’’ he said.

Representative Chris Van Hollen of Maryland, the panel’s top Democrat, said Republicans are protecting tax breaks for corporations and the wealthy at the expense of the middle class and the poor. The GOP budget proposes whittling the current 35 percent top tax rate on individuals and businesses to 25 percent.

“It doesn’t reform Medicare, it deforms and dismantles it,’’ Van Hollen said of the GOP’s budget. As for Medicaid, the budget “rips apart the safety net’’ for poor and older people, he said.

The budget is a nonbinding road map whose taxing and spending changes are supposed to be enacted later in the year in future legislation. But Ryan’s plan has no chance of being approved by the Democratic-run Senate, making it more of a statement of priorities that candidates are likely to embrace or attack during the 2012 campaigns.

As committee debate extended into the afternoon, Republicans batted down a parade of Democratic amendments that, like the budget itself, were designed to underscore political points. By party-line votes, the panel rejected one amendment blocking tax cuts for millionaires and another rejecting reductions in Medicaid benefits for elderly nursing home residents.

If it does not work, as an analysis by the nonpartisan Congressional Budget Office suggests might happen, future Medicare beneficiaries, providers, and states will feel the pain directly. That could send them right back to Washington clamoring for more subsidies.

Medicare would remain largely unchanged for people now 55 and older. Starting in 2022, new retirees would get fixed amounts of money from the government to buy private insurance. The sick would get more money than others, the wealthy less.

But the budget office analysis said future retirees will pay considerably more for health care under Ryan’s approach. That is because the Medicare benefits package would be more expensive to deliver through private insurance companies, which pay doctors and hospitals more than the government and have higher overhead costs.

By 2030, the government payment would cover only about one-third of the typical retiree’s total health care costs, the budget office said.

Ryan also would gradually raise the current Medicare eligibility age of 65 to 67 by 2033. And he would revive the “doughnut hole’’ gap in Medicare prescription drug coverage that last year’s health care law eliminated, the budget office said.

Medicaid, the federal-state program that covers low-income and severely disabled people, would be converted into a block grant program, giving each state a lump sum to design its own insurance plans. The poor would no longer, under federal law, have a right to health care.