Urges chance for citizenship for all 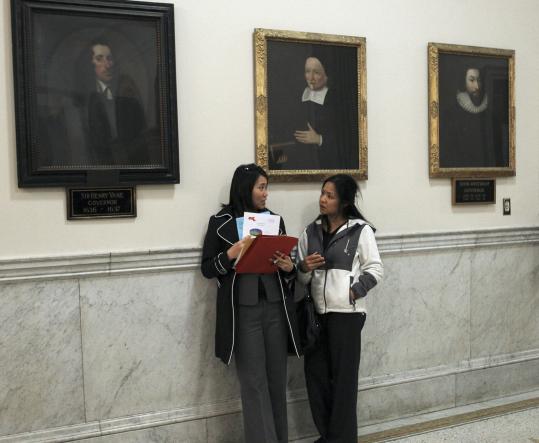 Urging minority groups to unite and assert their influence on policy makers in Massachusetts and across the country, the head of a prominent interfaith group quoted Scripture and drew cheers at a State House rally yesterday.

“When William Bradford and the Mayflower pilgrims arrived at Plymouth Rock in 1620, they did not bring any immigration papers,’’ said the Rev. Hurmon Hamilton, president of the Greater Boston Interfaith Organization. “When John Winthrop arrived in 1630 with the next wave of New Englanders . . . they were not met with a wall built to keep them out.

Hamilton, calling for a “pathway to citizenship’’ for illegal immigrants in the United States, offered the keynote remarks during the 15th annual Immigrants’ Day at the State House. He pounded the lectern and raised his voice as he equated today’s climate on immigration issues to the biblical story of the good Samaritan, who rescued a man who had “fallen among thieves.’’

“You have recently fallen among thieves,’’ he told the crowd. “Some of them are Republicans, and some of them are Democrats on Capitol Hill. I say that the rest of us, African-Americans and all the rest of us have to be, for you, your good Samaritans. If we do not stop, what will happen not only to you but what will happen to our country? We need your diversity. We need your capacity to help us to compete. We need you, not just the other way around.’’

Hamilton’s call found a receptive audience that included Senator Sonia Chang-Diaz, Democrat of Jamaica Plain, and Representative James J. O’Day, Democrat of West Boylston, who spoke in support of programs for immigrants, like English as a second language courses and programs to prevent domestic violence.

Last year, lawmakers in the House narrowly rejected plans to implement more stringent identity checks for people seeking state services, a plan opposed as discriminatory by immigrant groups, but backed by lawmakers who argued that services were being abused by ineligible people. The Senate passed an even more sweeping plan that would impose sanctions on employers who hire illegal workers, but the proposal was scrapped.