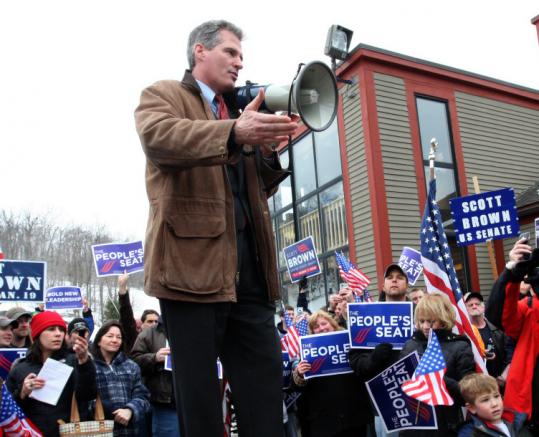 Few Republicans last year were as effective at tapping into the labor vote as Brown, whose barn jacket and pickup truck helped him solidify an image as a common man taking on entrenched interests. Brown and union chiefs alike have credited the support of Reagan Democrats, working-class voters who swung his way, with his special election victory in January 2010.

Now, Democratic and union leaders around the country are hoping to energize the labor base for the next election by rallying against antiunion legislation in industrialized Midwestern states. Brown will be a key target of these efforts, say Massachusetts organizers, even as they acknowledge that their campaign machinery failed in his 2010 victory.

The difference this time around is that Brown has voted against several bills that Democrats considered important to workers, including an extension of jobless benefits and a summer jobs program for youths. Brown said he did not want to add to the deficit with those programs and argued instead that job growth is best generated through limiting taxes and regulations on businesses. Union leaders plan to use these votes against him in advertising campaigns and protests.

“A lot of blue-collar workers accepted the fact that he was their champion,’’ said Robert J. Haynes, president of the Massachusetts AFL-CIO. “But his votes have not been good for working people in a whole host of areas . . . When I go tell everybody this, it’s going to have meaning to people who were laid off.’’

Democrats face big challenges against Brown, and union leaders concede they face an uphill climb. No Democrat with a high profile has yet expressed a strong interest in running against him. He is amassing a large war chest — $7.2 million to start this year. And a Globe poll last year found that he was the most popular politician in the state. He recently published an autobiography that describes a hardscrabble childhood punctuated by violence and poverty, a personal story that would make it difficult to portray him as a defender of wealthy interests.

“Union rank and file voted for Scott Brown in the last election and continue to support him today because they see in Scott a regular guy who is just like them,’’ said Eric Fehrnstrom, one of Brown’s top campaign strategists. “He’s honest, hardworking, and his main focus is on creating jobs and putting people back to work.’’

Union members made up about 14.5 percent of the Massachusetts workforce last year, an all-time low, according to the Bureau of Labor Statistics. The percentage was 11.9 percent nationally. About half of the AFL-CIO membership in Massachusetts supported Brown over his Democratic opponent, Attorney General Martha Coakley. That compares with about 70 percent who voted for President Obama in 2008, Haynes said.

“Senator Brown has done a very clever job — the way he’s positioned himself, where he shows up. He’s got some smart people around him,’’ said Rich Rogers, executive secretary of the Greater Boston Labor Council. “But his votes, they defy his image.’’

The first vote Brown cast, in February 2010, was to block Obama’s appointment of a union lawyer, Craig Becker, to the National Labor Relations Board, which certifies unions and resolves disputes between workers and employers.

A few months later, he helped block funding for summer jobs — which would have provided nearly 7,000 youth jobs in Massachusetts — saying he didn’t want to add to the deficit (he filed separate legislation that would have paid for the additional spending with cuts to other areas and unspent stimulus money).

Several times last year, Brown blocked votes that would have extended unemployment benefits for the longtime jobless, a series of votes that union leaders are planning to emphasize.

Brown, who declined to be interviewed, has said he voted against extending unemployment benefits because he wanted the costs to be offset with budget cuts so the measure would not add to the deficit. (He filed legislation that would have accomplished that, but it never gained traction.) The unemployment extension was later approved — with Brown’s support — as part of a broader tax compromise package in last year’s lame-duck congressional session.

An emerging coalition involving labor unions as well as community and religious groups recently started meeting to figure out how to change the largely positive image Brown has with voters. The group is considering strategies to try to convert the anger that rank-and-file union workers feel toward what is happening in Wisconsin into anger over votes that Brown has cast in Washington, according to Veronica Turner, the executive vice president of SEIU Local 1199.

“People are getting together and connecting the dots between the illegal challenge to workers’ rights in Wisconsin, corporate tax breaks, [and] cuts to public services,’’ Turner said.

Like many prominent Republicans, Brown has voiced support for Governor Scott Walkerof Wisconsin, who pushed forward a law that would strip most collective bargaining rights from public workers’ unions.

Critics of the law, which is being challenged in court, say it unfairly targets a long-recognized right of unions. Supporters say it is a necessary step to close budget gaps and rein in generous union contracts.

Yet in a speech last month at the Ronald Reagan Presidential Library in California, Brown credited his rise to the Bay State’s Reagan Democrats, many of whom are union members.

They “are still a mighty force in my state and across this great country, otherwise I would not be here as the proud successor to the late Senator Ted Kennedy,’’ he said in the speech.

Just as opposition to health care legislation and the stimulus spending package helped fuel the Tea Party movement in the last election, Democrats across the country think that antiunion legislation in places like Wisconsin, Ohio, and Indiana will galvanize their forces in the next one.

“President Obama should send the Republican Party a big thank-you note,’’ said David B. Cohen, a political science professor at the University of Akron. “Republican governors and state legislatures have done the impossible: woken a slumbering Democratic base, one that slept through the 2010 midterm elections.’’

Obama has had a tenuous relationship with top labor leaders, and he has been viewed with skepticism by the rank and file. He has not made one of their top issues — allowing unions to organize without secret balloting — a high priority. He also agreed to tax breaks for the rich as part of last year’s tax-cutting compromise, and has recently adopted a more corporate-friendly tone as he has shifted to the political center.

There is some evidence of the labor pendulum swinging toward Democrats. In Wisconsin, the head of the state troopers union said in a statement that he regretted endorsing Walker’s campaign last year.

“They don’t want to hurt us, they want to take us out of the ballgame,’’ Lee A. Saunders, the secretary-treasurer of the American Federation of State, County and Municipal Employees, said in an interview. “You have an effort underway where organizations are meeting and talking, much more than usual, and coordinating activities . . . in preparation for 2012.’’

Republicans say independent voters are fed up with expensive collective bargaining contacts for government employees that add to the tax burden.

“There’s kind of been labor peace for three decades,’’ said Chris Edwards, an economist at the Cato Institute who opposes collective bargaining for public sector employees. “I think that’s partly because state budgets until now have been able to handle the costs of the contracts. But we’re kind of at a breaking point.’’

Polls indicate voters have potentially conflicting priorities when it comes to government unions. An NBC-Wall Street Journal poll released earlier this month found that 62 percent said it was unacceptable to limit collective bargaining. But 68 percent said public employees should be required to pay more for their retirement benefits.

And the power of unions to influence the outcome of elections has significant limitations, especially in a wave election like 2010. In Wisconsin, for example, the percentage of the electorate from union households was 26 percent in both the 2008 presidential election and the 2010 midterm election, according to exit polls. Yet the two elections had very different results: Obama won by 14 points, but two years later Senator Russ Feingold, a three-term Democratic incumbent, lost by 15 points.