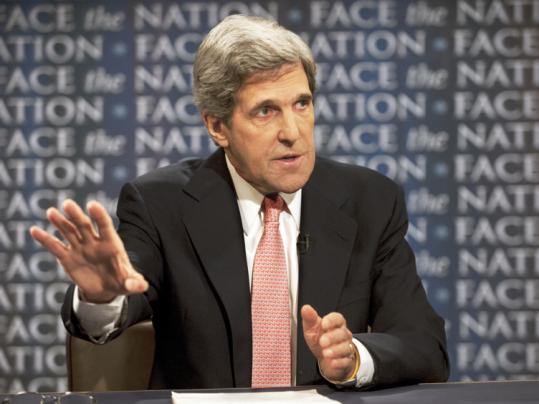 Senator John Kerry’s call yesterday echoed one he made previously in an appearance on CBS’s “Face The Nation.’’ (CBS)
By Mark Arsenault Globe Staff / March 17, 2011

Khadafy has used his air force to strike against the rebels trying to overthrow him.

“The international community cannot simply watch from the sidelines as this quest for democracy is met with raw violence,’’ said Kerry, chairman of the Foreign Relations Committee, in his strongest public comments on the subject to date.

He said the Arab League’s endorsement last weekend of a no-fly zone over Libya is unprecedented, and the UN should act urgently to head off a possible humanitarian disaster.

“The Security Council should act now, in my judgment, to heed the Arab League’s call,’’ said Kerry, in a speech to a room packed with foreign journalists at the Carnegie Endowment for International Peace, a think tank in Washington.

Kerry’s high-profile statements in the national debate on Libya came as Secretary of State Hillary Clinton acknowledged in a CNN interview that she would not serve another term if Obama is reelected in 2012. With his lengthy foreign policy experience, Kerry has long been considered by pundits a potential Cabinet pick for Obama, whom Kerry strongly supported early in his presidential candidacy.

Does Kerry want to be secretary of state?

“No,’’ said the senator’s spokeswoman, Whitney Smith, in a one-word answer by e-mail.

Kerry’s call for stronger action on a no-fly zone has put him at odds with Defense Secretary Robert Gates, who has said attacking Libya’s planes and air defenses would be an act of war.

Senator Scott Brown, the Massachusetts Republican, has also urged a cautious course in Libya. “Once we make that commitment, we’re there for a long, long time,’’ Brown said last week. His office said last night that the senator would stand by his earlier comments.

As Khadafy’s forces appear to have gained the momentum against the opposition, key Republicans have criticized the Obama administration for failing to push more aggressively to support the rebellion. Senator Lindsey Graham, a South Carolina Republican, said this week that the British and French governments support a no-fly zone. “At least be as bold as the French,’’ Graham urged the administration.

The administration this week has defended its deliberate approach on the issue and attempts to build international consensus before acting. It is considering other tactics to pressure Khadafy and aid the opposition, such as giving some $32 billion in frozen Libyan government assets to the rebels. A no-fly zone “is certainly being considered as part of a package of actions that might be taken in a resolution that emerges from the Security Council,’’ White House press secretary Jay Carney said yesterday.

Kerry’s speech was the second highly public effort by the senator to urge the administration to take a tougher path. Kerry made an initial case for the United States and its allies to draw up plans for a no-fly zone on the program “Face the Nation’’ 10 days ago. He will chair a Senate hearing today on the uprisings in the Middle East and the implications for US policy.

Kerry warned yesterday that time is running short for the international community to affect the struggle in Libya, but that even if Khadafy were to defeat his opponents on the battlefield, his legitimacy as a head of state is gone.

“The will of the people of Libya will ultimately prevail,’’ said Kerry, who added that a Khadafy military victory would not end a push for democracy in the Middle East, driven by a new generation of youth demanding self-rule. “You just can’t stomp on the legitimate aspirations of young people,’’ said Kerry.

The United States should further encourage the “Arab awakening’’ with money to support the mostly peaceful revolutions in Egypt and Tunisia, said Kerry, who compared regime changes in those countries to the fall of the Berlin Wall.

“This is not our revolution, but I’ll tell you, our involvement can still make an enormous difference,’’ Kerry said.

He is drafting legislation with Senators John McCain of Arizona, a Republican, and Joe Lieberman of Connecticut, an independent, to create two funds to provide some $40 million to $50 million to Egypt and $10 million to $20 million to Tunisia to help make capital available to businesses, similar to programs the United States initiated in Eastern Europe after the fall of the Berlin Wall, he said. The legislation should be ready to file within a month.

“I know that we face a budget crisis in our own country, but let me tell you something — democracy assistance is an investment, not a gift,’’ said Kerry. “We can either pay now to help brave people build a better future for themselves, which we have promised them and talked about for years, or we will certainly pay later with increased threats to our own national security.’’