But good contacts made, officials say 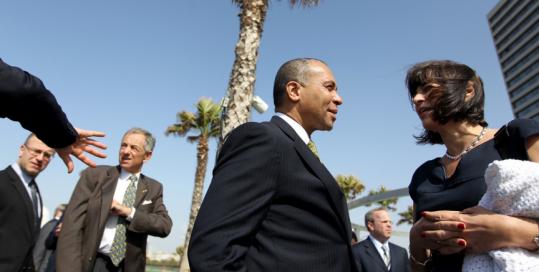 JERUSALEM — Governor Deval Patrick, who had justified his ongoing 10-day international trade mission as a jobs trip, came away from the first leg in Israel without any new deals to announce. Instead, aides and business leaders who attended the trip pointed to more nebulous achievements: stronger personal relationships and some potential business deals.

After a week in Israel, Patrick began the second leg of the trip yesterday, heading to the United Kingdom, where he met with government and business leaders. Many of the business people who went to Israel with Patrick returned home to Massachusetts, while others joined him for the second leg.

Patrick acknowledged it will take time to strike deals.

“If we don’t have good follow-up, we’re not going to close on some of the opportunities that we have,’’ Patrick said during a wrap-up session Friday at the David Citadel Hotel in Jerusalem. “And we have a lot of opportunities.’’

As Patrick spoke to Israeli business leaders, he said his mission was not to sign deals to send “widgets’’ back and forth. Instead, he said, it was about making connections that would yield new ideas and collaborations, sparking business opportunities that would help both economies.

Gregory Bialecki, Patrick’s economic development chief, said Israel did not strike him initially as an obvious choice for a trade mission, unlike the trip to China taken during the first term.

“But I get it now,’’ he said Friday, pointing to the country’s innovation-oriented economy.

Judging the ultimate value of the excursion, which will cost $300,000 in public money, will be difficult. Even if deals are reached, it will be hard to determine whether many of them were won during meetings and business round-tables on the trip. It may take years — and many more contacts — for some deals to hatch, according to executives who accompanied Patrick.

“Everybody will say it’s successful, and that’s the difficulty of anyone trying to verify it,’’ said Jock O’Connell, a Sacramento, Calif.-based trade consultant who is not part of the Massachusetts mission. “It’s the nature of anything that takes time to come to fruition.’’

Patrick’s higher profile meetings with top Israeli government officials, including Prime Minister Benjamin Netanyahu, tended to draw the most notice. But Massachusetts business people who went with him also spent time with counterparts from dozens of Israeli companies, and those encounters have far more practical value than “a 15-minute meeting with a prime minister for a photo op,’’ said O’Connell, who has extensive experience in state trade organizations in California.

Patrick and the local business delegation met with leaders of Israeli companies in biotechnology, information technology, clean technology, and real estate — sectors prominent in the economies of both regions. Many of the Israelis who attended had experience either studying at Massachusetts universities or working in the state. The Massachusetts business leaders on the trip also gained valuable access to Patrick himself.

Israeli start-ups often seek a US headquarters to manufacture and market their products in North America, and many Israelis who attended the forums asked pointed questions about whether Massachusetts offered advantages over Silicon Valley. Patrick and other members of the delegation defended the state, citing its more favorable time zone, its higher education system, and available financial incentives such as tax breaks, particularly in biotech.

Most business delegates at Friday’s wrap-up session were gushing about the similarities between Israel’s and Massachusetts’ technology-based economies, but they acknowledged the trip’s success will depend on follow-up activity. A few had set up meetings with Israelis back in the states.

One of Patrick’s economic development officials, Charlie Yellen, was staying behind this week to hire an Israeli staffer for the state’s trade office there, which has been dormant for several years. Members of Patrick’s staff were working with the delegates to set up online communications and other activities to better organize the follow-up.

owner Robert Kraft, who has been doing business in Israel for decades, told his fellow delegates that they had planted seeds that in some cases could take 10 to 15 years to mature.

He said the trip was essential to understanding the local culture, and to building trust with potential Israeli business partners. Doing business in Israel is rewarding, complicated, and requires much more work, he said.

“Life is about execution. You always get people who are fancy talkers,’’ Kraft told the group, adding, “You can’t meet your payroll with chit-chat.’’

John Fish, president of Suffolk Construction Co., had a similar message. “We in the business community have to respond, to execute when we get done,’’ Fish said at the wrap-up session.

Fish said he planned to donate scholarships to students from Technion University, dubbed the “Israeli MIT,’’ in hopes of building a working relationship with some of the nation’s top scholars.

Patrick had announced a agreement Thursday with the Israeli government to invest in joint start-up projects between US and Israeli companies. Of the 17 US governors who have visited Israel since 2008, seven have signed such agreements.

At least two companies on the trip said they were closing in on potential deals.

Michael Greeley, a venture capitalist with Flybridge Capital Partners, said representatives from two Israeli start-ups, whom he met on the trip, were meeting with him in Boston next month and that he is “very seriously’’ looking at investing with them.

Praveen Tipirneni, vice president for business development of in Lexington, said he may have a deal to announce soon. Cubist general counsel Tamara Joseph said the deal will only work if it makes financial sense for both parties. The sides had been speaking to each other for some time, but a three-hour meeting Thursday was very productive, she said.