THIS STORY HAS BEEN FORMATTED FOR EASY PRINTING
ISRAEL JOURNAL 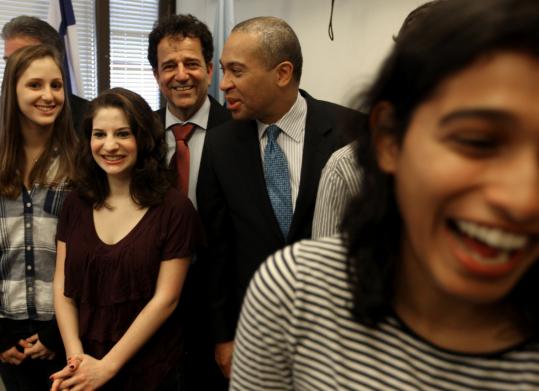 JERUSALEM — Governor Deval Patrick was acknowledged yesterday from the floor of the Knesset, the Israeli Parliament, before meeting with top Israeli officials, including Prime Minister Benjamin Netanyahu.

Accompanying him on that leg of the visit were Suffolk Construction chief John Fish, several members of his Cabinet, and the most popular member of his entourage, Robert Kraft, the owner of the .

Kraft was being followed by a camera crew for an NFL story.

When Danny Ayalon, the deputy foreign minister, read a proclamation welcoming Patrick and the delegation to Israel, he made sure to mention “my very good friend, Robert ‘Bobby’ Kraft.’’

Patrick agreed. “It’s amazing to be acknowledged from the floor of the Knesset,’’ he said.

During the part of the meeting with Ayalon that was open to the press, Patrick reiterated the key economic themes he has been drumming through this trade mission to Israel.

“We’ve covered a lot of ground in every sense of that term,’’ Patrick told Ayalon.

He said he told the deputy foreign minister that the business relationship between Massachusetts and Israel was already strong, but he added, “the more the better.’’

Most of those gatherings were closed to the press.

Special message makes its way to Western Wall
HAIFA, Israel — As Governor Deval Patrick’s trade mission moved to Jerusalem, many delegates from Massachusetts contemplated what notes they wanted to bring when the group traveled to the Western Wall.

It’s one of the holiest sites in the world. Helene Solomon, CEO of Solomon McCown, a public relations firm in Boston, said she planned to bring a special blessing from the man who works at the garage where she parks her car in Boston.

He is an Ethiopian immigrant, part of one of the world’s most interesting and historic Jewish communities. He was thrilled that Solomon was traveling to Israel, home of many Ethiopian Jews, with the governor, she said.

His own father had been an orthodox Jew, he told Solomon, and passed away three months ago.

The note is a message for him, Solomon said.

Key associates accompany Patrick
HAIFA, Israel — Who’s the bald guy standing next to Governor Deval Patrick in all the pictures and videos from Israel?

There are two of them actually, a pair of key handlers for the governor’s maiden voyage to the Holy Land.

Shai Bazak is the 43-year-old consul general of Israel in charge of New England. He’s often whispering into Patrick’s ear, coaching him on the background of the people he’s about to meet, pulling him aside for a quick history lesson, or directing him to a good cup of coffee.

Bazak is veteran of the Israeli government. He’s served as a spokesman for Benjamin Netanyahu when he led the opposition party, as well as during his first term as prime minister from 1994 through 1998.

(Before that, he was a sharpshooter and commander in special units of the army.)

Bazak then went to Miami as the youngest consul general in Israel’s history. He took Florida Governor Jeb Bush and Puerto Rican Governor Pedro Rossello on separate missions to his country just over a decade ago.

A charmer in two languages, Bazak loves to joke with the business delegates and the press.

And he loves it even more when his picture is in the paper or on television.

He came to Boston four months ago and lives in Brookline, which is home to many Israelis. Bazak has 2-year-old twin girls, whose videos he pulls up often on his iPhone.

The other bald companion is Alex Goldstein, 26, who was Patrick’s campaign spokesman and became his gubernatorial press secretary at the beginning of his second term in January. Goldstein grew up in Newton and attended Brandeis.