No deals at the outset of five-day mission 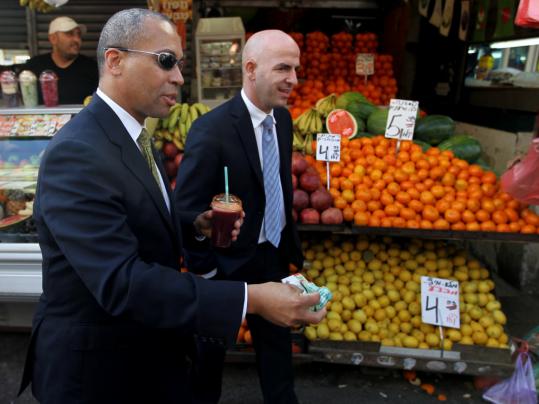 TEL AVIV — Governor Deval Patrick stepped off an airplane at 2 a.m. Boston time yesterday, traded his travel casuals for a business suit, and dashed into his first meeting, where he pleaded with the chief of El Al Airlines to initiate direct flights to Logan International Airport.

The response from El Al was polite — and noncommittal. But there was little time for Patrick to reflect before the next stop: lunch and a security briefing by the US Embassy.

On the first day of his five-day trade mission to Israel, the governor led an entourage of Massachusetts business executives through back-to-back meetings with Israeli officials, rarely taking a break. Much of his time was spent in small boardrooms, discussing business opportunities and similarities between Massachusetts’ and Israel’s economies.

There was pageantry, too, as Patrick and the delegation engaged in repeated sessions of gift exchanging and slide-show watching amid large platters of food.

At one point, the governor managed to slip out for a 20-minute walk in an outdoor market, where he sipped fresh pomegranate juice and admired Tel Aviv’s Bauhaus architecture.

Patrick’s trade mission — his first trip to Israel — kicks off a second term in which he has promised to travel more often, part of an overall push to raise his profile both nationally and around the world. This trip has a fairly broad agenda, to promote investment between Israel and Massachusetts in clean energy, information technology, and biotechnology.

By day’s end yesterday, the governor was tired but enthusiastic about what he called a new way of economic thinking that depends on collaboration among entrepreneurs.

“It doesn’t turn into a deal right away,’’ Patrick said during an afternoon reception at a office in Netanya, near Tel Aviv. “But the relationship builds on something and jobs get created that way in this new innovation economy. And we’ve got to be in that space.’’

The delegates traveling with Patrick — a mostly male group who numbered more than 30 — seemed pleased with the meetings so far, even if most conceded that they had no immediate business prospects.

Mark Shirman, president and CEO of GlassHouse Technologies, a Framingham company with more than 160 employees in Israel, said the two regions share much when it comes to innovation. “It’s real,’’ said Shirman, who travels to Israel several times a year. “I get to live it.’’

Underscoring the ties between the two economies, several of those whom the delegates met yesterday, including the country’s chief scientist, had spent time in Massachusetts, either at a university or in businesses.

While in Israel, the Patrick administration will try to build support with planned announcements, including one on Thursday to sign an economic development agreement between the Israeli and Massachusetts governments. During his only international trade mission of his first term, to China, Patrick made similar announcements. But he also failed to secure nonstop air service to that country, a high priority on that trip as well.

On Saturday, Patrick and much of the group will travel to Great Britain, where they will spend an additional four days on a second leg of the trip that is expected to focus heavily on tourism and financial service issues.

Until then, Patrick’s schedule is crowded with meetings with top government leaders throughout Israel, an opportunity for him to try out his diplomatic skills on a larger stage. Israel is accustomed to hosting American government leaders and often gives them broad access.

Presidential candidates, including presumed Republican hopeful Mitt Romney, almost always pay a visit to the country, a close US ally with a strong emotional significance to American Jews. Patrick has not said what he plans to do when his second term expires.

But yesterday, the governor, a former corporate lawyer, seemed at ease on a foreign stage. He bantered with Israeli officials and corporate leaders; handed the chief executive of El Al, Major General Eliezer Shkedi, a wooden box crafted by Massachusetts Shakers; and gleefully accepted a Bible embossed with the El Al seal. Then he made his pitch.

“Not one of us came here on El Al,’’ Patrick told Shkedi, the former head of the Israel Air Force, as more than two delegates sat with him around a table laden with fruit, salmon, and Israeli sodas. “So there are opportunities here. I’m not saying this as a scold.’’

Shkedi was receptive to the plea, but equally eager to promote Israel, suggesting that Patrick really needed to visit Tel Aviv’s night life at 3 a.m. to capture the city’s essence.

“That part’s off the record,’’ Patrick quipped.

With typical Israeli frankness, Shkedi told Patrick that the airline cannot afford to make a mistake on a new route, and that Chicago and Miami are higher on the expansion list than Boston.

In response, the Boston delegation, led by owner Robert Kraft, argued that people who travel from Boston to Israel are high-end business customers.

“Those are the people who travel business class. That’s where you get your gelt,’’ Kraft said. The Patriots owner has said he may have to leave the trip early if he is needed for negotiations with the National Football League’s players.

Patrick asked Shkedi to give him until Rosh Hashanah, or about six months, to make the case that Boston, which currently sends only 79 passengers a day to Israel, can generate enough business to make the route profitable.