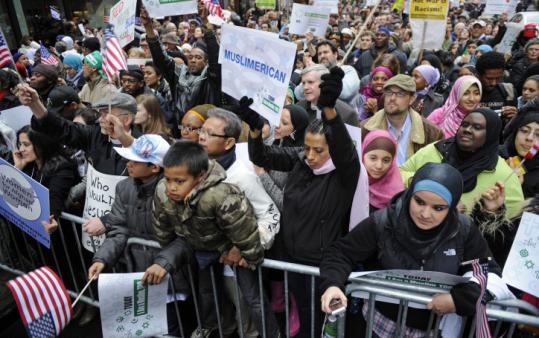 NEW YORK — About 300 people gathered in Times Square yesterday to speak out against a planned congressional hearing on alleged Muslim terrorism, criticizing it as xenophobic and saying that singling out Muslims is unfair.

The rally was organized by a coalition of more than 100 interfaith, nonprofit, and governmental organizations. Some demonstrators carried signs reading, “Today I am a Muslim, too.’’

Feisal Abdul Rauf, the imam who is a cofounder of a planned Islamic center near the World Trade Center site, and hip-hop mogul Russell Simmons were among those who addressed the crowd.

The chairman of the House Homeland Security Committee, Representative Peter King, has said that affiliates of Al Qaeda are radicalizing some American Muslims. King plans hearings starting Thursday on the threat he says they pose.

King, a Republican from Long Island, told CNN’s “State of the Union’’ yesterday that he sees an international movement with elements in the United States of Muslims becoming more radical and identifying with terrorists.

“The overwhelming majority of Muslims are outstanding Americans, but at this stage in our history there’s an effort . . . to radicalize elements within the Muslim community,’’ King said in the interview. “It’s there and that’s where the threat is coming from at this time.’’

“I don’t believe there is sufficient cooperation’’ by American Muslims with law enforcement, King said. “Certainly my dealings with the police in New York and FBI and others say they do not believe they get the same — they do not give the level of cooperation that they need.’’

“American Muslims are as fully American as any other faith community,’’ said Rabbi Marc Schneier, founder of the Foundation for Ethnic Understanding.

Denis McDonough, deputy national security adviser, speaking at an interfaith forum at a mosque in Sterling, Va., commended its members for taking “an unequivocal stand against terrorism.’’

“You’ve sent a message that those who perpetrate such horrific attacks do not represent you or your faith, and that they will not succeed in pitting believers of different faiths against one another,’’ McDonough said.

The administration has tried to strike a balance on the thorny issue, working to go after homegrown Islamic extremists without appearing to be at war with the Muslim world. There has been an effort to build stronger relationships with Muslims, internationally and with Islamic leaders in the United States.

At the same time, however, militant Islamic propaganda has been a factor in recent terrorist attacks and foiled attempts in this country.

Major Nidal Hasan, the suspect in 2009 shootings at Fort Hood, Texas, is believed to have been inspired by the Internet postings of violent Islamic extremists, as was Faisal Shahzad, who pleaded guilty to terrorism charges in the attempted car bombing in Times Square.

After he took office, Obama pledged a new beginning in the US relationship with the Muslim world. His national security strategy dropped rhetorical references to Islamic radicalism, as Obama said that such inflammatory language linking Islam to the terrorist threat feeds Al Qaeda propaganda and could alienate moderate Muslims.

The White House is close to finalizing a strategy for countering violent extremism. McDonough leads a group of federal agencies and offices focused on finding ways to confront the problem.

Yesterday, McDonough said the strategy would involve continuing efforts to understand the process of radicalization, as well as further outreach to Islamic communities in the United States.

The first Muslim elected to the House, Representative Keith Ellison, said that although it’s proper to investigate radicalization, he thinks it is wrong to single out one religion.

“To say we’re going to investigate a religious minority, and a particular one, I think is the wrong course of action to take,’’ said Ellison, a Minnesota Democrat.