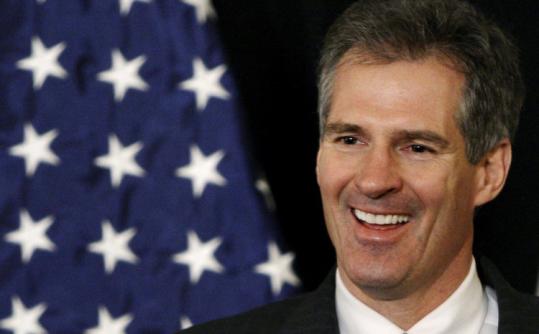 WASHINGTON — Candidate Scott Brown campaigned as the potential 41st GOP vote to halt President Obama’s health insurance overhaul. Now, after his first full year as a US senator, Brown is helping the president make the new law more palatable to its critics.

Although Brown insists he still opposes the overall health care measure, his bipartisan plan embraced by the president is one of the most visible examples of Brown’s willingness to rebuff his Tea Party movement roots and work in the Senate as a compromiser. With a voting record similar to those of Susan M. Collins and Olympia J. Snowe, the moderate Republican senators from Maine, Brown is now firmly ensconced among the small group of Senate centrists who stand as potential power brokers in the era of divided government.

“This is the moderates’ time in the Senate. It’s their time to be the deal mak ers,’’ said Jim Kessler, vice president of policy for Third Way, a center-left think tank that advocates moderate Democratic policies. “Scott Brown is definitely one of the players.’’

The full extent of Brown’s evolution was highlighted this week when Obama — in a move that could help deflect criticism from states — endorsed a measure cosponsored by Brown to relax some of the biggest mandates in the health care law, including the requirement that nearly all Americans purchase medical insurance.

Despite his bipartisan effort to change it, Brown said, he remains against the president’s reforms: “I’d like you to get this very clear: I’m opposed to the health care bill. I always have been. I’ve already voted to repeal it.’’

He said he sees no conflict between wanting a full repeal and cooperating with Democrats to make the law more palatable to states and businesses. “Do we do nothing? I want to repeal it and until we get to that point I’m going to keep chipping away,’’ Brown said.

His work on revising the law is among the more dramatic aspects of Brown’s ideological evolution, embedded in a political reality: Brown must secure support from Massachusetts independents and the state’s conservative, working-class Democrats — the political offspring of the “Reagan Democrats’’ of the 1980s, Brown himself says — if he is to succeed in his reelection bid next year.

“Brown is courting the split-ticket voter,’’ said Garrison Nelson, a political scientist at the University of Vermont, referring to voters who pick and choose candidates between the parties. He said that Massachusetts, looking like a solid Obama state in the 2012 election, will see a lot of the president next year.

“Massachusetts is one of Obama’s major ATMs and he’s going to be there often,’’ said Nelson. “Brown does not want to be seen as overly hostile to the president or he’s going to get wiped out in that tide.’’

Brown tapped into full-throated Tea Party anger at the White House to emerge from his state Senate post on Beacon Hill and snatch the late Edward M. Kennedy’s seat from the Democrats. Since then he has embarked on a steady shift to a more bipartisan, central role — an adjustment to the long-term necessities of being a Republican in a blue state.

Brown, for his part, steadfastly refuses to be labeled. He declined repeated requests for an extended interview to discuss his Senate record on issues or his ideological leanings. In a brief conversation with a reporter outside the Capitol, he refused to call himself centrist or moderate.

“All I know is I will work with anybody who wants to get our debt and deficit in order and wants to tackle the very real fiscal and financial problems that we have — regardless of who they are,’’ he said.

Further marking his independence this week, Brown joined Snowe and Collins in declining to sign a letter from 42 Senate Republicans asking Obama to withdraw his nominee to head Medicare, former Harvard professor Donald Berwick. The president installed Berwick to head the agency with a recess appointment, but he has not been confirmed by the Senate.

Tea Party activists who supported Brown’s candidacy in 2010 are repelled by such positioning, and they began abandoning him last year. Shelby Blakely, a spokeswoman for the Tea Party , said she believes Brown is entrenching himself in the political center because he knows he cannot count on impassioned support or financial contributions from national conservatives.

The group of centrists in the Senate changes from issue to issue, said Kessler. On the Democratic side, it sometimes includes Tom Carper of Delaware, Jeanne Shaheen of New Hampshire, Mark Warner of Virginia, Kent Conrad of North Dakota, Ben Nelson of Nebraska, and the Connecticut independent, Joseph Lieberman. Depending on the issue, Republicans Richard Lugar of Indiana, Bob Corker of Tennessee, and Lisa Murkowski of Alaska have joined the group.

Brown, Snowe, and Collins were unified in their defiance of party leadership last year on four major issues, voting with Democrats in favor of a jobs bill, on a major overhaul of Wall Street regulations, on the repeal of the policy banning openly gay people from the military, and on ratifying a nuclear arms treaty with Russia.

“There are times when I think all three of us are sought after by both sides,’’ Collins said in an interview.

On Monday, the president endorsed a health care bill Brown filed with Senator Ron Wyden, an Oregon Democrat. The legislation would move up by three years, to 2014, the date when states with their own comprehensive health care programs, such as Massachusetts, can apply for waivers from federal requirements.

Wyden said the legislation he filed with Brown “significantly changes the debate over health care,’’ which has been frozen into two camps: fervent defenders of the new law, and intense opponents insisting on a total repeal.

“I think you’re starting to see emerge a third path of folks who say on a bipartisan basis that there are some opportunities to move forward and do a better job of creating choice and competition and holding down cost,’’ Wyden said in an interview.

The centrists in the Senate may be in a position to substantially increase their clout, due in part to the drubbing Democrats suffered in the last election that shrank their advantage to six seats.

“When you have tight numbers, the moderates should control the agenda,’’ said Governor Lincoln Chafee of Rhode Island, a former Republican US senator who is now an independent. Chafee in 2005 was part of the bipartisan Gang of 14, a group of mostly centrist senators who flouted their party leaders and brokered their own deal to defuse a bitter impasse over judicial nominees.

Still, not everyone is convinced that the moderates can help steer Congress toward the center.

“I’m very skeptical and pessimistic about it,’’ said Arlen Specter, a centrist and former senator from Pennsylvania who has been a member of both major parties, most recently a Democrat. Specter, in a phone interview, said the ascendant right wing of the GOP — led by the Tea Party movement — has intimidated mainstream Republicans by ousting popular GOP incumbents last year, such as Senator Bob Bennett of Utah and US Representative Mike Castle of Delaware.

Theo Emery of the Globe staff contributed to this report. Mark Arsenault can be reached at MArsenault@globe.com.