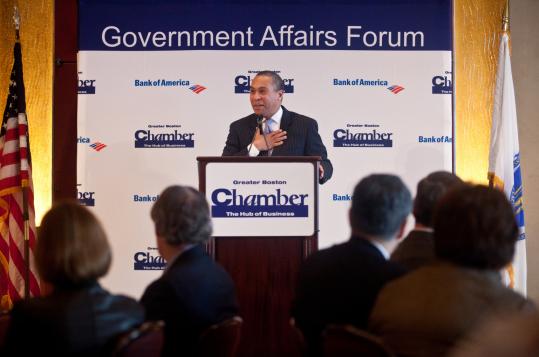 In proposing his health care overhaul yesterday, Governor Deval Patrick told the Greater Boston Chamber of Commerce that Massachusetts has “an expensive system that doesn’t provide the best care for patients and that has to change.’’ (Eric Jacobs for The Boston Globe)
By Liz Kowalczyk and Noah Bierman Globe Staff / February 18, 2011

The health care bill Governor Deval Patrick unveiled yesterday leaves many key questions unanswered, said business leaders, industry executives, and legislators, and how those issues are worked out will determine whether the proposal reins in rising costs as it promises.

The milestone legislation, which Patrick announced before a standing-room-only breakfast meeting of executives at a downtown Boston hotel, is the most comprehensive attempt by a state to transform how providers are paid and curb costs while improving care for patients. The governor said he wanted it to be a national model.

Patrick was emphatic and energetic in a speech widely viewed as crucial in setting his second term agenda.

“We have an expensive system that doesn’t provide the best care for patients, and that has to change,’’ he said, adding that restraining medical expenses is the next step now that the state has achieved nearly universal health insurance coverage. “Something must be done about costs.’’

The governor’s primary goal appeared to be rallying support for the grueling work ahead of agreeing on important details, though he outlined the major components of his proposal. It would give him the authority to scrutinize insurers’ contracts with, and fees paid to, hospitals and doctors and consider whether those fees are appropriate before approving insurers’ requests for premium increases.

His 52-page legislation affirms the administration’s plans to shift 1.7 million state employees, Medicaid recipients, and other residents with state-subsidized health insurance, 1 in 4 residents, to a new budget-minded health care payment system, in which hospitals and doctors are given a set fee for each patient’s care. It also encourages the private insurance market to make the same transition to new ways of reimbursing providers.

It would establish standards for groups of hospitals and doctors called accountable care organizations, which are expected to become common as providers band together to treat patients and coordinate their care for a budgeted fee, splitting these so-called global payments. The bill would give the insurance commissioner the authority to regulate accountable care organizations and the attorney general the power to examine provider consolidation for potential antitrust problems.

Legislators were generally supportive, but made it clear that the proposal will undergo, in the words of House Speaker Robert A. DeLeo, “a long, involved debate process, with extensive fact-finding.’’

“It’s very complicated, and we’re going to take our time and go through it,’’ said Senate President Therese Murray. “We will have questions about a lot of things.’’

Murray, who last year scrapped her own plans to file health care cost-control legislation when legislators and the administration could not agree on details, said, for example, that it is unclear whether the insurance commissioner will review provider contracts for quality indicators, as well as excessive fees, and how the commissioner will manage to review the dozens of contracts in the market.

She also questioned whether an 18-member advisory board the governor wants to establish will be unwieldy and will have any real power over the administration’s decisions about the best ways to control health care costs.

House majority leader Ronald Mariano said there has to be more public education, because changing the system will only work if people feel they are getting good-quality care, even if it costs less.

“We heard a lot about incentivizing providers; we have to incentivize consumers,’’ he said.

Patrick made it clear that the growing burden of health care on employers and consumers is not acceptable. He pointed out that spending on medical care now uses 40 percent of the state budget and that, by 2016, the average family will spend a third of its income on health care.

In part, Patrick blamed the way providers are now paid, called fee for service, which is widely viewed as lacking coordination and driving up costs by encouraging unnecessary tests and procedures. Most doctors and hospitals receive a negotiated fee for each procedure and visit; the more treatment they provide, the more they collect.

“We’ve had 25, 30 percent premium increases year after year, especially for small businesses and working families; that’s over,’’ he told reporters after his speech.

Health insurers have blamed providers for much of the increases, saying hospitals and doctors’ groups with clout, because of their reputation or geographic isolation, have demanded large fee increases while patients’ use of medical services has soared.

Patrick’s legislation stops short of setting provider rates, but it would give the administration an indirect say over those rates through the insurance commissioner’s review.

“We have a big stick on us today,’’ said Andrew Dreyfus, chief executive of Blue Cross Blue Shield of Massachusetts, who Patrick pulled in to stand beside him and help field questions from reporters after the speech. The commissioner’s review puts “added pressure on us to force hospitals and physicians to moderate the increases that they ask for from us. It’s very clear from the governor that if that doesn’t happen, it’s likely we’ll see even bigger sticks coming our way.’’

Inspector General Gregory Sullivan said he would push for the insurance commissioner to have strong enforcement powers over making sure fees paid to providers are reasonable, while many providers are expected to lobby for exactly the opposite.

“They’re saying this is not price regulation,’’ said Joe Alviani, vice president for government affairs for Partners HealthCare, the parent organization of Massachusetts General and Brigham and Women’s hospitals, large influential Harvard teaching hospitals that have been able to demand some of the highest prices in the market. But, he said, the powers of the commissioner will test that premise.

Other interested parties signaled what they will focus on as the bill moves through the Legislature.

The Massachusetts Hospital Association was disappointed that the proposal did not contain a plan for raising Medicaid fees to providers, which it contends are far below the cost of caring for patients.

“If we are able to take cost out of the system from hospitals and the state never steps up and pays its share [for Medicaid], that’s unfair,’’ said association president Lynn Nicholas.

Dr. Alice Coombs, head of the Massachusetts Medical Society, which represents doctors, applauded the bill for proposing changes to the medical malpractice system, including barring a doctor’s apology to a patient for a medical error from being used as evidence against the doctor in a lawsuit. But, she said, rules must not penalize doctors who are unable to afford the expensive electronic medical records necessary to coordinate care and manage global payments.

“If one doctor decides to retire because the rules are too complex, that leaves a community with one less primary care physician,’’ she said.