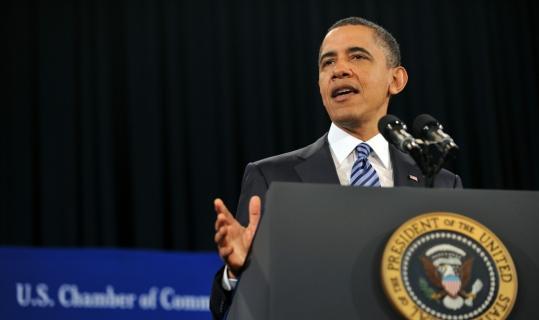 President Obama addressed the US Chamber of Commerce in Washington yesterday, trying to improve his standing with the group that has spent millions to oppose much of his agenda. (Tim Sloan/AFP/Getty Images)
By Donovan Slack Globe Staff / February 8, 2011

WASHINGTON — President Obama, who bitterly battled the US Chamber of Commerce during the first two years of his presidency, yesterday offered himself as an ally of the powerful business group who will reduce regulations and fight for more investment tax breaks.

In return, Obama urged businesses to “get off the sidelines’’ and stop hoarding $2 trillion in reserves, and instead shift that money to hire millions of Americans, invest in innovation, and drive the economy into high gear.

The president also used his address to the US Chamber here to renew his commitment to an increased, permanent federal tax credit for research and development, a potential boon for Massachusetts with its high concentration of academic and research institutions.

Bay State business groups praised Obama’s emphasis on tax credits that could help biotechnology and other cutting- edge businesses. “We were especially excited to see that focus,’’ said Jim Klocke, executive vice president of the Greater Boston Chamber of Commerce, which is not affiliated with the national group.

Paraphrasing words from the inaugural address of President John F. Kennedy, Obama exhorted businesses to invest in new jobs. “Ultimately, winning the future is not just about what the government can do to help you succeed,’’ he said. “It’s about what you can do to help America succeed.’’

While the president said he was open to revising or eliminating regulations, he also stressed that many regulations are necessary and he stood behind his national health insurance plan, which the US Chamber tried to defeat.

Eddie Vale, a spokesman for the AFL-CIO, said labor was pleased with Obama’s challenge to business to do its part in moving the economy forward and his pledge to retain regulations that protect Americans.

Obama and the US Chamber have a rocky history. The group spent tens of millions of dollars trying to oppose much of Obama’s agenda, including the creation of a consumer protection agency as part of the overhaul of financial regulations. Obama, in turn, accused the Chamber of taking money from foreign donors in its effort to influence the midterm elections, which the Chamber denied.

But after Republicans scored big gains in the midterm elections, taking over the House of Representatives and increasing their numbers in the Senate, the president has tacked noticeably toward more business-friendly policies. Obama appointed a top executive from , William Daley, as his new chief of staff, and shifted his rhetoric from bashing Wall Street “fat cats’’ to pledging in his State of the Union speech to work together with business interests.

The address yesterday at US Chamber headquarters, across Lafayette Square from the White House, was perhaps the most notable indication to date of his new approach to corporate interests — and a departure from that rocky beginning.

“I strolled over from across the street, and look, maybe if we had brought over a fruitcake when I first moved in, we would have gotten off to a better start. But I’m going to make up for it,’’ Obama said as the audience chuckled.

The Obama administration is searching for ways to lower the national unemployment rate, which stands at 9 percent, without seeking another expensive stimulus package, which Congress is unlikely to approve. That has led the White House to eye the growing profitability of corporations, many of which are sitting on piles of cash that could create new jobs.

“If I’ve got one message, my message is: Now is the time to invest in America,’’ Obama said. “Today, American companies have nearly $2 trillion sitting on their balance sheets. And I know that many of you have told me that you’re waiting for demand to rise before you get off the sidelines and expand, and that with millions of Americans out of work, demand has risen more slowly than any of us would like.’’

Obama then beseeched the business leaders to heed reports of their own economists and salespeople who “are now forecasting a healthy increase in demand. So I just want to encourage you to get in the game.’’

The president stressed that his administration has started work on revising regulations that may be hindering business growth, including the review process for medical devices and the process for patenting innovations. He said the Environmental Protection Agency has delayed implementation of greenhouse gas permitting rules for biomass, pending further analysis.

He also said he has already pledged to try to reform what he called “a burdensome corporate tax code with one of the highest rates in the world.’’

In Massachusetts, industry groups praised the president’s vow to make the research and development tax credit permanent, considering the country’s massive deficit and the promises from Obama and Congress to slash spending.

A permanent tax credit for research and development — totaling an estimated $100 billion over 10 years — was proposed by Obama in September. Congress in December passed the latest in a series of temporary extensions, but that is set to expire at the end of this year.

“We were encouraged by his State of the Union speech and this just follows up on that,’’ said Robert K. Coughlin, president of the Massachusetts Biotechnology Council, which represents about 600 groups, including academic institutions and medical centers as well as small biotechnology and large pharmaceutical companies.

Just minutes before the president began his address, Republicans on Capitol Hill released more than 100 letters from companies and trade groups outlining regulations and taxes that they believe are hindering job growth. Among them were groups representing interests that are integral to the Massachusetts economy, including the national Biotechnology Industry Organization, the Financial Services Roundtable, and the American Hospital Association.

Stephen J. Ubl, president of AdvaMed, which represents companies that manufacture medical devices and have facilities in the Bay State, objected to a new 2.3 percent tax on the devices, set to take effect in 2013.

The Hospital Association cited a lack of antitrust guidelines that cover merging of medical institutions. Association president Richard Umbdenstock said the Federal Trade Commission instead has issued lengthy opinions on individual cases that are not applicable to other deals. He also noted “overly complex’’ rules governing incentive programs for adoption of electronic recordkeeping systems.

The Financial Services Roundtable said it is concerned by certain clauses in the recently passed overhaul of financial regulations, including restrictions on fees that banks can charge merchants who want to accept credit cards. The Roundtable said the fees are not high enough to cover costs.

The letters were written to Representative Darrell Issa, Republican of California, who took over as chair of the House Committee on Oversight and Government Reform last month. Kurt Bardella, a spokesman for Issa, said yesterday the committee is planning to spotlight regulations that should be revised and the effort will be “in concert’’ with Obama’s administration.