Party looks to boost its ranks in 2012 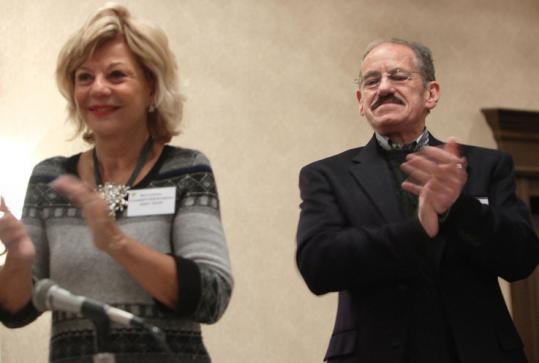 MILFORD — Although US Senator Scott Brown did not appear at yesterday’s state GOP Growing Grassroots conference in Milford, the lingering celebration of his longshot election last year was evident among the 425 in attendance. People wore Brown sweatshirts, proudly displayed Brown buttons on their winter coats, and called his campaign a blueprint for future Republican gains in Massachusetts.

“We need to build on what Scott did, but reach into other races as well and keep the momentum going,’’ said state Senator Bruce Tarr, Senate minority leader from Gloucester.

During a day when they sipped coffee and listened to elected officials such as Tarr offer tips about local campaigning, GOP activists also gathered in small groups to discuss the successes and failures of last November’s election.

While Republicans failed to unseat Governor Deval Patrick or any of the incumbent Democratic congressional delegation, they gained 16 seats in the state Legislature, raising their number there to 31. In the 40-member state Senate they lost one seat, dropping the total number of Republican senators to four.

Even with the renewed interest in the Republican Party — the state GOP committee raised $4 million last year despite representing 11 percent of registered voters — the wave of the Brown victory didn’t carry over into GOP congressional, gubernatorial, or state Senate wins last year. Elected officials such as Tarr acknowledged that their party has to do a better job identifying independent voters and getting them to the polls.

Other Republican leaders such as Ron Kaufman, the longtime confidant to President George H.W. Bush, believe 2012 could be a banner year for the state GOP. He pointed to Brown’s upcoming reelection campaign, last November’s gains by Republican state representatives, and the possibility of having former governor Mitt Romney on the presidential ticket.

“For us, it’s about getting the message out,’’ said Kaufman, who added that GOP candidates would focus on the economy and their opposition’s record next year. “If you look at the last three speakers of the House in Massachusetts, they’ve all been indicted for one problem or another. The state’s in a fiscal mess, deeper in debt; cuts are going to be terrible. The message is going to be restore sanity and elect Republicans.’’

Addressing the Republican activists and elected officials, House minority leader Brad Jones, of Reading, also said his party would publicize former House speaker Salvatore F. DiMasi’s upcoming trial on charges of extortion in the spring. And Republicans would remind voters in 2012 about the federal probe into the Massachusetts Probation Department, he said.

To date, no Republican candidate has announced plans to run for Congress next year.

Jennifer Nassour, the Massachusetts Republican Party chairwoman, said the party established 90 new Republican city and town committees over the past year. She called the local organizations important foundations, which help coordinate everything from fund-raising to identifying new candidates. “We need them and we need their activism,’’ she said.

With grass-roots campaigning the subject of the day, former candidates and activists debated the best way to reach voters. Peter Durant, who is gearing up for a new election for state representative in Central Massachusetts, said the best way to reach voters is to knock on their doors. “It’s Campaigning 101; it’s not really rocket science,’’ said Durant, who learned last Tuesday that a Worcester Superior Court judge had declared his race against state Representative Geraldo Alicea a tie and ordered a new election.

Inside one of the conference rooms, Brad Marston discussed the importance of social media in elections. Marston ran unsuccessfully against Boston and Cambridge state Representative Martha M. Walz last year but said he still was able to raise $29,000 — and credited Internet sites for helping to bring in donations.

Steven A. Rosenberg can be reached at srosenberg@comcast.net.