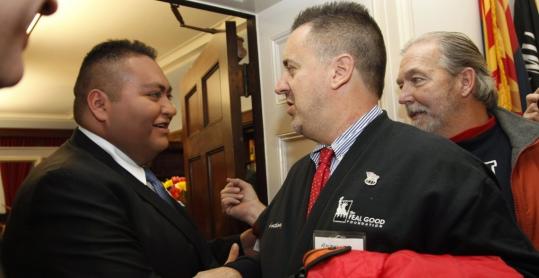 Daniel Hernandez (left), credited with helping save the life of Representative Gabrielle Giffords, was thanked yesterday by first responders to the Sept. 11, 2001, attack in New York. (Jason Reed/Reuters)
January 26, 2011

WASHINGTON — The nation faces a crushing burden of debt and is on course for an economic disaster without dramatic action to wrestle the budget deficit under control, said Paul Ryan, House Budget Committee chairman, last night in the Republican response to President Obama’s State of the Union address.

And such spending cuts must start immediately as the price of getting GOP conservatives to cast a painful vote to increase the government’s ability to borrow to pay its bills this spring, Ryan said.

“Our nation is approaching a tipping point. We are at a moment, where if government’s growth is left unchecked and unchallenged, America’s best century will be considered our past century,’’ Ryan said in televised remarks.

“The days of business as usual must come to an end. We hold to a couple of simple convictions: Endless borrowing is not a strategy; spending cuts have to come first,’’ Ryan added.

Ryan is the point man in the new House GOP majority’s drive to rein in spending and bring the budget closer to balance. Last night’s speech was the highest profile assignment yet for a former congressional staff aide who has evolved into one of his party’s brightest stars.

Ryan, who often peppers his speeches with straight talk about the need for painful cost curbs to benefit programs, did not offer such “tough love’’ last night.

Speaking from a budget panel hearing room that will be the focal point in the upcoming battle over cutting spending, Ryan echoed familiar GOP arguments.

“We need to reclaim our American system of limited government, low taxes, reasonable regulations, and sound money, which has blessed us with unprecedented prosperity,’’ Ryan said. “And it has done more to help the poor than any other economic system ever designed.’’

Ryan’s sentiments were repeated by numerous Republicans across the Capitol, who said Obama’s proposal for a five-year freeze on the operating budgets passed by Congress each year for domestic Cabinet agencies doesn’t go far enough.

Tucson attack has presence in the chamber After all the chatter over who would sit with whom and where, one empty seat offered the most poignant message.

Members of the Arizona congressional delegation left a seat open last night on the House floor for colleague Gabrielle Giffords, the congresswoman who is in a rehabilitation center half a country away, attempting to heal after being shot through the head in an assassination attempt on Jan. 8.

The seat was one of many reminders of the shooting rampage in Tucson.

Guests of Obama included John and Roxanna Green, the parents of 9-year-old Christina, who was born on 9/11 and died in the Tucson attack; Daniel Hernandez, an intern of Giffords who helped clear the wounded congresswoman’s airway and held her until medics arrived; and members of the Tucson medical team — trauma surgeons Peter Rhee and Randall Friese, neurosurgeon Michael Lemole, and nurse Tracy Culbert — who attended to Giffords and other victims.

Below them in the audience, Republican and Democratic lawmakers sat elbow-to-elbow rather than the traditional party ranks. Black-and-white ribbons, signifying the deaths of six Tucson victims and the hopes of the survivors, were to be pinned to lapels across the chamber.

Majority of justices attend State of the Union address Supreme Court Chief Justice John Roberts and five other justices attended the address, ensuring a bipartisan delegation at an event that last year drew the justices into a controversy.

Roberts had questioned whether justices should continue attending the annual event, likening it in March to a “political pep rally.’’ He sat passively last year as Obama drew a standing ovation from congressional Democrats by criticizing the court’s just-issued campaign finance ruling.

Those comments from Roberts had created the prospect that the court’s delegation might consist entirely of Democratic appointees.

Roberts is “taking the high road,’’ said Barbara Perry, a Supreme Court scholar at the University of Virginia’s Miller Center of Public Affairs. “He is going to follow in the footsteps of those who have kept the court at the very highest level of the public’s faith and confidence.’’