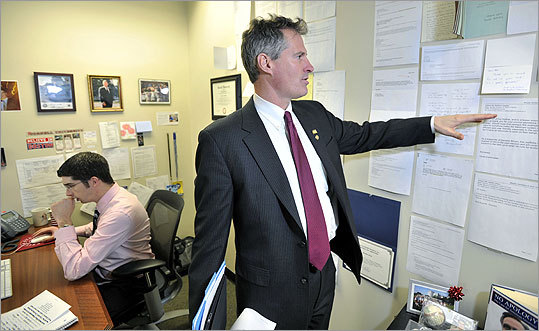 WASHINGTON — Senator Scott Brown, seeking to leverage his upcoming memoir for maximum political gain, has asked regulators whether he can intertwine activities related to his book tour with some of his reelection efforts.

Daniel B. Winslow, a lawyer for Brown’s campaign committee and a state representative from Norfolk, is asking the Federal Election Commission whether Brown can tap his campaign account to buy copies and distribute them to supporters.

“The committee proposes to use campaign funds to purchase up to several thousand copies of the book to be used solely in campaign-related activities, such as distributing signed and unsigned copies to financial contributors and other ‘political supporters’ as ‘thank you’ gifts,’’ Winslow wrote.

The campaign would either forgo royalties from any sales of the campaign-related purchases or would donate the money to charity, Winslow wrote. That would allow Brown to avoid violating laws that prohibit candidates from using campaign funds for personal financial benefits.

Brown’s book — “Against All Odds: My Life of Hardship, Fast Breaks, and Second Chances’’ — is set to be published next month by HarperCollins, and the Massachusetts Republican is planning to launch a national book tour during the Senate’s February recess. The book’s contract has been approved by the Senate’s select committee on ethics.

Brown’s office declined to comment on the FEC request, but campaign finance watchdogs said it appeared to be fairly standard.

“It’s clear from the paperwork filed with the FEC that Senator Brown’s lawyers are taking this seriously and doing everything to stay on the right side of the law,’’ said Paul S. Ryan, an attorney at the Campaign Legal Center. “There’s some close calls here in terms of the nitty-gritty fine lines [of campaign finance law], but there are no major red flags.’’

Brown is also asking the FEC whether he can hold fund-raisers during his publisher-sponsored book tour — and, if not, whether he could reimburse the publisher for portions of the trip that involved campaign fund-raising.

“The committee would like to maximize the political benefits of promoting Senator Brown’s book by leveraging these social media sites,’’ Winslow wrote to the commission.

Using memoirs to advance a politician’s career is nothing new — President Obama’s books became best-sellers and brought him financial and political fortunes — nor are ethical requirements around them.

When Senator Joseph Lieberman, the Connecticut independent, sought to give away copies of his memoir, “In Praise of Public Life,’’ in 2004, he declined to take royalties from books purchased through his campaign.

Former Alaska governor Sarah Palin also used her political action committee to buy thousands of copies of her book, “Going Rogue.’’ She then mailed copies to her donors. Her campaign spent more than $63,000 for “books for fund-raising donor fulfillment,’’ according to ABC News.