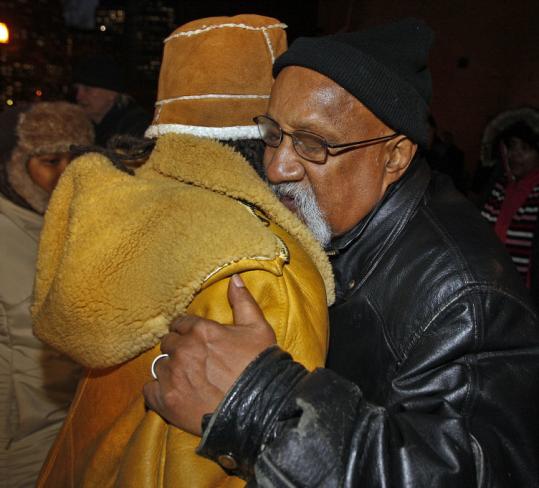 Chuck Turner may have incurred the wrath of the court yesterday in his sentencing, but the former city councilor continued to receive support among many people in his home district.

Two men smoking cigarettes chatted in disbelief in front of a convenience store.

“It’s wrong,’’ said Stewart Estes, 51. “With all the other political corruption going on, for them to do that to him is wrong.’’

There was a change in tone yesterday. Instead of proclaiming Turner’s innocence, the subject of emotional and racially charged rallies, most people said they thought Turner was guilty of accepting a bribe. It was the length of the sentence they took issue with.

“He’s guilty,’’ said a 48-year-old truck driver who asked to be identified only as Lenny E. “They’re saying he lied, and that’s why he’s doing the time. He is guilty, and he didn’t want to admit it. “It’s kind of harsh, because of the type of crime,’’ he said of the sentence. “There’s people that get out sooner with gun charges.’’

A federal jury convicted Turner in October of attempted extortion and three counts of providing false statements to FBI agents over a $1,000 bribe given to him by businessman Ronald Wilburn. The FBI paid Wilburn to go undercover and covertly record payoffs he made to Turner and former state senator Dianne Wilkerson for help in obtaining a liquor license for a Roxbury nightclub.

Wilkerson pleaded guilty to repeatedly accepting bribes totaling $23,500 and was sentenced to 3 1/2 years in prison earlier this month by US District Judge Douglas P. Woodlock

In a letter to Woodlock, Wilkerson took responsibility for her crimes and apologized.

Turner, however, has been defiant and has maintained his innocence. He blamed his conviction on a government conspiracy to discredit black politicians. Despite being found guilty of taking less money, the same judge, Woodlock imposed the tough sentence yesterday.

The Turner case was discussed in many city classrooms, including an Advanced Placement government and politics class at City on a Hill Charter School, where Obi Onwuamaegbu, 17, is a senior.

As he stood on a Roxbury sidewalk yesterday waiting to meet his friends, Onwuamaegbu said Turner was lured into the crime.

“Yeah, it’s against the law, but if you’re having people look for you to do that, they’re going to keep tempting you and giving you a whole bunch of situations that will make you likely to take it,’’ he said. “I don’t think he was looking for it, but they kept on coming to him. Somebody had it out for him.’’

“I think it was racial,’’ Aubrey said. “He’s black, and he was loved by the community, and they wanted to get the black guy out of office.’’

“I disagree,’’ interjected Tanajah Bierre, 17, walking home from school with Aubrey. “I think, especially when you are in office, you know what is right and wrong. You are elected, and people respect you. To take a bribe, it’s not right, regardless of race and nationality, especially when people look up to you.

“He’s not the first person to do it. They were a little harsh on him but some type of punishment was in order.’’

“Yeah, I can agree with that,’’ Aubrey said.