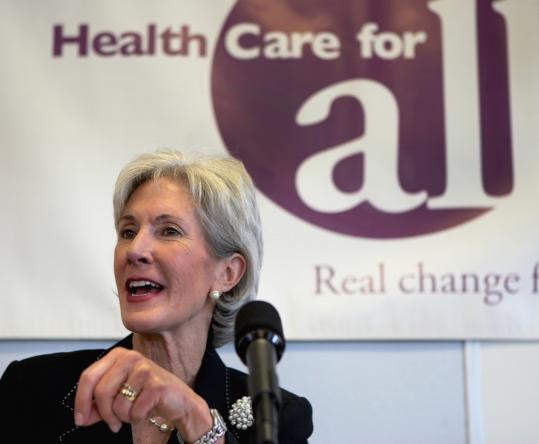 The Obama administration has launched an all-out defense of its health care law just days before the US House is slated to vote on repeal, with US Secretary of Health and Human Services Kathleen Sebelius visiting Boston yesterday, one of many dispatched across the country to highlight benefits of the overhaul.

“People keep calling this political theater,’’ Sebelius said, alluding to the repeal vote, “but unfortunately the theater has huge consequences for the American public.’’

Sebelius is among the highest-profile combatants in the administration’s effort to rebuild support for the legislation. The strategy relies heavily on publicizing provisions the White House says are helping the public, such as lower drug costs for seniors and a ban on in surance companies denying coverage to children with preexisting medical conditions.

Officials from the Massachusetts office of the US Department of Health and Human Services sought to bolster Sebelius’ case yesterday by releasing estimates that more than 9,800 young adults here would lose insurance coverage through their parents’ health plans if the law is repealed.

The officials also said that nearly 4.5 million state residents with private insurance would be subject to lifetime limits on how much insurance companies spend on their health care, which is forbidden under the law.

The Republican-controlled US House is expected to easily approve a repeal bill, probably on Wednesday.

“The American people want us to focus on cutting spending and growing our economy, and that is what repealing the health care law is all about,’’ House Speaker John Boehner said yesterday. He said he wants to replace the law with “common-sense reforms that will reduce the cost of health insurance in America.’’

Although the effort is expected to die in the Democrat-controlled Senate or be vetoed by President Obama if it passes both chambers, Republicans are holding the high-profile repeal vote as one of many tactics designed to weaken and eventually kill the law. Opponents have also launched lawsuits in federal courts, and the GOP plans to use its strengthened legislative powers to try to stop funding for key provisions.

As a result, the repeal effort is being taken seriously by Democrats, many of whom sought to avoid the issue during midterm elections because the reform package polled poorly. But now, with Obama’s top legislative accomplishment at stake, Democrats and allied interest groups are planning a campaign-style push to strengthen support for the law through rallies, advertisements, and appearances by top administration officials.

The fight over the implementation of the legislation has high stakes for both parties. Republicans won crucial support from Tea Party movement activists, and took over the House, in part by fighting against the measure. Democrats are increasingly under pressure to demonstrate that the legislation will fulfill Obama’s promises to bring down health care costs while insuring many more Americans.

Polls taken after the passage of the health reform law showed it has been generally unpopular. Forty-six percent wanted the law reversed, according to a Gallup survey this week, while 40 percent opposed repeal.

But Democrats noted that the public strongly favors elements of it. A number of provisions have taken effect, including a prohibition on insurance companies denying coverage to children because of preexisting conditions. Insurers may no longer cancel plans when people get sick or impose lifetime caps on coverage. The law also allows children to stay on their parents’ insurance until age 26.

By 2014, the law will require most people to have insurance.

“I think it’s so easy’’ to defend, Senator Sherrod Brown, an Ohio Democrat, said in an interview. “You’ve got a bunch of Republican politicians, who have been benefiting from taxpayer-financed health care for their careers, guaranteeing that seniors will pay higher drug costs and taking away their annual physicals, and telling 22-years-olds to ‘get off your parents’ insurance.’ ’’

Republicans see the debate differently, coming off a big win in the midterm election.

“That was a big vote that helped Republicans into power in 2010,’’ said Ron Bonjean, a Republican political strategist. “Republicans are voting against the entire bill in which there is more bad than good. An argument can be made that the few parts that seem like good pieces can be taken out and passed again.’’

“While the recently passed health care law has numerous flaws and fails to reduce health care costs, [Lynch] believes that we should spend our energies trying to fix those flaws,’’ the Democratic congressman’s office said in a statement. “Congressman Lynch does not support the Republican effort to go back to the old broken system.’’

The two senators from Massachusetts remained on opposite sides of the issue.

Republican Scott Brown supports the repeal effort, “because in Massachusetts we already have a health care law that covers everyone without raising taxes or cutting care to seniors,’’ Brown said in a statement.

But Democrat John Kerry said repeal would “take away health insurance from 32 million Americans, increase taxes on thousands of small businesses, and add over one trillion dollars to the deficit.’’

Implementation of the law has been bumpy. Some state officials have complained about the possible costs of an expansion of Medicaid. Several states have sued to halt implementation, contending the mandate that most people buy insurance by 2014 is unconstitutional.

Democrats said they are open to revisiting the law to improve it, such as dealing with the increasing cost to expand Medicaid coverage, according to Senator Joe Lieberman of Connecticut, an independent who is part of the Democratic caucus.

The individual mandate to obtain insurance, however, must stay in the law, he said in an interview. “You can’t just take that out and expect the rest of the system to hold.’’

The politicking of the next week could be the first blows of a long fight over Republican efforts to strangle the law by denying money for implementation in the federal budget, said Robert Blendon, a professor at Harvard University School of Public Health and a specialist on voter sentiment about medical care.

“The Republican theme after this [repeal] vote is not going to be about ending health care, it’s going to be about reducing government spending,’’ he said. “There’s a lot of money for various subsidies in the law, and they’re going to argue that we can’t afford them.’’