LePage pledges to put people ahead of politics 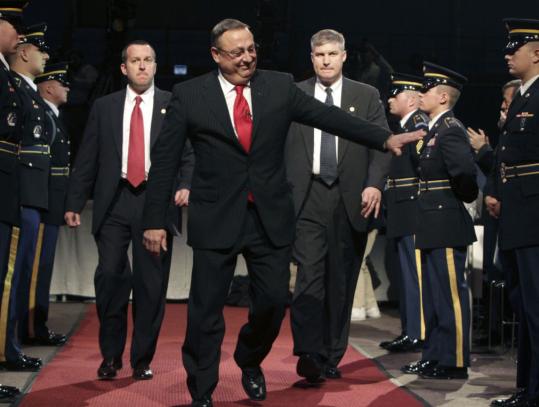 AUGUSTA, Maine — Joined by his family on stage, Paul Richard LePage completed a story of personal triumph and Maine’s political transformation yesterday, as he was inaugurated before a joint session of the Legislature, becoming the state’s first Republican governor in 16 years.

“My pledge to Maine people is very simple: It’s going to be people ahead of politics,’’ LePage said to a roar of approval from more than 5,000 spectators at the Augusta Civic Center.

LePage, 62, was written off as a State House outsider early in last year’s crowded gubernatorial race but was later buoyed by a wave of voter frustration with the status quo. He is now Maine’s first Republican governor since John McKernan left office in 1995 and the first GOP chief executive with a Republican-controlled House and Senate in nearly half a century.

The crowd rose to its feet when LePage mentioned what he described as a bloated state government.

LePage’s address, interrupted by applause more than 40 times, lasted 24 minutes and contained no new policy announcements. The event represented a departure from past practice by being staged in the daytime with four past governors — two Democrats, one Republican, and one independent — on the stage. In keeping with the mood of economic austerity, LePage decided to skip an inaugural gala in favor of a simpler, same-day reception.

In his address he cited a woman who rose from poverty with some government assistance, but mostly through hard work, as an illustration of his desire to create a culture in which individuals can succeed with public assistance if needed, but without long-term dependence on social programs.

He pushed his people-first theme repeatedly.

“The word people appears in the Maine Constitution 49 times,’’ he said. “You cannot find a single mention of the words politics, Republican, Democrat, Green, or Independent ’ in 37 pages of preambles, articles, and sections of our Constitution. The framers had it right.’’

LePage pledged to listen to and work constructively with anyone bringing forth sincere solutions to the state’s problems, which include a looming revenue shortfall estimated in the $1 billion range in a state budget that has already been whittled by hundreds of millions of dollars in recent years.

To bring government closer to the people, the new governor promised to reintroduce the Capitol for a Day program initiated by McKernan, in which town hall meetings were held in each of Maine’s 16 counties.

“We are going to get around and learn from the people of Maine,’’ said LePage, who also promised to host constituent service hours to meet directly with Mainers.

“We do not expect to agree with the governor all of the time, but we do expect to agree on a thoughtful and inclusive approach to find the best solutions to the problems facing Maine people,’’ House minority leader Emily Cain of Orono said in a statement.

LePage’s inauguration completes a story of personal triumph that became familiar to Maine voters before his win in a seven-way GOP primary and five-way general election race.

Once a neglected and homeless youth in his hometown of Lewiston, LePage earned a master’s degree, had a successful business career, and became mayor of the city of Waterville before launching what was viewed as a long-shot gubernatorial bid last year. LePage, whose ancestry is French-Canadian, becomes Maine’s first Franco-American to be popularly elected governor.

The governor shared the stage yesterday with immediate family members, with whom he shared high fives after the event. He was regaled with music from a marching band and an a cappella group, then ushered into the civic center by a Maine Army National Guard herald shouting the traditional, “Here ye, make way, make way.’’

Dignitaries from five countries — Canada, France, Germany, Pakistan, and Ireland — attended, as did a man who gave the young LePage a place to live after the boy who left home at age 11.

“We are very proud of you, Paul,’’ Bruce Myrick of Sabattus told the audience from the stage.