GOP takes control of the House, overhauls the rules 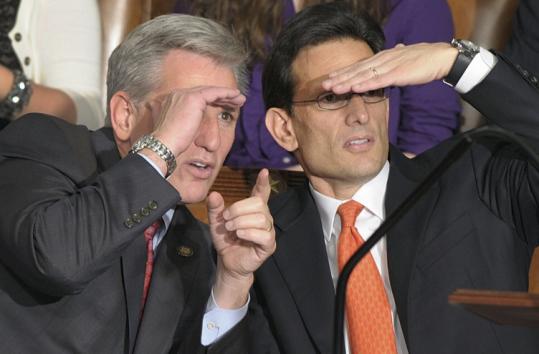 WASHINGTON — Jubilant Republicans took control of the House yesterday and installed Representative John A. Boehner of Ohio as the new speaker before pushing through an overhaul of House rules intended to ease the drive to dismantle the new health care law, cut federal spending, and provide the tax cuts they see as a way to jump-start the economy.

In the Senate, tensions over the partisan stalemate that dominated the last session spilled over into the opening of the 112th Congress as a coalition of Democrats threatened to try to force changes that would reduce filibusters and other procedural snags that have slowed the pace of legislation the past two years.

The convening of the new Congress and the first day of divided government in Washington since President Obama’s inauguration two years ago was largely one of ceremony, posturing, and preliminary procedural skirmishes. But it set the stage for partisan and ideological clashes on the size and role of government and a wide array of other issues as the nation struggles to rebuild economic momentum, confront its rapidly growing debt, and manage complex national security threats.

After accepting an oversize gavel from the departing Democratic speaker, Representative Nancy Pelosi, Boehner promised to run the chamber in a more inclusive and businesslike way. But mindful of demands by new Tea Party Republicans for decisive action to cut spending and rein in what they see as an overactive government, he set the House on a course to repeal the health law, take a deep bite out of this year’s budget, and investigate the administration’s handling of at least a half-dozen big issues over the past two years.

“The people voted to end business as usual, and today we begin to carry out their instructions,’’ Boehner told his assembled colleagues, referring to the election sweep that carried Republicans back to power in the House four years after Democrats led by Pelosi ended their domination.

Boehner said that excessive and wasteful federal spending had caught up with the nation and warned that “hard work and tough decisions will be required of the 112th Congress.

In order to reverse what they say is a congressional process tilted toward spending increases, the new Republican majority in the House — over strong Democratic objections — approved rules that would require spending increases to be directly offset with cuts elsewhere. But the rules would allow future tax cuts to be enacted without offsetting spending reductions and would permit repeal of the health care legislation, which was estimated to save the government more than $140 billion over 10 years, without any requirement that those revenue losses be made up elsewhere.

“We are going to cut spending and job-killing government regulations, and grow the economy and private-sector jobs,’’ said Representative Eric Cantor of Virginia, the new majority leader and the No. 2 Republican in the House.

Democrats criticized the changes, saying Republicans were returning to the policies that had put the government on a path to deep deficits in the first place and would open the door to “Enron-style accounting’’ that covered up the costs of tax cuts and their other legislative efforts.

Boehner, who was introduced by Pelosi as a “proud son of Ohio,’’ choked up as she introduced his wife and members of his family — including 10 of his 11 siblings — who were watching from the House gallery.

After the ceremonies, the Senate immediately plunged into a daylong debate over Democratic proposals to curtail filibusters and force senators to make public their “holds’’ that can block bills and nominations.

Republicans strongly cautioned Democrats against making any changes and warned they could face retaliation if Republicans recapture the majority. With the Senate in session just for the day, a potential floor showdown was put off until Jan. 25. Senate leaders remain engaged in talks to try to avert a rules fight that many lawmakers fear could prove disruptive.