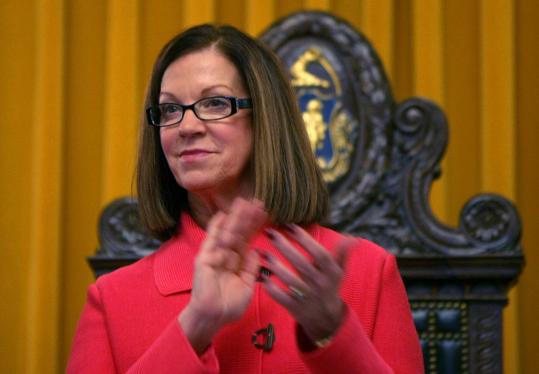 DeLeo made the pronouncements on a day of backslapping, wisecracking, and festive pomp, as members of the Legislature, nearly one-quarter of them newly elected, took the oath of office for a new two-year term.

But even as he and other lawmakers vowed to end the culture of patronage that has tarnished their reputations, there were vivid and, at times, awkward reminders of Beacon Hill’s recent history of scandal.

Just before DeLeo was overwhelmingly reelected as speaker, most, but not all of the state representatives packed into the House chamber gave a standing ovation to his predecessors: among them, Salvatore F. DiMasi, who has been indicted on corruption charges; Thomas M. Finneran, who was convicted of obstruction of justice and disbarred; and Charles F. Flaherty, who was convicted of tax evasion. DeLeo later stood with them all for a formal portrait.

There were indications that some lawmakers, far from being chastened by recent controversy, are more resolved than ever to protect their own.

Welcoming the House’s 128 Democrats back to Beacon Hill, Angelo M. Scaccia, a Hyde Park Democrat and the House’s longest-serving member, delivered a speech urging DeLeo and other legislative leaders to fend off what he said were constant attacks on the Legislature.

“Protect your members,’’ Scaccia said. “Shield them, as much as possible, from the outside world. . . . This institution is being battered from all sides, within and without, and we have to follow that leader.’’

In the state Senate, Therese Murray was reelected president and vowed to work to reduce health care costs, combat prescription drug addiction, and tackle the $1.5 billion shortfall looming for the state’s next budget year.

“We were chosen by the voting public to be here and to make those tough decisions,’’ she said.

Senate Republicans, who saw their numbers drop from five last session to four in the 40-member chamber, joked about their slim chances of defeating Murray with their candidate for Senate president, Bruce E. Tarr, who was elected minority leader instead.

“This is the impossible dream today,’’ said Robert L. Hedlund, a Weymouth Republican, comparing his ragtag group to the 1967 .

“This is our Carl Yastrzemski,’’ he said, pointing to Tarr, who, like his counterpart in the House, Bradley H. Jones Jr., got a standing ovation from Democrats and Republicans after assuming the helm of the GOP caucus.

Unlike Murray, DeLeo will have to contend with a Republican minority that has doubled in size and promises to be more vocal over the next two years.

The speaker was notably aggressive and detailed in laying out his agenda. He was visibly pleased to be back in his comfort zone, among House members, after several months of persistent questions about his role in recommending candidates, including a godson, for jobs at the troubled state Probation Department.

“What a wonderful day and what a wonderful feeling,’’ DeLeo said after his Democratic colleagues delivered speeches praising his “tremendous thoughtfulness,’’ “remarkable leadership,’’ and “unassuming and determined manner.’’

Freed from the anger and uncertainty of the election season, lawmakers basked in the inside jokes and clubby banter. During a celebratory Democratic caucus meeting, DeLeo made James J. O’Day of West Boylston take off his suit jacket to reveal a garish striped red shirt.

“What were you thinking?’’ DeLeo said to raucous laughter.

He thanked Linda Dorcena Forry, a Dorchester Democrat, for styling her hair for the occasion.

And DeLeo poked fun at Theodore C. Speliotis, a Danvers Democrat, for his reputation for long-windedness.

“I love this humor!’’ Scaccia cried.

In a formal speech in the House chamber, DeLeo embraced for the first time a proposal to force municipal workers with costly health plans to join the state health care system, even if their unions oppose the move.

State lawmakers and Governor Deval Patrick have resisted such a change, saying unions must have some voice in determining their health benefits.

But DeLeo said forcing the employees into the state plan could save $100 million as cities and towns are expected to take a cut in state aid later this year.

“Our current fiscal climate demands that we move in this direction,’’ DeLeo said. “I can no longer permit our residents to suffer because we are so slow to progress in this area.’’

Robert J. Haynes, president of the AFL-CIO of Massachusetts, said unions share DeLeo’s concern that the cost of health care is crushing state and local finances.

But he said unions will oppose any proposal to take away their right to negotiate health benefits.

DeLeo also said he wants to end patronage throughout state government, but did not outline a specific plan.

“We will make clear that all public servants must not only be qualified for their jobs, they must be the most qualified people for their jobs,’’ he said. “And we will also ensure that state hiring authorities understand that we expect that they will serve but one master, the taxpaying public.’’

DeLeo also promised to revive casino gambling legislation that died at the end of the last session in finger-pointing and acrimony. He used more conciliatory language than he has in the past, making no mention of his support for legalizing slot machines at the state’s racetracks, the major sticking point between him and the governor.

“I will work closely with Governor Patrick and Senate President Murray to devise a gaming plan which can provide much needed jobs, address the ‘blue-collar depression,’ and serve as a source of immediate local aid,’’ DeLeo said.

The governor, who supports legalizing casinos but has soured on the issue, reiterated yesterday that he is not eager to resurrect the legislation.

“It’s not at the top of my list, and, frankly, unless we can figure out some way to come to terms on some of the big differences before it’s filed, it just sucks all the oxygen out of the place, and we’ve got a lot of other work to do,’’ the governor told reporters after DeLeo’s speech.

Murray, who also supports expanded gambling, said she “suspects it will be on the agenda again’’ but may not pass this session.